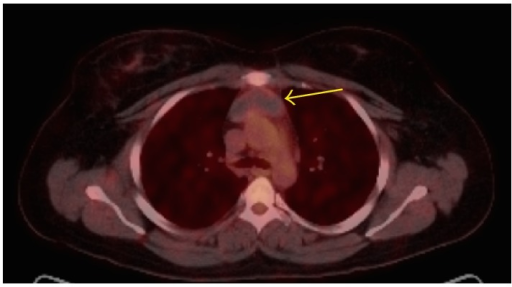 The mediastinum is a part of the chest cavity bounded by the sternum anteriorly, the vertebrae posteriorly and the medial surfaces of the visceral pleura (mediastinal pleural reflection). It is divided into:

The anterior mediastinum houses masses from the thyroid, thymus and terato-dermoid which may include pathologies such as:

The middle mediastinum is marked by pathologies such as:

The posterior mediastinum is characterized by pathologies such as:

Clinical Presentation of a Mediastinal Mass

Mediastinal masses typically present with non-specific constitutional symptoms such as fever, fatigue, and malaise. Mood changes are also common in thyroid tumors and cardiac tumors. Chest pain and dyspnea have also been reported.

The invasion of adjacent structures within the pleural cavities or a nervous plexus can give more information about the location of the tumor.

Note: In some patients, the presenting symptoms are attributed to the invaded structures’ compromise rather than the tumor itself. Systemic symptoms and paraneoplastic syndromes are also commonly seen with mediastinal tumors as a significant proportion of them can be functional.

Imaging Modalities for the Diagnostic Workup of a Mediastinal Mass

A mediastinal mass is usually first seen on conventional radiography. However, the radiological features of a mediastinal mass on a conventional chest x-ray are usually not specific enough to point towards a diagnosis. Therefore, a follow-up computed tomography (CT) scan and magnetic resonance imaging (MRI) should be performed to better visualize and characterize the mass.

Conventional MRI is usually used to visualize the tumors and sometimes characterize them. Chemical-shift MRI has been found to be superior in the differentiation between malignant thymic neoplasia and thymic hyperplasia compared to other imaging modalities. Diffusion-weighted MRI has been also used for the evaluation of mediastinal masses.

A lipoma might be confined to the thymus, known as a thymolipoma. These are benign tumors are typically seen in young adults. Thymolipomas have been linked to an increased risk of myasthenia gravis and Graves’ disease. A computed tomography scan typically reveals a well-encapsulated tumor within the thymus that consists of 50 to 70 % fat. Fibrous septa within the mass might be appreciated on MRI.

When a cystic lesion is recognized on a computed tomography scan or an MRI study, one should take caution as they might represent degenerative cystic changes of a solid tumor. Fortunately, the accuracy and quality of the images produced by high-resolution multidetector and multiplanar CT or MRI have made this error unlikely to happen in modern-day practice.

Duplication cysts are rare and they can be seen in the mediastinum. They might contain gastric or pancreatic tissue, and hemorrhage within the cyst is a possible complication.

Patients who develop pancreatitis are at risk of developing a pancreatic pseudocyst. These pseudocysts might protrude through the aortic hiatus into the mediastinum. CT will reveal a cystic mass that is fluid-filled within the posterior mediastinum. The cyst is usually in continuity with peripancreatic fluid collections.

A mediastinal goiter is an uncommon presentation of a huge thyroid goiter that has expanded to the anterior or superior mediastinum. A computed tomography scan will reveal an encapsulated tumor that is cystic and shows heterogenicity in attenuation. The continuity of the mass with the thyroid gland and the clinical presentation of the patient will help in the confirmation of the thyroid origin of the mass.

Thymic hyperplasia is seen in patients who are recovering from corticosteroid therapy, those who have received chemotherapy, and those with autoimmune disease. A computed tomography scan typically reveals a normal thymus in 40 % of the patients. Up to 35 % of the patients will have a homogenous enlarged thymus while others might have a focal thymic lesion. To differentiate between thymic hyperplasia and thymic malignant neoplasia, chemical-shift MRI is used. The main CT features suggestive of malignancy are calcifications, the nodular appearance of the thymus and focality.

On the other hand, a thymic carcinoma typically has features suggestive of necrotic or cystic degeneration on CT. They usually have ill-defined borders and do not have a capsule.

Mediastinal lymphomas are usually found within the anterior mediastinum. They appear as homogenous soft-tissue masses on CT and can be iso-intense or hyperintense on T1 and T2 weighted MRI.

Teratomas are the most common type of germ cell tumors found within the mediastinum. They are usually cystic with soft tissue and fat components. Calcifications are also common. Because of the variability of the contents of the teratoma, they appear as heterogeneous masses on MRI and CT.

Neurogenic tumors of the mediastinum are more common in children. They arise within the posterior compartment and include Schwannoma and paraganglioma. They can be well-defined or ill-defined small tumors with a homogenous appearance on CT. Cystic, hemorrhagic or calcific changes can also be seen in neurogenic tumors on CT. They typically appear as a heterogeneous mass on T2-weighted images and are hyperintense.