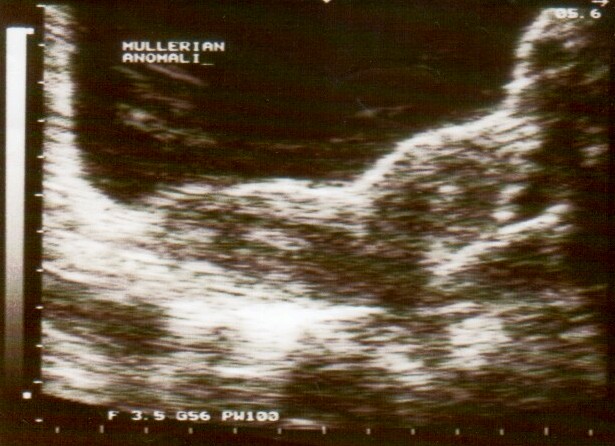 The most common risk factors for uterine anomalies are the maternal use of thalidomide or diethylstilbestrol during pregnancy. Fortunately, awareness about the teratogenicity of these 2 medications has contributed significantly to lowering the incidence of Mullerian duct anomalies.

Embryogenesis and Abnormal Development of the Female Reproductive Tract

At 6 weeks of embryological development, the male or female fetus has 2 pairs of genital ducts, known as the Mullerian and Wolffian ducts. These ducts come from a common embryonic mesoderm that gives rise to the genital system in both females and males.

At this stage, the genitourinary systems are identical and cannot be differentiated. The Wolffian duct system initially grows faster than the Mullerian ducts, forming a pathway for growth of the latter. As well, the Wolffian ducts initially drain to the primitive mesonephric kidney; there is therefore a close association between Mullerian duct anomalies and urinary system anomalies.

Regression of the Wolffian duct system is based on the absence of the testosterone-induced SRY gene found on chromosome Y. The ducts elongate in week 9 to form 3 distinct regions:

Abnormal development at any stage leads to abnormalities, including the following:

Up to one-tenth of patients with congenital uterine malformations also have associated anomalies of the urinary tract, gastrointestinal tract, musculoskeletal system, or heart. Endometriosis is more common in malformed uteri compared with normally developed ones. Renal agenesis is very common in patients with uterus didelphys and unicornuate uterus.

Despite the association with other anomalies, the risk of neoplasms in patients with congenital uterine malformations appears to be equal to that of the general population.

Ultrasound and magnetic resonance imaging (MRI) are the most common imaging modalities used to diagnose Mullerian duct anomalies, as they indicate the type of the anomaly and the presence or absence of concomitant renal malformations with high accuracy, compared with other modalities. The diagnosis of a malformed uterus can be delayed due to operator dependency of ultrasonography, the first imaging modality used in the evaluation of structural uterine anomalies in a patient with recurrent abortions. The increased incidence of spontaneous abortions and infertility may be related to the direct effect of the abnormal uterus on the implantation of the uterus, or the co-presence of cervical incompetence. Cervical incompetence is found in up to one-third of women with congenital uterine malformations.

The accuracy of transvaginal ultrasound in the identification of congenital uterine malformations is excellent, at 82%–92%. Vaginal and cervical atresia in addition to uterus didelphys is reliably identified on ultrasound. However, septate uterus, unicornuate uterus, and other less common uterine malformations are poorly visualized and recognized with ultrasonography.

MRI studies have an estimated accuracy of 100% in identifying almost any type of uterine anomalies. MRIs can identify vaginal, cervical, and uterine anomalies reliably, including septate, unicornuate, and bicornuate uterine malformations. Additionally, MRI studies of the fallopian tubes, ovaries, and other pelvic structures makes it easy for the radiologist to identify endometriosis, even in its initial stages. Standard pelvic MRI protocols employed include T1-weighted, T2-weighted, and contrast-enhanced images.

The main disadvantage of ultrasonography and MRI studies is the fact that both are diagnostic, not therapeutic.

Direct visualization of the external contour of the uterus can be helpful in differentiating between bicornuate and septate uterus. Hysteroscopy is helpful in the identification of intrauterine adhesions and septa. These 2 techniques can be also used for adhesiolysis or other treatments.

The following table outlines some common congenital uterine malformations, the imaging modality of choice for the visualization of that malformation, and the main characteristics that can be seen for each.