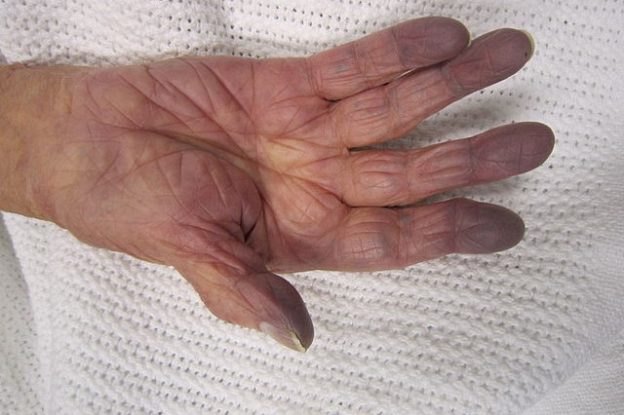 Image: “Cyanosis of the hand in someone with low oxygen saturations.” by James Heilman. License: CC BY-SA 3.0

Image: “Partial Pressure is the Force Exerted by a Gas. The Sum of the Partial Pressures of all the Gases in a Mixture Equals the Total Pressure.” by OpenStax. License: CC-BY 3.0

Atmospheric dry air is a mixture of many gases. At sea level, this air has a pressure of 760 mm Hg. The partial pressure that each gas contributes to this atmospheric pressure is based on the percentage of gas in the air.

Taking the above formula, the PO2 will be:

PCO2 is very low in the atmospheric dry air, and hence, is considered to have a partial pressure of 0 mm Hg. As the air is inspired, it is warmed to 37°C and completely humidified. The gases in the air have a slightly lower partial pressure, owing to the addition of water vapors. This air has not yet participated in gas exchange. In the alveoli, where gas exchange occurs, PO2 decreases and PCO2 increases considerably.

In an ideal system, PO2 and PCO2 of the alveolar and pulmonary capillary compartments are roughly the same. As some of the blood shunts through the lungs, the PO2 of the systemic arterial blood is slightly lower than that of the pulmonary capillaries.

The difference between PO2 of alveoli and PO2 of arterial blood is referred to as alveolar-arterial gradient (A-a gradient).

Arterial PO2 (PaO2) is measured from an arterial blood sample. Unlike PaO2, alveolar PO2 (PAO2) cannot be measured directly by taking an air sample from alveoli. Instead, an equation is used to estimate PAO2.

The above equation can be simplified when FIO2 < 1

Alveolar ventilation has an inverse relationship with PACO2.

Metabolic rate has a direct relationship with PACO2.

Hypoxia is a state of the body or a region of the body when it is deprived of adequate oxygen supply. It results from the failure of oxygen delivery to cells.

Tissue hypoxia has many diverse reasons. The mechanisms behind these causes can be summarized as follows:

Generalized ischemia results from a low cardiac output. Many heart diseases could contribute towards it. Localized ischemia, on the other hand, is caused by vascular dysfunction, as in cases of peripheral vascular disease and gangrenes. 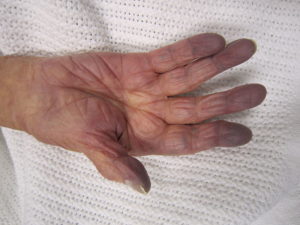 Image: “Cyanosis of the hand in someone with low oxygen saturation.” by James Heilman. License: CC BY-SA 3.0

Anemia decreases the capacity of blood to carry oxygen as lesser hemoglobin is available to bind to oxygen. This leads to a decreased supply of oxygen throughout the body.

The body has various compensatory mechanisms set in place to combat hypoxia. The immediate response includes:

If hypoxia remains for a longer duration (over 2 weeks), interstitial cells in the peritubular capillary bed of the renal cortex secrete erythropoietin. Erythropoietin will primarily target erythrocyte progenitors to induce the production of red blood cells. This improves the oxygen supply. Therefore, erythrocytosis is considered to be an important clinical sign of chronic hypoxia.

Air is inhaled into the alveoli where oxygen diffuses into the blood through the walls of the alveoli and capillaries. Hypoxemia, i.e. decreased oxygen in the blood, occurs due to dysfunction at any stage in this process.

The very first stage of respiration is inhaling an adequate amount of oxygen.

The exchange of gases (O2 & CO2) between the alveoli and blood occurs by simple diffusion.

Some pathological shunts can skip the pulmonary circulation.

Ideally, the ventilation-perfusion ratio (V/Q) should be 1. Physiologically, the apex of a lung is poorly perfused (decreased blood flow) and highly ventilated. The V/Q ratio is high and signifies that oxygen does not get a chance to properly diffuse from alveoli to blood. In contrast, the base of a lung is highly perfused (increased blood flow) and normally ventilated. The V/Q ratio is low and signifies that enough oxygen is not available to properly oxygenate the blood. 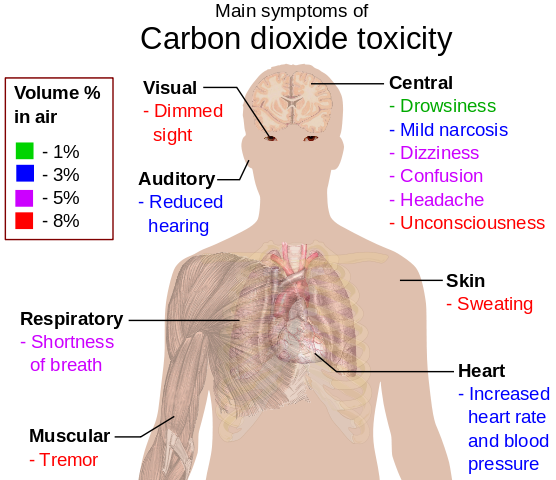 Leave a Reply to reem

One thought on “Respiratory Failure: Hypoxemia, Hypercapnia and Hypoxia”