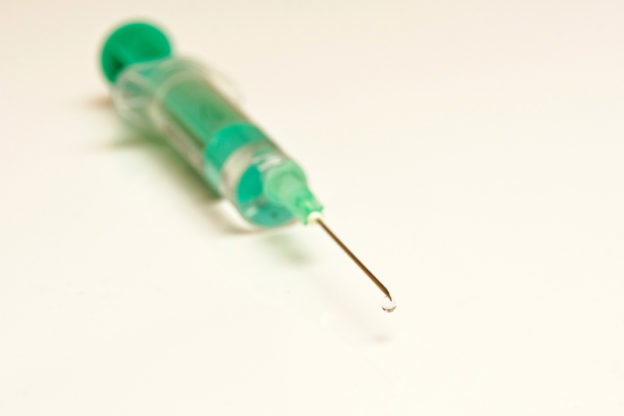 Hypothyroidism refers to a group of clinical manifestations due to a decreased amount of circulating free T3 and T4 hormones. The condition is caused by a pathology involving the thyroid or hypothalamic-pituitary axis.

The presence of increased TSH with decreased free serum T3 and T4 values indicates overt hypothyroidism. 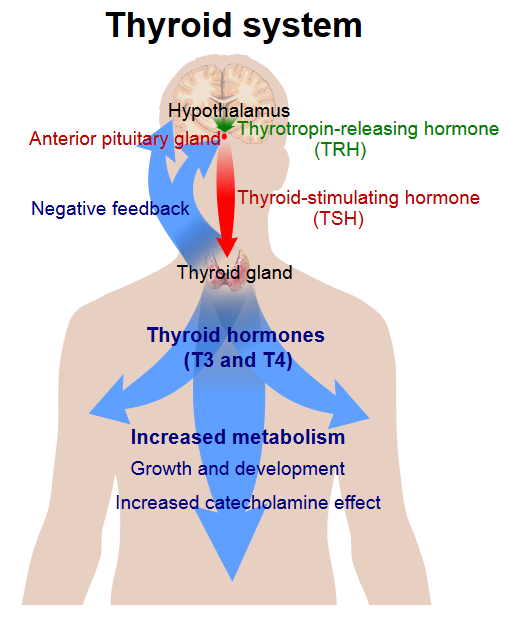 Hypothyroidism caused by iodine deficiency is more prevalent in less-developed countries. It usually affects females more than males and is common in elderly patients. Hypothyroidism is more common in Caucasians and Hispanics than in African Americans.

Etiology and Pathophysiology of Hypothyroidism

Clinical manifestations in hypothyroidism are primarily due to thyroxine deficiency. Symptoms usually are due to the decreased metabolic process and the accumulation of glycosaminoglycans. 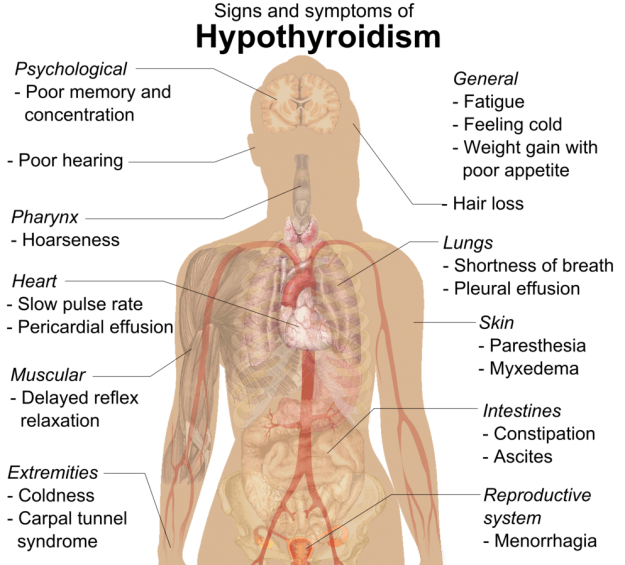 Decreased peripheral circulation is the reason for cool extremities. The epidermis shows atrophy and hyperkeratosis, resulting in the characteristically dry skin.

Cardiovascular manifestations also include lower exercise tolerance and exertional dyspnea. Hypothyroidism in patients with existing heart disease leads to the worsening of angina and heart failure.

Other abnormalities contributing to cardiovascular diseases that may occur in hypothyroidism patients are:

Hypothyroidism results in hyperproliferative anemia, which is normocytic and normochromic.

Constipation and decreased gastrointestinal motility are the most common symptoms of hypothyroidism.

The presentation of CTS usually involves the presence of tingling and numbness, which increase gradually during the night. Weakness and thenar muscle atrophy also occur. The first three fingers and half of the fourth finger show a predominant sensory loss. It is a reversible feature in hypothyroidism, and symptoms improve upon resolution of hypothyroidism.

Other non-specific symptoms observed are joint aches and muscle stiffness.

Sleep apnea is commonly seen in hypothyroidism, mostly because of macroglossia.

Laboratory Evaluation and Diagnosis of Hypothyroidism

TSH measurement is the primary starting point of evaluating hypothyroidism. Increased TSH needs to be confirmed by estimating free T4.

Primary hypothyroidism is diagnosed by the presence of:

If the TSH is decreased with a normal T3 and T4, it indicates subclinical hypothyroidism.

Therapy and Treatment of Hypothyroidism

The aims of the pharmacotherapy are:

Synthetic T4 is the treatment of choice for hypothyroidism. It is continued for a person’s lifetime unless the etiology is due to transient hypothyroidism or drug-induced hypothyroidism (amiodarone & lithium administration). Withdrawal of the precipitating drug is recommended under these conditions.

T4 is a prohormone. It is converted to T3 after deiodination in the peripheral tissues based on the metabolic requirements of the patient.

1.6 mcg/kg body weight is the required dosage in young and healthy patients. The starting dose of 25 mcg is preferred in the elderly and should be titrated gradually based on the response.

Symptomatic improvement usually occurs after two weeks, while TSH values take six weeks to establish a steady-state. Hence, TSH values should be measured after six weeks, and the dose should be adjusted.

It is characterized only by a biochemical alteration in the TSH value with no clinical symptoms. If the TSH value is less than 10 mIU/L, monitoring  TSH is advised every three months without treatment.

Treatment is required for the following presentations:

Subclinical hypothyroidism is treated by the administration of synthetic T4 (25 mcg).

It may present as goitrous and atrophic autoimmune thyroiditis. The pathogenesis involves high concentrations of antibodies to thyroid peroxidase and thyroglobulin. It usually has a higher prevalence in females.

The clinical course of Hashimoto’s disease involves a gradual loss of thyroid function. The initial presentation is subclinical hypothyroidism (TSH elevation with normal T4 and T3), which will eventually progress to overt hypothyroidism. Overt hypothyroidism usually persists throughout one’s lifetime, except in the case of children or pregnant women, who show only transient changes that will return to normal.

Inflammation in the earlier stages and follicular atrophy shows a gradual progression of follicular rupture. There is an increased release of the thyroid hormone into the circulation, leading to transient hyperthyroid symptoms.

Antibodies against the following thyroid antigens are associated with Hashimoto’s disease:

It is significant in the diagnosis of Hashimoto’s thyroiditis (chronic autoimmune thyroiditis). It is characterized by lymphocytes infiltrating the thyroid follicles, which gradually leads to thyroid failure and goiter formation. 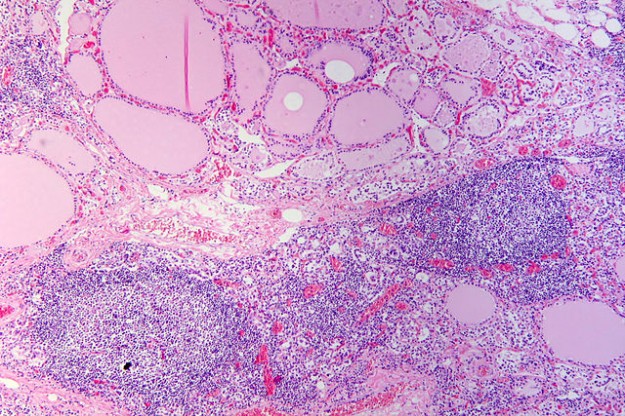 Amiodarone, a class III antiarrhythmic drug with two iodine atoms in its structure, can be administered to treat both hypothyroidism and hyperthyroidism. Amiodarone inhibits the entry and peripheral conversion of T4 to T3.

Effects of amiodarone on the thyroid gland include: 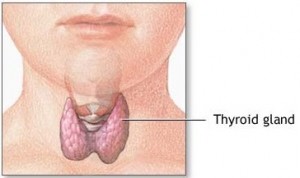 Mechanism: there is increased intrathyroidal content due to treatment with lithium. Increased iodine decreases the coupling of iodine in the formation of T4 and T3. There is no indication to discontinue lithium treatment due to hypothyroidism. Instead, hypothyroidism needs to be treated.

The most common cause of congenital hypothyroidism is thyroid dysgenesis. There are minimal clinical manifestations at birth due to the presence of maternal T4 which crossed the placenta.

Screening is performed by collecting a heel prick blood sample, typically two to five days after delivery. The sample is assayed for initial T4 levels, followed by a TSH assay if T4 values are below the 10th percentile. If the screening test is positive, retesting of serum TSH and T4 is conducted by collecting a blood sample by venipuncture.

Administer synthetic T4 with a dosage of 10—15 µg/kg per day.

Hypothyroidism due to central causes occurs when there is a primary pathology in the pituitary, hypothalamus, or hypothalamic-pituitary axis.

Pituitary adenomas are the most common cause of central hypothyroidism.

Clinical features are similar to primary hypothyroidism with coexisting excesses or deficiencies of other pituitary hormones.

Serum TSH may be low, normal, or even slightly elevated (up to about 10 mIU/L) in some patients because of reduced biological activity with normal immunoactivity (due to abnormal glycosylation of TSH subunits).

Administration of synthetic T4 (dose of 1.6µg/kg). Dose titration is based on monitoring serum-free T4 values and the patient’s symptoms.

Treatment of hypothyroidism via UpToDate

Clinical manifestations of hypothyroidism via UpToDate

Clinical features and detection of congenital hypothyroidism via UpToDate

Lithium and the thyroid via UpToDate