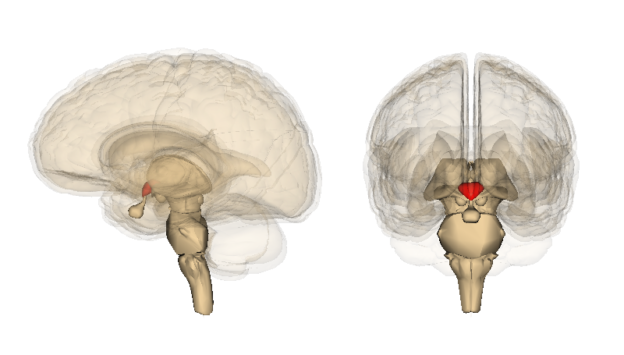 Through the release of glucocorticoids, the feedback control loop between the pituitary gland, hypothalamus, and adrenal cortex plays a central role in the reaction of the human body to stress. In this context, stress is primarily a nonspecific reaction to a large number of possible stressors such as injuries, cold, hunger, work, in addition to psychological triggers like social stress.

Research indicates that the body uses the same reaction pattern if people are exposed to high levels of stress in the work environment. Specifically, the level of glucocorticoids and catecholamines (e.g. adrenalin) in the blood are increased.

Stress is a reaction of the central nervous system (CNS) and is mostly mediated by the sympathetic nervous system and by the endocrine pathway via the hypothalamus, pituitary gland, and adrenal cortex. Thus, the endocrine pathway is very relevant for the physiological reaction to stress and interacts with other areas like the immune system and systems involved in electrolyte balance. 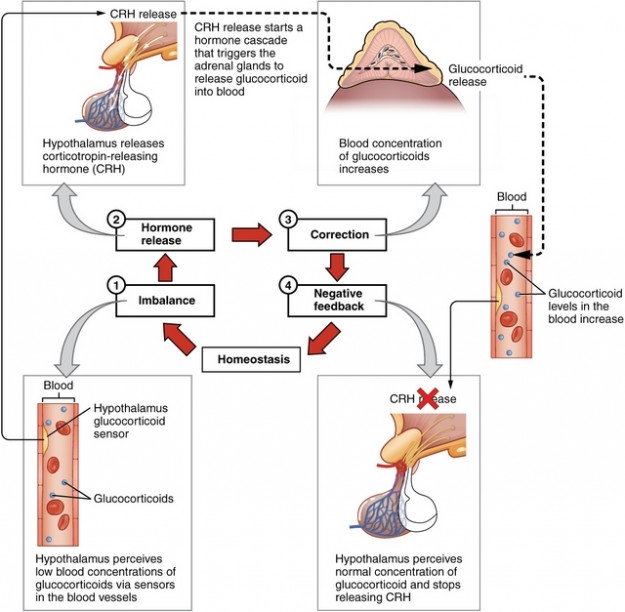 The hypothalamus-pituitary-adrenal axis (HPA) is, like most endocrine-regulated cycles, organized in 3 tiers.

The hypothalamus is the highest-level center and connects the nervous system with the endocrine system. The hormones released here and transported to the pituitary gland are called releasing hormones.

The posterior lobe of the pituitary gland secretes such non-tropic hormones, including oxytocin and antidiuretic hormone (ADH). Most non-tropic hormones originate from endocrine glands like the thyroid gland, adrenal cortex, or ovaries/testicles.

Role of the Hypothalamus 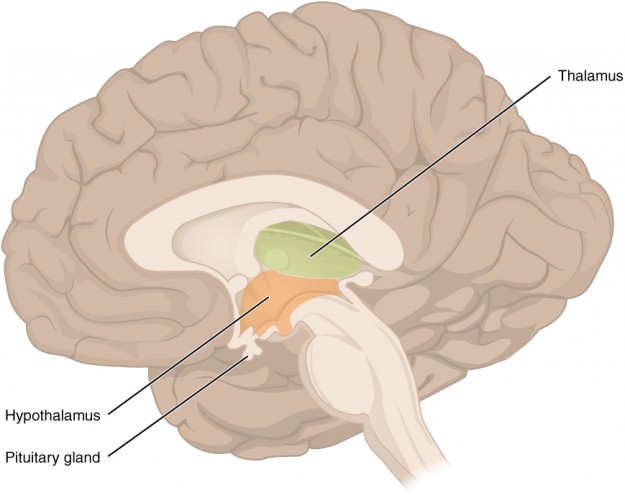 Image: The Diencephalon. By: Phil Schatz. License: CC BY 4.0

This response consists of a releasing hormone that is transported via the hypothalamic-hypophyseal portal venous system to the anterior pituitary gland and stimulates the synthesis and secretion of hypophyseal hormones. In the case of the HPA axis, the responsible hormone is a corticotropin-releasing hormone (CRH).

At rest, CRH secretion occurs in a pulsatile manner and follows a circadian rhythm, with the highest levels in the early morning and during stress.

Role of the Pituitary Gland

The latter determines the hyperpigmentation frequently observed in primary adrenal insufficiency (Addison’s disease) since more POMC peptides (and thus more MSH) are secreted during elevated ACTH production. The release of ACTH follows the pulsatile pattern of CRH, and an increase of cortisol in the blood occurs only a few minutes after the secretion of ACTH.

Role of the Adrenal Cortex

Image: The adrenal glands. By: Phil Schatz. License: CC BY 4.0

The adrenal gland is a paired organ that is purely endocrine. It lies within the kidney capsule and directly abuts the kidney. While the adrenal medulla is regulated by the sympathetic nervous system and is responsible for the release of catecholamines into the blood, the steroid hormones are produced in the adrenal cortex.

Concerning their biosynthesis, steroid hormones originate from cholesterol and pass through similar steps of synthesis. Histologically, the adrenal cortex has 3 different layers that mirror the locations of production of different steroid hormones:

Note: To remember the layers, the following mnemonics could be helpful. For the histological layers from outside to inside: G – F – R (corresponding to glomerular filtration rate; this should be familiar within the context of the kidneys) and for the respective steroid hormones from outside to inside: Salt – Sugar – Sex (corresponding to the function of the respective hormones). 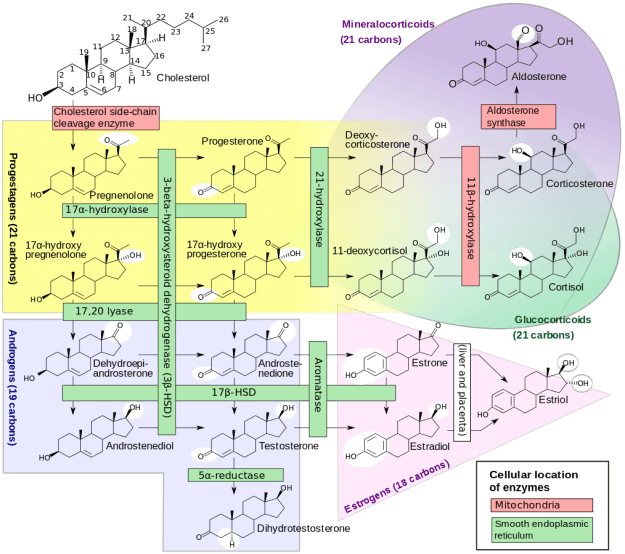 Cortisol is the final non-tropic hormone and is produced in the ACTH-dependent zona fasciculata of the adrenal cortex. Apart from its effect on cortisol biosynthesis, ACTH also allows for the sufficient provision of NADPH, an important cofactor of glucocorticoid synthesis, and for the increased activity of an esterase which provides cholesterol, which is the substrate for steroid hormone biosynthesis.

The synthesis of cortisol begins in the mitochondrion, with the hydroxylation of cholesterol to pregnenolone. This is the rate-limiting step of cortisol synthesis, and it is mediated by the enzyme desmolase. Subsequent reaction steps take place in the cytosol. Eventually, a steroid hormone with 21 C atoms is formed with a characteristic OH-group at the C11 atom.

Note: Since the syntheses of the different steroid hormones are very similar, you should remember them using an overview of all reaction steps.

Cortisol and its Function 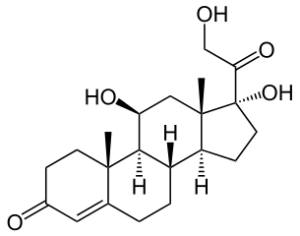 Cortisol (also: hydrocortisone) is a steroid hormone and one of the most important representatives of the glucocorticoids. Like all steroid hormones, cortisol is formed from the scaffold of cholesterol. It is produced in the adrenal cortex, which is responsible for the synthesis of steroid hormones. Other glucocorticoids are cortisone and corticosterone, as well as synthetic compounds, which are used medically.

The effects of cortisol are numerous. Apart from its effect on sugar, amino acid, and lipid metabolism, it especially has an influence on the immune system and its anti-inflammatory components. As a steroid hormone, cortisol is lipophilic and binds to an intracellular receptor. In the blood, it is transported by binding to a protein called transcortin.

When cortisone reaches the target cell as a non-tropic hormone, it exerts its effect via the regulation of gene expression on the level of transcription. Thus, its effect is long-lasting. Cortisone does not bind to a membranous G-protein coupled receptor but to a glucocorticoid receptor in the cytosol, which acts as a transcription factor when activated.

Concerning metabolism, cortisone mostly has catabolic effects in the periphery, while centrally, i.e. in the liver, its effects are mostly anabolic. While proteolysis is induced in muscle cells and lipolysis is promoted in fat tissue, the increased gene expression of enzymes of gluconeogenesis and glycogen synthesis can be observed in the liver.

Glucose intake in the muscles is decreased. Consequently, the blood sugar level rises, which ensures good supply to the CNS. Due to the decreased glucose intake and utilization in the periphery and increased glycogen synthesis, cortisone can be classified as an antagonist to insulin since it has similar effects to glucagon.

Additionally, cortisol has an anti-inflammatory effect. This is due to the inhibition of 1) lymphocyte proliferation, 2) synthesis of interleukins, and 3) inhibition of cyclooxygenase-2 (COX-2).

Concerning its influence on other organ systems, cortisol has growth-slowing effects on the bones and even causes osteoporosis. It also promotes alertness in the CNS and can increase the contractile force of the heart via an increase in the effect of catecholamines.

Note: In the majority of cases, the anti-inflammatory effect of cortisol is the cause of the therapeutic application of glucocorticoids. Synthetic steroid substances include prednisolone or dexamethasone.

Every day, the body produces roughly 12–30 mg of cortisol, which has a half-life period of approx. 90 minutes and is then inactivated in the liver. Glucocorticoids given for treatment lose a part of their effect at first contact with the liver, which is called the ‘first-pass effect’. The metabolites are then excreted via the liver or kidneys.

A single measurement of the cortisol level is not very meaningful since it follows a physiological circadian rhythm. The maximum plasma concentration of cortisol, with peak values of 25 µg/dL, is reached early in the morning about half an hour after waking up (cortisol awakening response). During the course of the day, the level drops.

Regulation of the Hypothalamus-Pituitary-Adrenal Axis

Several mechanisms ensure an appropriate response of the HPA axis and prevent the excessive release of cortisol with its negative consequences for the body.

The most important of these mechanisms is the negative feedback. This mechanism is often observed in endocrinology and describes the inhibitory effect of a hormone on the production of a releasing factor, which eventually inhibits its own synthesis.

In the case of the glucocorticoid cascade, the increased release of cortisol has an inhibitory effect on the hypothalamus and pituitary gland. Thus, less CRH and ACTH is secreted and the biosynthesis of cortisol is reduced. As long as all involved organs function properly, the plasma levels of cortisol always remain within acceptable limits. 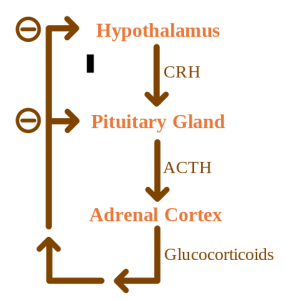 Image: Diagram of the physiologic negative feedback loop for glucocorticoids. By: DRosenbach. License: CC BY 3.0

On the other hand, there are activators of glucocorticoid synthesis that cause an increased synthesis independent of the stress reaction or the physiological circadian activity. Catecholamines are an example of this because they stimulate the secretion of ACTH. Moreover, mediators of the immune system like IL-1 and TNF-α have a stimulating effect.

Diseases of the Hypothalamus-Pituitary-Adrenal Axis

An excessive cortisol level is referred to as Cushing syndrome. The causes of this syndrome are complex. However, in the majority of cases, it is the consequence of immunosuppressive therapy with glucocorticoids (iatrogenic Cushing syndrome). Thus, there is a maximal dose (Cushing threshold) in the therapy guidelines which should not be exceeded if possible.

Another frequent cause is a tumor in the anterior lobe of the pituitary gland, which secretes ACTH and causes abnormally increased plasma levels of cortisol. This central Cushing syndrome is also referred to as Cushing disease. 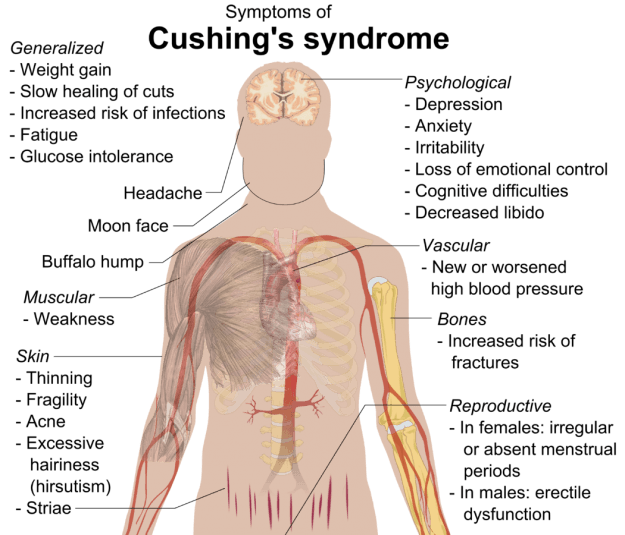 The symptoms of such increased glucocorticoid levels are characteristic of this disease. The elevated blood sugar of the patients can be explained by the effect of the hormone and can lead to diabetes mellitus type II. Other consequences are osteoporotic changes and muscle weakness due to proteolysis.

Concerning the outward appearance, patients often display distinct central obesity (buffalo hump) and a moon face. Edema and high blood pressure are part of the clinical picture since glucocorticoids bind to the mineralocorticoid receptor if the concentration is high enough.

Therapy (see diagnostic investigation for hypercortisolism) often aims to treat the cause of the Cushing syndrome. In the case of iatrogenic Cushing syndrome, glucocorticoid level reduction should be attempted. Adenomas of the pituitary gland are removed surgically or irradiated with varying results.

Hypocortisolism (insufficiency of the adrenal cortex)

Primary insufficiency (Addison’s disease) of the adrenal cortex is the most frequent form. Although this disease has several causes, in roughly 70% of cases, an autoimmune disease with antibodies against the cells of the adrenal gland is the underlying cause. Tumors and infections are also possible causes. 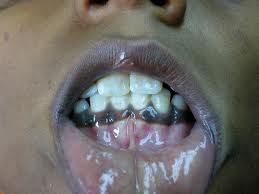 Acute and fulminant manifestation with possible circulatory shock, which is frequently associated with triggering factors like disease or stress, is called an Addisonian crisis and is an endocrinological emergency.

Note: Another cause of Addison’s disease is long-term cortisol therapy, which leads to a decrease in ACTH and consequent atrophy of the zona fasciculata.

Hyperpigmentation is typical in Addison’s disease since more MSH is produced due to increased levels of ACTH as a consequence of absent cortisol feedback. Thus, Addison’s disease is sometimes referred to as ‘bronze disease’.

Diagnostically, the primary form can be distinguished from the other forms with ACTH diagnostics and the detection of autoantibodies. Therapy is performed with continuous substitution of glucocorticoids and mineralocorticoids.

Gillich, A. (1994). The role of histamine in the hypothalamic – pituitary – adrenal axis.