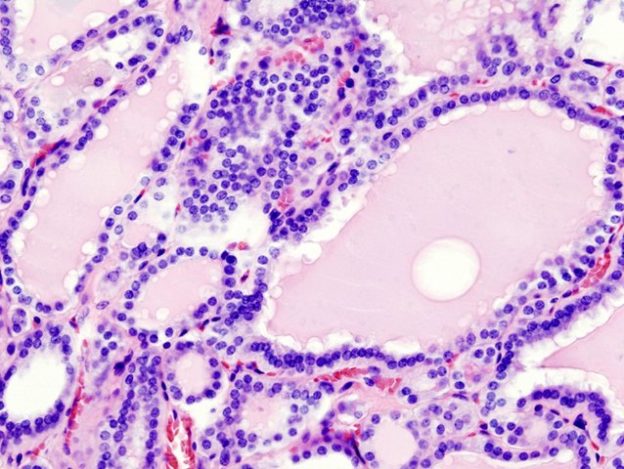 Thyroid storm is a rare, acute life-threatening emergency with high mortality. It is the extreme form of thyrotoxicosis characterized by fever, atrial fibrillation, agitation, confusion, delirium, and even coma. It is most commonly precipitated by infection, thyroid surgery or trauma.

Subclinical hyperthyroidism is an asymptomatic condition in which serum TSH is decreased, but serum free-T3 and free-T4 levels are within a normal range. Although these patients are clinically asymptomatic, they have an increased risk of developing thyrotoxicosis in subsequent years.

Goiter is simply the abnormal enlargement of the thyroid gland. It does not give signs about the thyroid functioning. A goiter can occur in hypothyroidism, hyperthyroidism or euthyroidism. 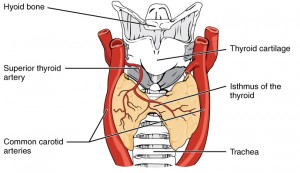 Image: “The human thyroid as viewed from the front, with arteries visible” by CFCF. License: CC BY-SA 3.0

All the thyroid disorders are more common in females. Graves’ disease is the most common cause of hyperthyroidism, accounting for 60 – 80 % of the cases. It is eight times more common in females than males and often occurs in young females, around 20 – 40 years of age. Its annual incidence is approximately 0.5 cases per 1000 individuals. The toxic multi-nodular goiter comes second with around 15 % of the hyperthyroidism cases.

Etiology and Pathophysiology of Hyperthyroidism