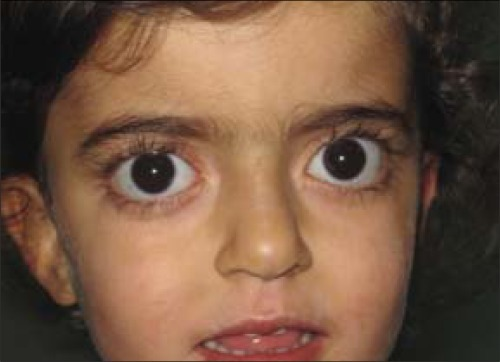 Image: “Photograph of the patient showing exophthalmia. Graves disease with exophtalmia in a two-year old child.” by Yalçın H, Akçora B, Balcı A – Mol Imaging Radionucl Ther (2011). Licence: CC BY 2.5

Hyperthyroidism can be defined as the overactivity of the thyroid gland which is associated with increased release and/or production of thyroid hormones and accelerated peripheral metabolism.

Thyrotoxicosis is a specific disorder of thyroid hormone overactivity that is characterized by an increased amount of unbound thyroid hormones which can be endogenous or exogenous. Most cases of hyperthyroidism in children are caused by Graves’ disease, but the condition is rare.

Epidemiology of Hyperthyroidism in Children

The concordance in monozygotic twins for Graves’ disease is around 50 %. Because of this, most scholars agree that Graves’ disease is a condition that is caused by a complex interplay between genetic predisposition and unknown environmental exposures.

Graves’ disease is more common in girls compared to boys, with a female to male ratio of 3-6:1 reported in studies. However, other causes of hyperthyroidism have no male to female variation.

Etiology of Hyperthyroidism in Children

The causes of hyperthyroidism in the pediatric population are classified into:

A. Thyroid causes of hyperthyroidism:

This happens among patients with previous history of hypothyroidism who are being treated with thyroid hormone replacement therapy. Adolescents are the most likely to develop hyperthyroidism due to exogenous thyroid hormone intake.

The exact etiology of Graves’ disease is unknown, but an autoimmune pathology is most likely.

Graves’ disease is characterized by the overstimulation of the thyroid gland by thyroid-stimulating immunoglobulins (TSIs). The exact trigger for the formation of TSIs is unknown, but environmental exposures along with genetic predisposition are the most likely mechanism.

These antibodies bind and activate the thyroid-stimulating hormone (TSH) receptor, which leads to follicular growth and release of thyroid hormones that exert peripheral effects.

Hyperthyroidism symptoms are the consequence of the activation of transcription of certain cellular proteins that increase the basal metabolic rate. This is associated with a response that is like the one caused by catecholamines’ excess, and adrenergic receptors blockage is known to improve the symptoms of such patients.

Graves ophthalmopathy presented as lid retraction and lid lag is caused by the sympathomimetic effects of the thyrotoxicosis autoimmune reaction and the resulting accumulation of inflammatory infiltrate in the periorbital space.

The increased production and release of the thyroid hormones can be caused by any of the previously mentioned etiologies and the endpoint and pathophysiology are the same regardless of the etiology. 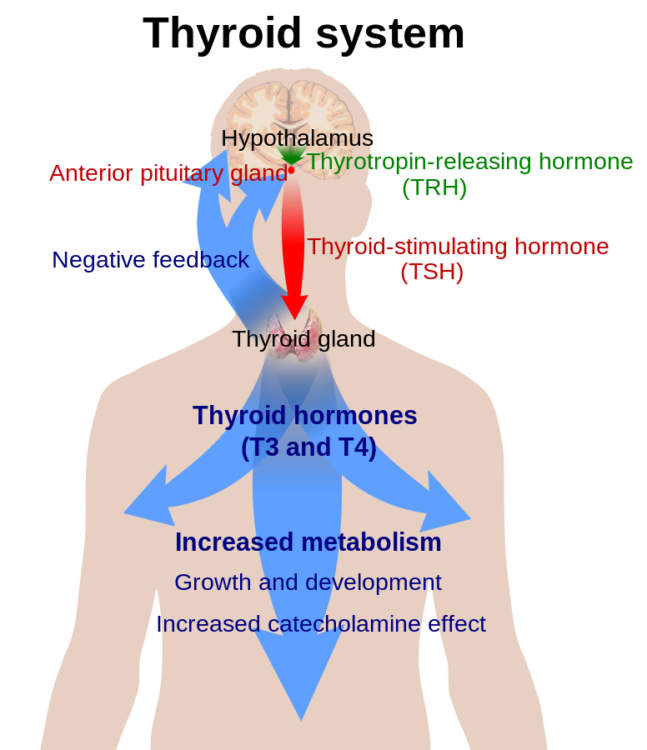 Overview of the thyroid system

Clinical Presentation of Hyperthyroidism in Children

Adolescent females with hyperthyroidism might complain of menstrual irregularities or amenorrhea. Hair loss can be also seen in patients with Graves’ disease.

Tachycardia and wide pulse pressure are present in most patients with hyperthyroidism, including children. Signs suggestive of congestive heart failure are rarely seen in children. Systemic hypertension might be seen in some children with Graves’ disease.

Diagnostic Workup for Hyperthyroidism in Children

When measuring T4 levels, it is important to measure total T4 and free T4 hormone. This is important for differentiation between patients with true hyperthyroidism and those with elevated levels of total T4 but normal free T4 levels. 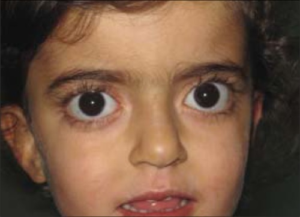 Image: “Photograph of a patient showing exophthalmia. Graves disease with exophtalmia in a two-year old child.” by Yalçın H, Akçora B, Balcı A – Mol Imaging Radionucl Ther (2011). Licence: CC BY 2.5

The diagnosis of Graves’ disease is based on the findings obtained from the physical examination and thyroid function tests. The measurement of TSI levels is rarely needed but is available for clinical practice. An elevated TSI level in a hyperthyroid patient has a sensitivity of 95 % and a specificity of 96 % for Graves’ disease.

Patients with chronic lymphocytic thyroiditis might have hyperthyroidism in the acute stage. During the hyperthyroid stage, elevated levels of anti-thyroglobulin and anti-thyroid peroxidase antibodies are seen. TSI levels are usually normal.

Nuclear imaging is rarely performed in children with Graves’ disease as the condition can be diagnosed clinically and biochemically. 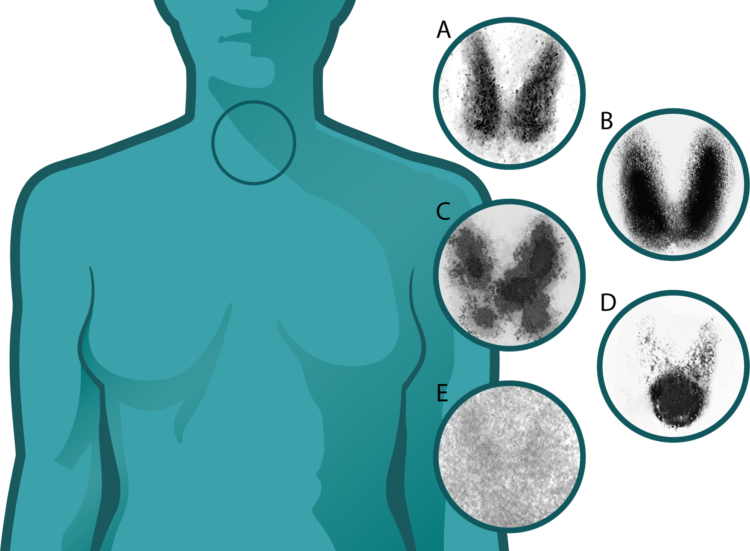 Treatment of Hyperthyroidism in Children

Prognosis and complications of hyperthyroidism