The most common types of Hypersensitivity pneumonitis in the United States are farmer’s lung, bird fancier’s lung, and Chemical worker’s lung.

It’s one of the most common forms of Hypersensitivity pneumonitis, where inhalation of proteins, such as thermophilic bacteria in moldy hay are commonly responsible for the development of HP.

Exposure to excreta and proteinaceous material on dust from pigeons and other birds may induce Hypersensitivity pneumonitis.

Different organic chemicals, such as isocyanates may induce immune-mediated disease.

Some causes of Hypersensitivity pneumonitis

Two mechanisms have been demonstrated in the pathogenesis of hypersensitivity pneumonitis after inhalation of an allergic antigen:

The early stage of the disease is characterized by polymorphonuclear leukocytes infiltration in the alveoli and bronchioles, followed by infiltration of T-lymphocytes and macrophages leading to formation of non-caseating granulomas as a result of delayed cell-mediated hypersensitivity reaction. Antibodies are formed against the allergic antigen followed by immune-complex deposition causing inflammation of the alveoli and small airways (bronchioles) through activation of complement via the classical pathway. 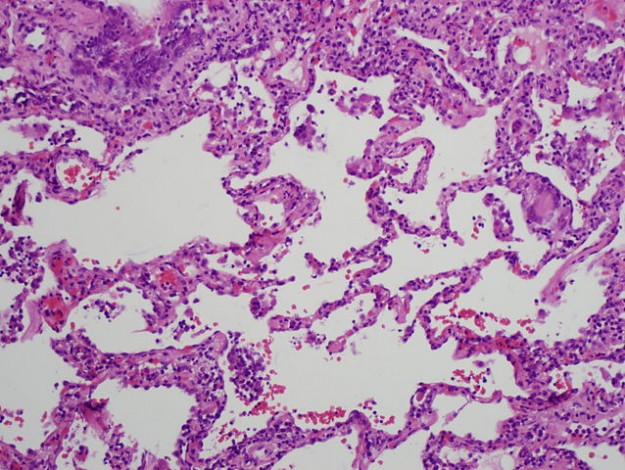 Image: “Low magnification view of the histology of chronic hypersensitivity pneumonitis. The interstitium is expanded by a chronic inflammatory infiltrate. Two multi-nucleated giant cells can be seen within the interstitium on the left, and a plug of organizing pneumonia at the bottom left”, by Multeysmith. License: CC BY-SA 3.0

Symptoms
The patient presents with an abrupt onset of a cough, fever, chills, malaise, and dyspnea without wheezes, usually 6 to 8 h after inhalation of the eliciting antigen, and resolves within days if no further exposure occurs. The patient can be misdiagnosed as having a viral or bacterial infection and is frequently treated with antibiotics.

Subacute hypersensitivity pneumonitis may occur after an acute presentation of the disease due to repeated and continued exposure to the eliciting antigen.

The patient usually presents with an insidious onset of a cough and dyspnea that may progress to cyanosis requiring hospitalization. The symptoms develop gradually over a period of weeks. Progression of the disease into the chronic form may occur.

Repeated and continuous low exposure to the antigenic agent over a long period can lead to the chronic form of the disease. The patient may lack a history of acute or subacute manifestations. At this stage, avoiding exposure to the eliciting agent usually results in only partial resolution of symptoms, and the patient usually requires prednisone therapy.

Pulmonary function tests may reverse to normal in acute and subacute forms if there is no further exposure to the eliciting agent.

In acute and sub-acute forms:

It may appear as diffuse “ground-glass” infiltrates, confluent alveolar opacification.

Diffuse changes may appear as parenchymal micronodules and interstitial fibrosis, accompanied by honeycombing and/or emphysema. 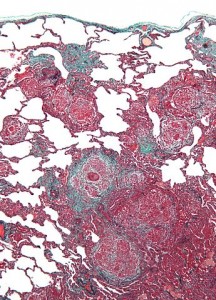 A lung biopsy obtained through flexible bronchoscopy, open-lung procedures, or thoracoscopy may be used for diagnosis.

The histopathology differs according to the form of the disease. Although the findings are distinctive, they may not be pathognomonic of hypersensitivity pneumonitis.

The histopathologic findings in HP include:

There are several clinical syndromes that mimic hypersensitivity pneumonitis, and it is important to recognize and differentiate them since they are also induced by inhalation of organic agents.

There are both environmental and host factors involved in the development of hypersensitivity pneumonitis. Management of the disease is based mainly on modification of the environment since the pathogenesis of the disease is not completely understood to help modify the host’s response.

The source of exposure (birds, humidifiers, molds) can be removed. Purifying the air inhaled through pollen masks, airstream helmets and supplying fresh air can decrease the risk of exposure. It’s advisable to avoid contact with the eliciting agent completely if the patient has chronic hypersensitivity pneumonitis since lung fibrosis may already be partially or completely irreversible.

It’s not recommendable to give glucocorticoids to a patient with acute hypersensitivity pneumonitis because the acute form usually recovers with antigen avoidance and without the need for glucocorticoids.

Patient with subacute HP present with severe respiratory distress and cyanosis that may progress into frank respiratory failure despite hospitalization. Therefore, immediate diagnosis and administration of glucocorticoids are indicated for this patient. Prednisone 1 mg/kg/day continued for 7 to 14 days has been shown to accelerate recovery, but doesn’t affect the long-term prognosis.

A patient with chronic form hypersensitivity pneumonitis usually benefits from environmental control without the need for glucocorticoids because the lungs have already been damaged from repeated exposure to the allergic agent.

A trial of glucocorticoids can be given to obtain maximal reversibility of the lung disease.

Eosinophilic pneumonia involves a large group of diseases that are classified according to the etiology into either disease with known or unknown etiologies.

This syndrome consists of acute eosinophilic pneumonia of unknown cause characterized by migrating pulmonary infiltrates and minimal clinical features.

It’s an idiopathic acute febrile illness that occurs in a span of less than seven days characterized by severe hypoxemia; pulmonary infiltrates, and no history of asthma.

It is a vasculitis disorder that affects different body organs. It frequently involves the skin, kidney and central nervous system in addition to the lungs. Any age can be affected by the disease, especially patients with bronchial asthma.

A patient with Chrug-Strauss typically presents with pulmonary infiltrates, chronic bronchial asthma, vasculitis, and eosinophilia. The disease is progressive, but it responds well to glucocorticoids which may regress the progression of the disease.

This syndrome is characterized by the presence of over 1500 eosinophils per microliter of peripheral blood over a period of six months or longer, and the absence of parasitic, allergic, or other known causes of eosinophilia. The heart can be affected by tricuspid valve abnormalities or endomyocardial fibrosis and restrictive cardiomyopathy.

Other organs may also be involved including the liver, spleen, skin and central nervous system. Corticosteroids are the treatment of choice.

Allergic bronchopulmonary mycosis should be suspected if a patient with eosinophilic pneumonia has bronchial asthma and wheal-and-flare skin reaction due to Aspergillus or other fungal antigens. A. fumigatus is the most common cause.

This disease should be distinguished from Churg-Strauss Syndrome, which is also associated with bronchial asthma.

Suspect parasitic-induced eosinophilia in patients with a recent travel history.

These are the most common cause of eosinophilic pulmonary infiltrates in the United States (US). It can be treated simply by withdrawing the drug and the use of glucocorticoids.