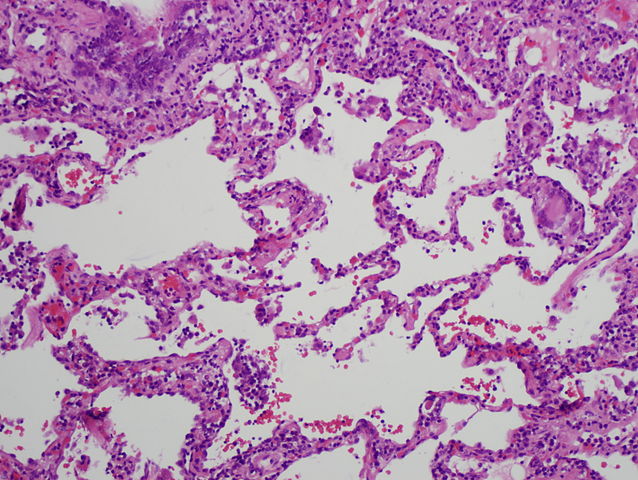 Image: “Low magnification view of the histology of chronic hypersensitivity pneumonitis. The interstitium is expanded by a chronic inflammatory infiltrate. Two multinucleated giant cells can be seen within the interstitium at left, and a plug of organizing pneumonia at bottom left”, by Multeysmith. License: CC BY-SA 3.0

We respond to foreign objects and substance that intrude our bodies in different ways. Essentially these are categorized into either innate or adaptive immunity. 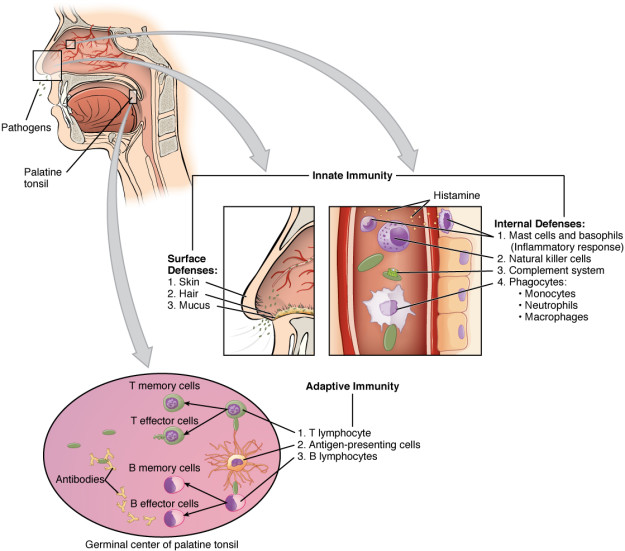 Image: “Cooperation between Innate and Adaptive Immune Responses” by PhilSchatz. License: CC BY 4.0

This type of immunity is always present in our system. It is composed of the following:

The epithelial cells lining the skin, gastrointestinal tract and respiratory airways. They produce natural antimicrobial substances and serve as a mechanical barrier to environmental pathogens.

Monocytes, neutrophils, dendritic cells, natural killer cells, mast cells, and other cells. They trigger a series of immune reactions that ultimately lead to the destruction or neutralization of the pathogens. These work by engulfing the pathogen, releasing cytotoxic substances or by presenting the pathogens to more efficient systems for immunity. These cells may also release substances or cytokines that serve as communicators to the rest of the immune system.

The proteins of the complement system are activated by microbes. Their activation leads to the ease of phagocytosis and neutralization of the pathogen by the cells involved in the immune response.

The innate immune response is known to be responsible for two reactions. The first of which is inflammation. As mentioned above, the cytokines, other proteins produced by the complement system and the activated cellular components in this category could set off a series of reactions that could lead to inflammation. To some degree, this response is healthy. However, problems could arise if this becomes exaggerated.

Another feature involved with innate immunity is its ability to defend the body from viral intruders. Along with the other signals produced by the innate immunity that keep the immune system going; the body could go into an antiviral state once type I interferons  (IFNs) are produced by virally stimulated immune cells.

The adaptive immunity uses a more complex set of receptors in order for it to identify a wide range of microbes that could cause diseases in the body. The main components in this category include lymphocytes and antibodies. This category is further divided into two types: humoral immunity and cell-mediated immunity.

The humoral immunity is kept working by antibodies that are produced by B lymphocytes. These highly specific proteins attach themselves to target microorganisms and mediate their neutralization, elimination or presentation to more efficient effector mechanisms.

The adaptive immunity, having a diversity of responses involved for its function, may be involved in quite a lot of problems when it comes to tissue injury and diseases. As much as it can protect the body from harmful pathogens, it can also be implicated in situations where there is an exaggerated response leading to tissue damage. These conditions are collectively called as hypersensitivity reactions.

Hypersensitivity reactions can be caused by a variety of reasons. For one, our own immune system could react with the functioning cells within our body. Under normal circumstances, the immune system employs a screening process wherein self-detecting immune cells are eliminated from the circulation. However, in some people, this mechanism can be absent.

Hypersensitivity can also be activated in the actual presence of a microbe. In this situation, there is an exaggeration in the efforts to neutralize the microorganism. This can lead to the destruction of the cells, tissues, and structures adjacent to the area of invasion. This mechanism is most pronounced when the microorganism is very persistent.

Environmental antigens may also play a part in tissue destruction caused by the immune reaction. In select people, a certain antibody (immunoglobulin E or IgE) is produced in the presence of an allergen coming from the environment, leading to the development of an allergic reaction. 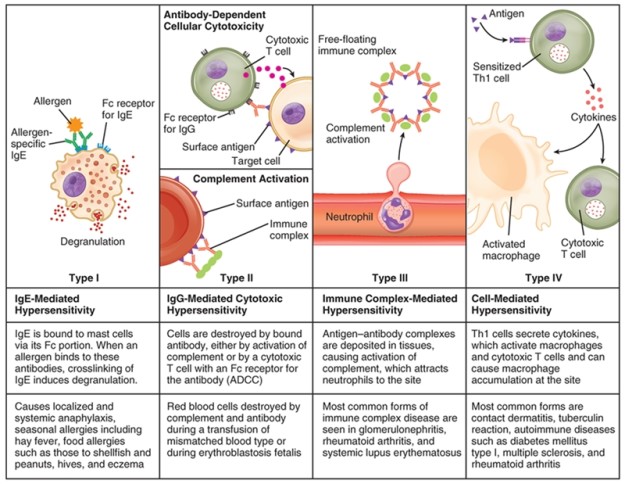 This subclass is characterized by the reaction between IgE bound to mast cells and allergens, otherwise known as an allergy. This is mediated by a specific type of T lymphocytes called TH2 that is essential in the production of IgE, eventually leading to inflammation. The activation of TH2 leads to the production of certain cytokines that are potent in mediating an additional response from other immune components. To name a few including interleukins.

IL-4: aside from the formation and activation of additional TH2 cells, IL-14 is also responsible for the antibodies produced by B cells to switch into becoming IgE.

IL-5: this is the interleukin behind the activation of eosinophils, a granulocyte that is a potent effector cell for type I reactions.

IL-13: IL-13 promotes the production of more IgE and could also act on some epithelial cells causing them to secrete mucus. 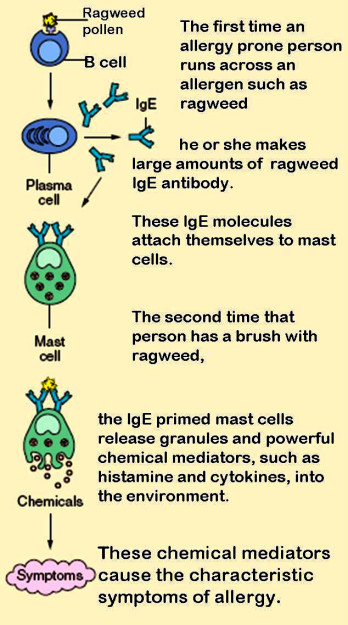 Image: “Mast cells are involved in allergy. Allergies such as pollen allergy are related to the antibody known as IgE. Like other antibodies, each IgE antibody is specific; one acts against oak pollen, another against ragweed.” by US Federal Government. License: Public Domain

When activated circulating effector cells, such as mast cells, come into contact with the same allergen. This can cause them to go haywire by releasing a lot of mediators that can cause inflammation and tissue damage. These include preformed mediators (vasoactive amines, enzymes, and proteoglycans), lipid-derived mediators (leukotrienes, prostaglandin D2 and platelet-activating factor) and other cytokines.

During the late-phase of an immediate hypersensitivity response, the reactions that led to the activation of effector cells and the production of potent mediators are sustained. This is made possible as additional cells of the immune system are recruited despite the already eliminated allergen. Eosinophils are usually the ones present in these cases.

In some cases, what causes inflammation and cellular destruction are antibodies. This reaction can be brought about by antibodies that bind to self-antigens (autoantibodies) or from exogenous antigens that have the tendency for exaggerated reactions.

Antibodies, particularly immunoglobulin G and M (IgG and IgM), are present on the surface of some cells and in the extracellular matrix. These proteins also contain receptors that bind to specific antigens. Once bound, a number of chain reactions ensue, ultimately leading to cell death and inflammation.

In a process called opsonization, the bound antibodies, now called an antigen-antibody complex, make the microbe more visible for phagocytosis by macrophages and neutrophils. This is made possible as the complexes release cytokines leading to the activation of the complement system, a series of reactions that produce complement substances. These substances act as a potent mediator for further immune reactions to continue. Additionally, these act as a cytotoxic agent. 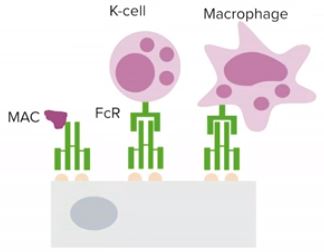 These complexes could deposit in various tissues and extracellular matrices in the body. This becomes a problem as the complement substances produced by these complexes could attract cells and mediators involved in the inflammatory process. This phenomenon is quite evident in the following cases:

Type III hypersensitivity reactions are primarily characterized as reactions involving the deposition of immune complexes in various locations in the body. These depositions are most prominent in areas that require high blood flow for the formation of other body fluids such as urine and synovial fluid. Examples of locations prone for deposition are:

Just like the 2nd type of hypersensitivity, type III hypersensitivity starts off as exogenous (foreign antigens) or endogenous (autoantigens) antigens activate antibodies secreted by B lymphocytes. Antibodies, particularly IgG and IgM bind to the offending agent in the circulation. However, in the aforementioned locations where relatively higher blood flow is needed for the production of other fluids, these complexes tend to plant themselves and wreak havoc on those areas. Once deposited, the complement cascade will be triggered and will then produce substances that are both locally and systemically active.

Immune complex-mediated hypersensitivity reaction is very evident in cases where sera coming from different organisms or species (e.g. anti-tetanus immunoglobulin from horse serum) is injected into human beings (e.g. when a child punctured by a nail). This is commonly called acute serum sickness. Although very rare, this case serves as a model in explaining what goes on during a type III reaction.

Another case that exemplifies this type of reaction is the Arthus phenomenon. This occurs when a locally injected antigen causes a localized reaction that is seen as necrosis of the overlying tissues. This is due to the deposition of complexes on the vascular structures found in that area.

As the name implies, type IV hypersensitivity reactions are characterized by a rather delayed response mediated by either helper or cytotoxic T cells. In most cases, it is usually the helper T cells that are implicated in most cases of hypersensitivity.

This specific subclass of T lymphocytes does not directly attack pathogens. Instead, it produces interleukins and other cytokines that promote the proliferation of other immunologically active cells. In type IV hypersensitivity, the particular type of helper T cells implicated are TH1 and TH17.

Helper T cells are activated when cells that present antigens such as dendritic cells and macrophages produce certain cytokines. These cytokines induce the proliferation of either TH1 or TH17. Once produced, these effector cells enter the circulation where they serve as guards that work long term in fending off potential pathogens.

The effects of this type of mechanism are delayed because it usually takes hours to days for the damaged interleukins to accumulate in the circulation. The interleukins produced attract cells such as neutrophils and macrophages that can phagocytose or damage the area where there are pathogens. Examples of cases where Helper T cell-mediated hypersensitivity is apparent include the following:

Unlike helper T cells, cytotoxic T cells directly kill the cells that carry the triggering antigen. For this reason, this particular subtype is highly effective against viral and parasitic infections in which the offending agent is found intracellularly.

These cells do damage by releasing molecules and complexes that damage the microbe. Unfortunately, these substances are not selective only to offending agents and can be detrimental to surrounding healthy tissues. Cases where there is a cytotoxic T lymphocyte-mediated hypersensitivity are the following: