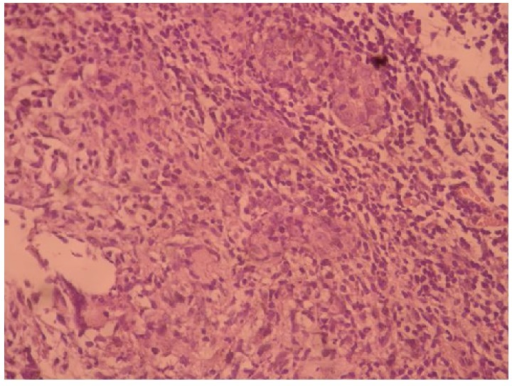 Increased levels of prolactin inhibit gonadotropin-releasing hormone (GnRH), which is synthesized in the hypothalamus, resulting in a decrease in the levels of luteinizing hormone (LH) and follicle-stimulating hormone (FSH). This, in turn, decreases estrogen levels, leading to the cessation of ovulation and menstruation. This is why women do not menstruate during lactation.

Prolactin is responsible for the production of breast milk. The primary function of prolactin is to stimulate and maintain lactation in the postpartum period. It promotes the growth and development of the mammary glands during pregnancy and prepares the breasts to produce milk. It also causes a decrease in sexual drive and reproductive function.

The secretion of prolactin is episodic, and levels vary with age and during the menstrual cycle. Levels increase after sleep and meals. Physiologically, exercise, pregnancy, and stress also cause an increase in prolactin secretion.

Prolactin is secreted from the anterior pituitary gland under the direct influence of several hormones that stimulate its secretion (e.g., thyrotropin-releasing hormone, vasoactive intestinal peptide) and dopamine antagonists. Similarly, dopamine tonically inhibits the secretion of prolactin via D2 receptors located on the lactotrophs. Normal values of prolactin range from 0 to 20 ng/mL, based on the laboratory reference value and other factors that influence secretion.

When released into the circulation, prolactin exerts its effects by stimulating breast epithelial cells, thus inducing and maintaining milk production. Estrogen promotes the proliferation of pituitary lactotrophs, thus aiding prolactin secretion. However, estrogen actually inhibits lactation, so there is an increase in breast mass with inhibited lactation during pregnancy when estrogen levels are high. In the postpartum period, there is a rapid decline of estrogen, and lactation begins because prolactin is no longer opposed. This situation is known as puerperal hyperprolactinemia.

Nonpuerperal hyperprolactinemia results from pituitary lactotroph adenomas or any pathology along the hypothalamic-pituitary dopaminergic pathways that produce prolactin.

Hyperprolactinemia has diverse causes, which can be divided into the following categories.

The most common physiologic cause of increased serum prolactin levels is pregnancy. A normal pituitary gland grows in size during pregnancy because of estrogen-induced hypertrophy and hyperplasia of the lactotrophs. This eventually leads to a progressive increase in prolactin production and its hypersecretion during pregnancy.

The placenta produces estrogen, which, in turn, stimulates mitosis of the lactotrophs, leading to an increase in serum prolactin, which peaks at the end of pregnancy. The levels decline rapidly after birth but remain at a slightly increased level in lactating women for many months.

In infants, prolactin levels are increased approximately 10-fold after birth because of the stimulatory effect of maternal estrogen. The neonatal levels then gradually decrease to nor­mal by approximately 3 months of age. Other physiologic causes include the following:

Hyperprolactinemia can occur because of primary hypothyroidism due to high thyrotropin-releasing hormone (TRH) levels. This, in turn, stimulates prolactin release and reduces prolactin metabolic clearance.

Other systemic causes include the following:

The most important drugs that cause a rise in serum prolactin levels are dopamine receptor blockers such as neuroleptics (e.g., haloperidol, sulpiride, chlorpromazine, risperidone, etc.) and antiemetic drugs (e.g., metoclopramide, domperidone).

The classes of drugs* that produce similar effects are

Pituitary adenomas (prolactinomas) are the most common cause of pathologic hyperprolactinemia. Approximately 40% of patients with acromegaly have hyperprolactinemia due to hypersecretion of growth hormone and prolactin. Other pituitary causes include:

Prolactin hypersecretion after impaired hypothalamic/tuberoinfundibular dopamine secretion may be caused by the following:

During the diagnostic work-up of hyperprolactinemia, pregnancy,* lactation, hypothyroidism, and medications should be considered first. 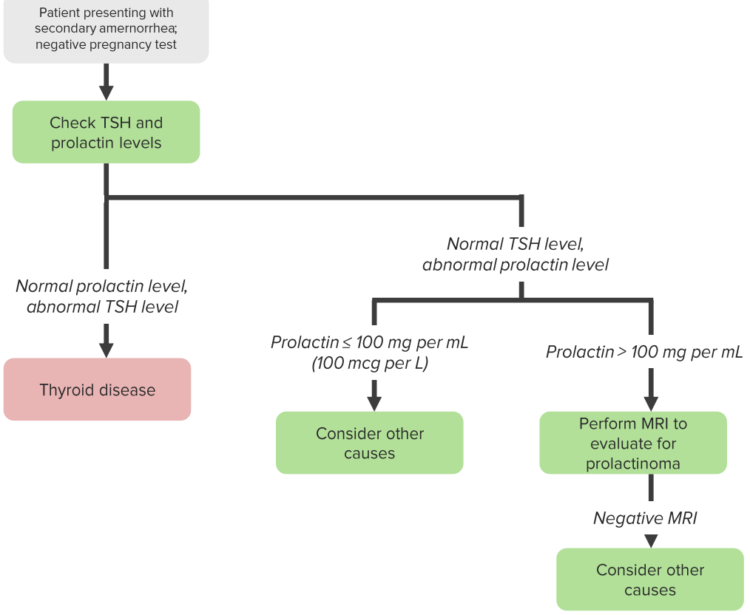 Diagnosis of hyperprolactinema. Image by Lecturio

The condition may be asymptomatic. In men and premenopausal women, hyperprolactinemia presents with typical symptoms that include:

For more information on the differential diagnosis of hyperprolactinemia, refer to the article on prolactinomas.

Patients with hyperprolactinemia do not necessarily need treatment. Asymptomatic patients with microprolactinomas and no interest in fertility can be observed and have routine monitoring through serial prolactin level measurements and annual imaging scans.

Patients indicated for treatment are

*High-yield material for USMLE.For more on bromocriptine and cabergoline, refer to the article on prolactinomas. Another dopamine agonist, pergolide, was previously used for the treatment of hyperprolactinemia. Pergolide was withdrawn from the US market on March 29, 2007, because of heart valve damage leading to cardiac valve regurgitation.

With the advent of surgical microscopes, transsphenoidal pituitary surgery became the preferred choice for surgical treatment. More recently, endonasal endoscopic surgery, which seems to reduce hospitalization time, has become available. These recent developments have made the selective removal of a pituitary adenoma possible with few complications and low mortality rates.

In addition to normalizing prolactin levels, surgery aims to eliminate or diminish the mass effect of macroadenomas, often relieving neurologic and visual manifestations. For tumors with extrasellar locations expanding out of the midline, a transcranial surgical approach is followed.

In patients for whom the tumor cannot be controlled with medication or surgery, radiation therapy is used (rare). Radiotherapy can be given in one of the following ways:

In patients with microprolactinoma, if the dopamine agonists are not tolerated or are contraindicated for any reason, hormonal replacement is a valid alternative for relieving symptoms related to hypogonadism. This is considered for patients who are not interested in fertility and want to eliminate symptoms such as menstrual abnormalities, sexual dysfunction, etc. Testosterone is used for men, and oral contraceptives are used for premenopausal women. There may be a slight increase in prolactin levels in these patients. It is important to be careful: use low doses of estradiol (≤30 μg/day) and closely monitor prolactin levels and tumor growth in these patients.