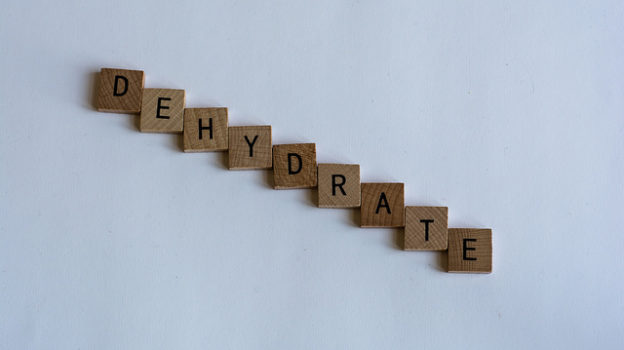 It is an acute complication of diabetes mellitus that sets in as a metabolic derangement characterized by hyperglycemia (>600 mg/dl), hyperosmolarity (>330 mOsm/L) and dehydration but no ketoacidosis.

Insulin deficiency and inadequate fluid intake, coupled with resulting hyperglycemia, are the main trigger agents for HHS. A lack of glucose entry to cells for use leads to an increase in the levels of the counter-regulatory hormones that is associated with increased gluconeogenesis, accelerated conversion of glycogen to glucose, and inadequate use of glucose by peripheral tissues due to insulin resistance.

The deficiency of insulin is not severe enough to trigger ketoacidosis as seen with DKA.

Patients with severe hyperglycemia might develop osmotic diuresis, polyuria, and severe water deficit. This can lead to severe dehydration and the patient would eventually enter a hyperosmolar state; therefore, patients in hyperosmolar hyperglycemic state usually have a much higher serum glucose level compared to those with diabetic ketoacidosis.

Most of the glucose found in the sera of patients with hyperosmolar hyperglycemic state comes from increased hepatic production. Elevated serum glucose levels create an osmolar gradient that withdraws water from the cells. Moreover, the elevated serum glucose levels lead to diuresis; therefore, patients in hyperosmolar hyperglycemic state have severe dehydration, contraction in the extracellular volume, and contraction in the intracellular volume.

Like diabetic ketoacidosis, hyperosmolar hyperglycemic state syndrome is not a disease per-se, but more of a consequence to another pathology that is associated with an increase in the levels of the counter-regulatory hormones.

The current American diabetes association criteria for the diagnosis of hyperosmolar hyperglycemic state syndrome can be summarized in the following points:

Patients who develop hyperosmolar hyperglycemic state syndrome usually become stupor and comatose. Because of the severe dehydration, you expect to see tachycardia, hypotension, decreased skin turgor, and sunken eyes; however, if the cause of the hyperosmolar hyperglycemic state is myocardial infarction, you might see other cardiac rhythms different from sinus tachycardia.

A physical examination of a stroke patient who is in hyperosmolar hyperglycemic state might develop some lateralizing signs in response to pain. For instance, if the stroke was within the right hemisphere, response to pain by motor withdrawal might be limited or absent in the left upper and lower extremities.

Patients who are in a coma should receive a plasma glucose test to exclude hypoglycemia and hyperglycemia; both are common conditions associated with an altered mental status.

Arterial blood gases examination is indicated to exclude acidosis. The pH in patients with hyperosmolar hyperglycemic state is above 7.3. Serum bicarbonate levels are above 18 mEq/L.

Effective serum osmolality, which is calculated by the formula: 2 (Na) + 18/glucose, should be determined as it is part of the diagnostic criteria in hyperosmolar hyperglycemic state. Accordingly, serum electrolytes should be evaluated to determine the concentration of sodium. These are the two main constituents in the serum that affect the osmolar gradient. Total serum osmolality is equal to 2 (Na) + 18/glucose + BUN/2.

Renal function tests to determine the nature and severity of electrolyte derangements.

Blood cultures and acute phase reactants assays to check for the source of infection.

Complete blood counts may suggest the likelihood of an inflammatory process by an elevated white blood cell count.

The current American diabetes association recommendations for the treatment of hyperglycemic state can be summarized in the following points: