Potassium is an important intracellular ion and the sodium-potassium adenosine triphosphatase (Na+K+ – ATPase) pump is responsible for maintaining the cell membrane potential in myocardial muscle cells, as well as nerve and skeletal muscle cells.

The sodium-potassium pump is influenced, in turn, by insulin and beta-2-agonists like catecholamines. The normal K+ levels in serum range from 3 to 5.5. Hyperkalemia is defined as:

Agents used during anesthesia, like succinylcholine for neuromuscular relaxation, can cause sudden onset hyperkalemia in susceptible patients as these patients have an increased number of nicotinic acetylcholine receptors (AChRs) at their neuromuscular junctions. The degree of increase in the receptors depends on the duration of the patient’s underlying condition, such as prolonged immobilization, chronic renal failure, etc.

On administration of succinylcholine in these patients, there is depolarization of all the AChRs, including the junctional receptors throughout the muscle membrane with the efflux of potassium into the extracellular plasma resulting in hyperkalemia. In addition, as succinylcholine is metabolized slowly, there is an exaggerated release of potassium. The consequent elevation in serum potassium levels results in cardiac conduction abnormalities and other clinical features of hyperkalemia.

Predisposing factors for hyperkalemia during anesthesia include:

Other drugs that are known to cause hyperkalemia include:

ACE/ARBs as they inhibit the kidneys ability to excrete excess potassium.

Concurrent use of these drugs should be done with care as they may accentuate the occurrence of hyperkalemia.

In the operating room, the patient is under anesthesia and unable to vocalize any symptoms. So electrocardiographic (ECG) changes accompanied by cardiovascular dysfunction within 5 minutes of succinylcholine administration should alert the anesthesia provider to the possibility of hyperkalemia. 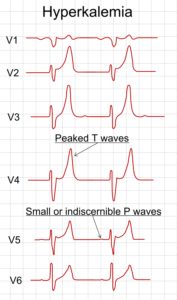 Cardiovascular dysfunction can occur with serum potassium levels between 8 and 12 mEq/l. ECG changes, on the other hand, are usually proportional to the potassium levels, and the changes seen include tall T waves, small, broad, or absent P waves with wide QRS complex, sinusoidal QRST and atrioventricular dissociation or ventricular fibrillation.

These changes progress in stages as follows

Occasionally, ECG changes, as well as cardiovascular dysfunction, may not be obvious in hyperkalemia making diagnosis difficult.

Laboratory tests like arterial blood gas (for acidosis), serum potassium, serum calcium (hypocalcemia can aggravate cardiac conduction anomalies), serum glucose, serum digoxin levels (digoxin can cause hyperkalemia), can be performed to confirm the diagnosis, as well as to determine the etiology.

Malignant hyperthermia (MH): hyperkalemic cardiac arrest in the operating room is often mistaken for MH and dantrolene is administered, but MH usually occurs during anesthesia administration unlike hyperkalemia and is characterized by a rapid increase in end-tidal carbon dioxide, muscle rigidity, hyperthermia, and acidosis. Cardiac arrest in MH is due to metabolic or respiratory acidosis, and not due to hyperkalemia.

It is important to remember that the management of hyperkalemic cardiac arrest does not follow the standard Advanced Cardiac Life Support (ACLS) guidelines for asystole. The anesthesia provider must be aware of this and must institute treatment as soon as electrocardiographic changes or cardiovascular dysfunction are noted on the administration of succinylcholine, especially in susceptible patients.

The aim of the treatment is to antagonize the action of K+ and move it into the intracellular compartment. This is achieved with

Administration of a physiological antagonist i.e. calcium chloride/gluconate infusion under continuous electrocardiographic monitoring. This drug stabilizes the heart muscles from further shift of the potassium thus antagonizing the effects of hyperkalemia. Calcium chloride is the preferred antidote as calcium gluconate is associated with tissue necrosis if it extravasates.

The next step involves shifting the excess extracellular glucose back into the cell. This is achieved by administration of intravenous glucose with insulin. The above measures stabilize potassium levels in 10-20 minutes and maintain this state for 4-6 hours.

Other methods that were applied in the management of hyperkalemia include the administration of catecholamines and sodium bicarbonate as they increase the K+ uptake by the cells, thereby decreasing the extracellular levels. however, the use of bicarb was associated with poor response and an undesired effect of binding to calcium.

Preoperative assessment of the patient by a pediatrician or a physician is essential to determine whether a child has occult myopathy, or whether an adult has a neurological disease (multiple sclerosis/AML) or chronic renal failure which can predispose the patient to hyperkalemia during anesthesia.

Anesthesiologists should be notified so that adequate precautions can be taken to avoid drugs like succinylcholine which can precipitate hyperkalemia. In addition, anesthesia providers should always be alert to the possibility of this condition and start aggressive management to improve outcomes.

Hyperkalemia in Emergency Medicine via medscape.com