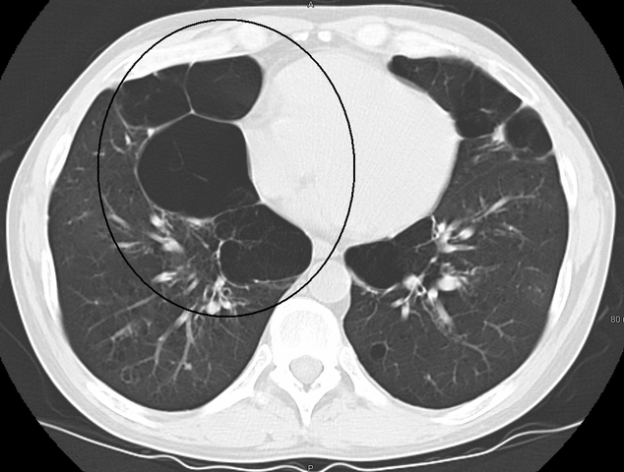 Emphysema is defined as the destruction of the airways distal to the terminal bronchiole especially thinning and damage of the alveoli. It comprises of chronic obstructive pulmonary disease (COPD) caused due to mainly cigarette smoking. Emphysema can be classified into centrilobular, panlobular, and paraseptal based on the pattern of airway destruction. 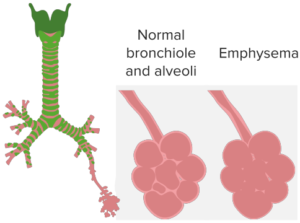 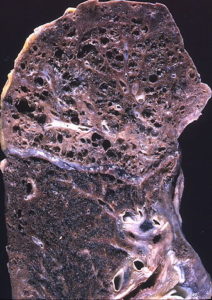 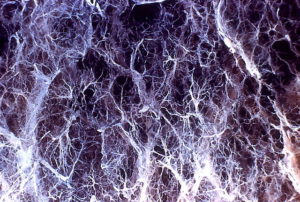 Paraseptal emphysema is characterized by the presence of well-demarcated spaces within the periphery of the lobule because of tissue destruction. Therefore, the central parts of the lobules are not affected by this type of emphysema. When there is focal destruction of the airways without confinement to any lobule, the term bulla is used. Paraseptal emphysema is usually seen in patients with centrilobular emphysema or panlobular emphysema. They are associated with past lung infections and inflammations.

The different types of emphysema typically present with hyperinflation. Therefore, the main finding on imaging studies of emphysema is hyperinflation which can be assessed and identified on conventional chest radiography (Chest x-ray). Other imaging modalities such as multidetector and high-resolution computed tomography are also used in the radiographic evaluation of minor abnormalities in patients with chronic obstructive pulmonary disease.

Chest Radiography in the Evaluation of Emphysema

The most common finding of emphysema on the chest x-ray is the presence of a flat and horizontal diaphragm. This is best appreciated on a lateral view chest x-ray film. The flattening of the diaphragm is caused by hyperinflation of the lungs. Bulla can be seen in chest x-rays indicating emphysema.

A significant number of patients with hyperinflation of the lungs due to emphysema have oligemia or vascular attenuation. The presence of oligemia or avascular regions on the chest x-ray without any evidence of emphysematous changes should alert the radiologist to the possibility of pulmonary embolism.

A bulla can be also seen on the chest x-ray in a patient with emphysema. Bullae have no vessels within them and have a clear line of demarcation between the airspace and the rest of lung parenchyma. Bullae can be also seen independently from emphysema. The main cause of the formation of bullae in emphysema is the chronic effect of positive intrapleural pressure during expiration which is found in patients with chronic obstructive lung disease. 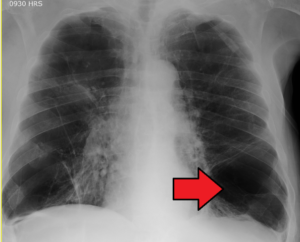 Patients with emphysema and secondary pulmonary hypertension might have an increase in the bronchovascular markings of the lower zones of the lungs. It is hypothesized that the increased markings are caused by bronchial wall thickening due to peribronchial inflammation.

Patients with severe pulmonary hypertension due to emphysema can develop right-sided heart failure. The chest x-ray will reveal hyperinflation of the lungs, cardiomegaly, and vascular engorgement. Pleural effusions are also common at this stage.

Chest radiography has limitations in the diagnosis of the emphysema. It can detect only mild emphysema with the clear visibility of the bullae but cannot clarify the severity of emphysema.

Computed Tomography in the Evaluation of Emphysema

High-resolution computed tomography (HRCT) has introduced a new disease entity in emphysema, known as anatomical emphysema. HRCT has made it possible for us to diagnose anatomical emphysema which is very limited that the patient is expected to be completely asymptomatic at this stage. Additionally, HRCT has shown evidence that a significant proportion of patients with alpha-1 protease deficiency have upper lung zones panlobular emphysema instead of the involvement of lower zones.

HRCT can detect small lung holes due to emphysema as long as the diameter of the hole is larger than 5 mm. Therefore, pathologies that result in smaller abnormalities in the early stages might be missed on an HRCT. 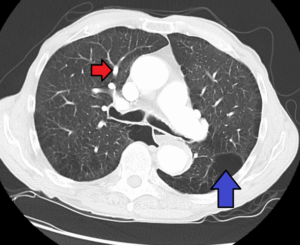 The qualitative analysis of thin HRCT slices during inspiration is best for the detection and characterization of emphysema. The displacement and attenuation of blood vessels can be also assessed on the individual HRCT slices. The patient should limit or stop breathing during the short acquisition time as respiratory motion can obscure emphysematous changes in the lungs.

The following table summarizes the five-point scale used in the visual inspection of HRCT in emphysema.

A bulla is a thin-walled subpleural cavity that is air-filled and is found within the lung parenchyma. These cavities are larger than 1 cm in size and are seen in patients with paraseptal emphysema. Centrilobular emphysema can also be associated with bullae.
Blebs, on the other hand, are not related to emphysema. They are less than 1 cm in size and are found within the visceral pleura. They are usually found in the apical portions of the visceral pleura. Bursting of bulla or Blebs might cause pneumothorax.