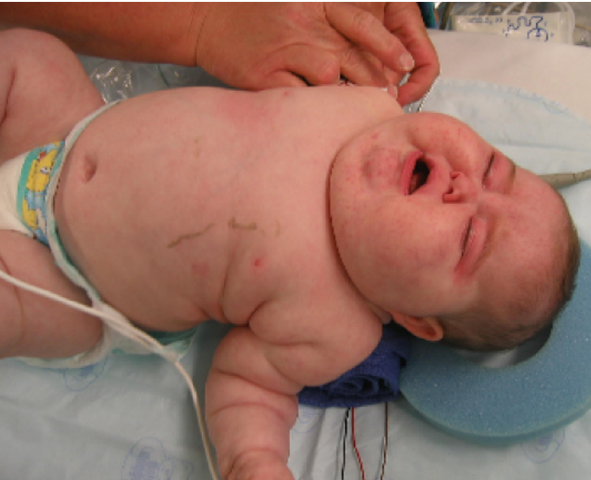 Definition and Etiology of Hypercortisolism

Exogenous hypercortisolism induced by long-term treatment with glucocorticosteroids can be distinguished from an endogenous increase in the synthesis and secretion of cortisol or ACTH.

While the exogenous (iatrogenic) Cushing’s syndrome is very common, its endogenous counterpart affects only two to three individuals in a population of 1 million. Almost three-quarters of such patients manifest central Cushing’s syndrome, up to 10% are due to ectopic (paraneoplastic) ACTH secretion, and about 15% manifest the ACTH-independent form, the adrenal Cushing’s syndrome.

Iatrogenic: Mostly due to exogenous administration of glucocorticoids

The clinical presentation by the affected patients is attributed to the myriad effects of cortisol, and the effects on fat metabolism are very distressing. Truncal obesity with a characteristic ‘bull’s neck’ and ‘’moon face’ is attributed to fat redistribution. The skin shows defective tissue repair with a predisposition to hemorrhages (ecchymosis, hematoma), acne, striae rubrae, atrophy, ulcers, and furuncles.

Protein metabolism with osteoporosis (and an increased risk for fractures or bone necrosis), myopathy with peripheral muscular atrophy, and adynamia are the other manifestations. A diabetic metabolic state may develop. In addition, arterial hypertonia may occur or be exacerbated. Androgen levels may also be increased in ACTH-dependent forms, manifesting as virilization with hirsutism and cycle disorders in women.

Hypokalemia, which arises only in a few cases connected with hypercortisolism, may indicate a tumor in the adrenal cortex or ectopic ACTH synthesis.

The diagnosis is based on clinical symptoms or the patient’s medication history.

High-dose dexamethasone inhibition: Patients are administered 8 mg of dexamethasone for 2 days at midnight, which suppresses cortisol in the case of central Cushing’s syndrome. The cortisol suppression fails to occur in patients with tumors of the adrenal cortex or ectopic cortisol production.

In addition, diagnostic imaging of the sella turcica or the adrenal cortex with CT or MRI can be used to establish hypercortisolism. Paraneoplastic ACTH increases may be accompanied occasionally by an increase in the metabolite lipotropin. 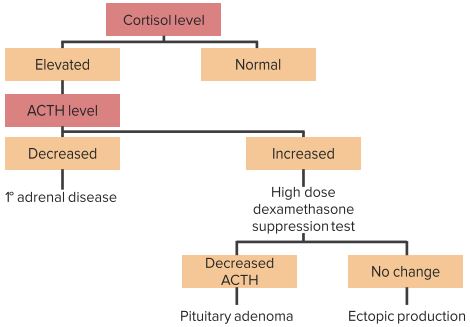 Image: Algorithm for the diagnosis of Cushing’s syndrome. By Lecturio.

Compared with the various etiologic factors contributing to ‘real’ hypercortisolism, the levels of cortisol as a stress hormone might be increased in different psychiatric disorders (e.g., depression). Cushing’s syndrome is not always associated with every random tumor of the adrenal cortex. Hormone-unrelated forms are called incidentalomas. Obesity is another differential diagnosis.

The treatment of hypercortisolism is based on etiology. Hormonally active tumors of the adrenal cortex can be excised with minimal invasion via laparoscopic adrenalectomy. The contralateral adrenal gland generates the hormones. However, a temporary substitution with glucocorticoids may be needed. Central Cushing’s syndrome can also be managed surgically. Radiotherapy is an alternate option.

Note: In this case, post-surgical glucocorticoid supplementation is necessary for life, to avoid the risk of Addison’s disease. Also, the dose should always be adjusted or increased depending on the clinical condition (for example, during profound stress situations, fever, and other strains).

Inoperable tumors of the adrenal cortex or paraneoplastic or ectopic Cushing’s syndrome, which is a phenomenon of ACTH Cushing’s syndrome, can be treated symptomatically by blocking cortisol production. Several preparations are currently available including ketoconazole, octreotide, metyrapone, and aminoglutethimide.