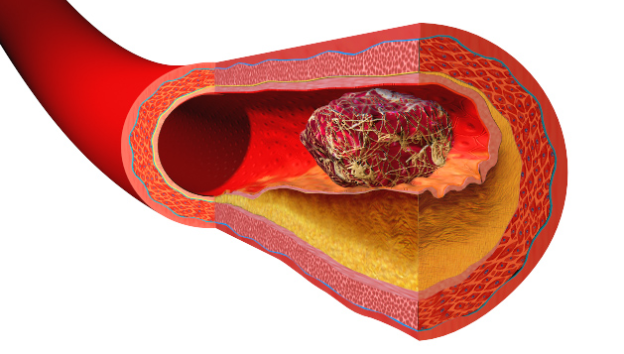 Any of the vessels of the body’s vascular system, including the coronary, mesenteric, cerebral, pulmonary, and portal vessels, as well as the hepatic circulatory system, can become partially or completely occluded as a result of thrombosis, leading to serious consequences.

There are 2 main causes of hypercoagulability. The primary cause includes genetic mutations.

Homeostasis is maintained through an effective regulatory mechanism in the body. Balance is ensured between procoagulant and anticoagulant activity in the blood. Hypercoagulability occurs when the procoagulant factors are excessive and remain unchecked. The specific pathophysiology varies with each subtype of this disorder.

A positive family history, along with signs and symptoms presenting in a child, are strong indicators of an inherited hypercoagulability disorder. The most important genetic causes are discussed below.

Factor V Leiden is the most common type of inherited thrombophilia. People with this type have a mutant form of factor V. This makes it resistant to the inactivating effects of activated protein C (APC). APC is necessary for down-regulating clotting factors such as V and VIII. It is estimated that 20%–60% of patients have a hypercoagulability disorder due to factor V Leiden. On chromosome 1, point mutations in the genes of factor V occur. Glutamic acid and the cleavage site replace arginine, leading to an alteration that makes it resistant to the effects of APC.

Prothrombin 2010A is also called factor II mutation. Prothrombin is an important protein in the coagulation pathway, which generates clots. A genetic mutation occurs, leading to an excess of prothrombin. This, in turn, leads to more clot production. Guanine is replaced with adenine in the noncoding region of factor II genes.

Deficiencies of Proteins C and S

Proteins C and S are synthesized in the liver. Vitamin K is important for the functioning of both these proteins. The genes for protein C are located on chromosome 2, and for protein S, on chromosome 3. Deficiencies are mostly autosomal dominant but can also, rarely, be recessive. These 2 proteins are the natural anticoagulants that prevent excessive clot formations. A deficiency results in an increase in the coagulant activity.

Antithrombin is a protein that acts on the final pathway of the conversion of fibrinogen into fibrin. The protein is transmitted to offspring in an autosomal-dominant pattern of inheritance. Deficiency or the inheritance of dysfunctional protein can lead to unrestricted procoagulant activity and clot formation. When a deficiency of antithrombin occurs, the clotting factors X and activated thrombin cannot be neutralized.

High levels of homocysteine produce effects such as the following:

Levels of homocysteine are closely linked to levels of vitamin B in the body. Low levels of this vitamin are associated with elevated concentrations.

The secondary causes of hypercoagulability can be seen in Virchow’s triad (see image). The presence of any of these risk factors leads to a hypercoagulable state and clot formation.

Venous stasis results from events such as:

Endothelial damage results from the following:

Physiological or pathological hypercoagulability states include the following: 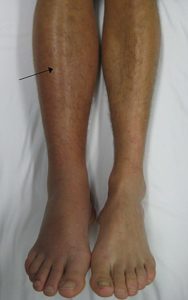 There are no definitive clinical signs and symptoms of thrombophilia. Various investigations are needed to detect a hypercoagulable state. Some of the clinical manifestations that can be clues to an underlying ongoing process of thrombosis include the following:

The diagnosis of thrombophilia is based on clinical judgment and an initial evaluation. It is not necessary to use every test when assessing a patient. The decision to undertake a particular investigation is based on physical examination findings and clinical scoring of the patient for the pretest probability of having the disease.

Scoring systems include the following:

Other tests to consider include the following:

Supportive management is focused on avoiding the formation of a clot, its dislodgment, and transport to vital organs. This is achieved by thinning the blood, thereby making it more resistant to clotting, through the administration of various types of anticoagulant drugs. 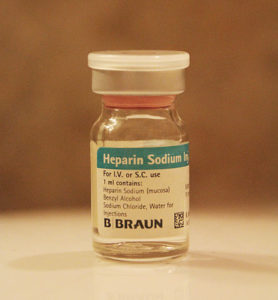 Heparin injections are administered for immediate action in emergency cases. They can be given as infusions or subcutaneous injections and are therefore more suited to use in in-patient settings. However, these patients need long-term therapy, and therefore heparin infusion cannot solely be relied on. Newer subcutaneous agents should be considered for outpatient use.

Warfarin tablets are mostly given as maintenance therapy, as they have a predictable dose-response. Warfarin must be bridged with heparin for 3–5 days for the following reasons:

Currently, new oral anticoagulant agents such as rivaroxaban and apixaban are the drugs of choice, due to their ease of administration and a well-predicted dose-response that does not require the same level of monitoring compared with heparin or warfarin.