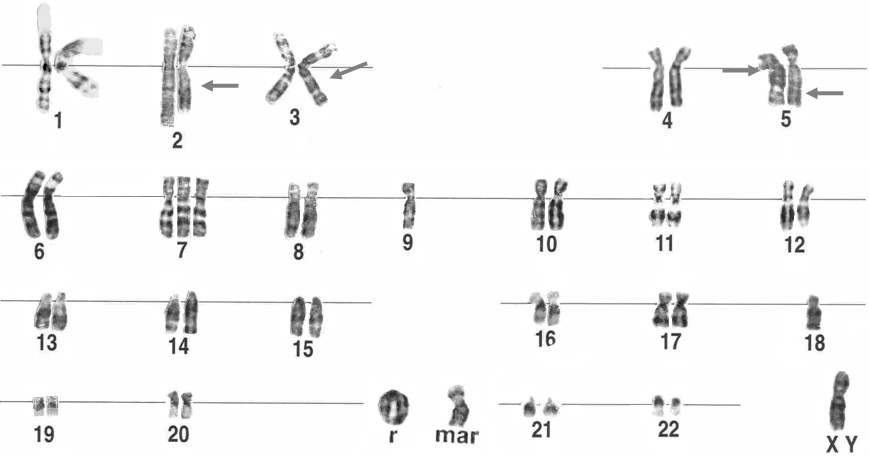 Image: “Representative karyotype from a well differentiated transitional cell carcinoma of the bladder.” by Fadl-Elmula. License: CC BY 2.0

Human Genetics: What is It?

Human genetics deals with the genetic constitution of human beings. In this area, medical diagnostics and molecular biological research work closely together. In pre-clinic semesters, the basic concepts, different inheritance traits, and pedigree analyses are the most important concepts to learn.

Study tip: For each mode of inheritance, take a close look at the genealogical tree of a typical disease and try to understand why a person is diseased and what the individual phenotypes and genotypes look like. 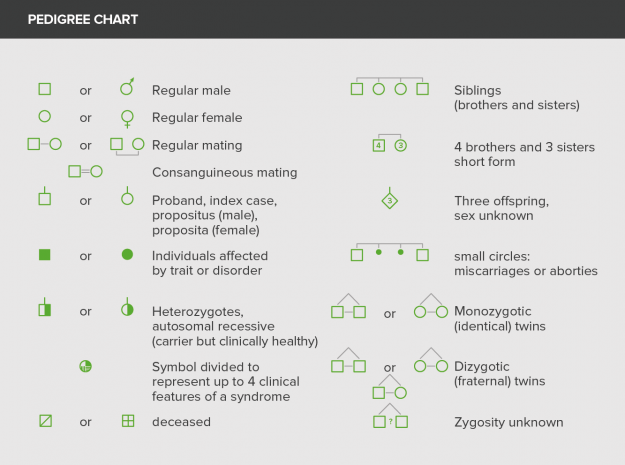 Symbols of genetics. Image by Lecturio

In autosomal inheritance, genetic information is located on chromosomes 1–22. Thus, inheritance is not gender-specific.

If traits are inherited as autosomal dominant, they may be expressed in the heterozygous or homozygous state. An organism can be homozygous dominant if it carries 2 copies of the same dominant allele, or homozygous recessive if it carries 2 copies of the same recessive allele. Heterozygous means that an organism has 2 different alleles of a gene. Statistically, the most frequent distribution is the inheritance from 1 parent to half of the children (in cases of complete penetrance).

An allele is 1 of the possible forms of a gene. Most genes have 2 alleles: a dominant allele and a recessive allele. If an organism is heterozygous for that trait or possesses 1 of each allele, then the dominant trait is expressed.

If the trait is the trigger for disease, homozygous individuals are often affected more severely than heterozygous ones. Autosomal dominant diseases can be tracked over generations, since, in every generation, persons are diseased. (Exceptions include achondroplasia and Marfan’s syndrome, which are due to de novo mutations.)

Hint: Autosomal dominant diseases are often associated with a dysfunctional structure of cells and tissues.

In autosomal recessive inheritance, the carrier must be homozygous for the trait to be inherited. Heterozygous people act as carriers but they do not express the respective phenotype. A phenotypically diseased person must inherit the recessive gene from both parents.

In pedigrees, autosomal-recessive diseases are not as easy to track as autosomal-dominant diseases. Several generations can not exhibit the trait before someone becomes diseased again. The offspring from marriages between related persons are affected more often, as the chance that both parents carry the recessive gene is increased.

An autosomal recessive trait that does not represent a disease is blood type 0.

In the human set of chromosomes, 1 pair of chromosomes is not homologous: the gonosomes X and Y. They determine the genetic gender.

The following table provides an overview of the properties and functions of the Y and X chromosomes.

Traits bound to the gonosomes are present if the respective trait is located on 1 of the 2 gender chromosomes. 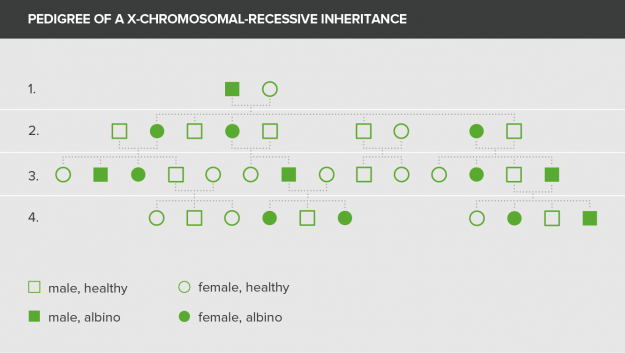 Pedigree of an X-chromosomal-dominant inheritance. Image b Lecturio

A very famous genealogical tree showing an X-linked recessive disease is the family tree of Queen Victoria of England. The royal family suffered from hemophilia. 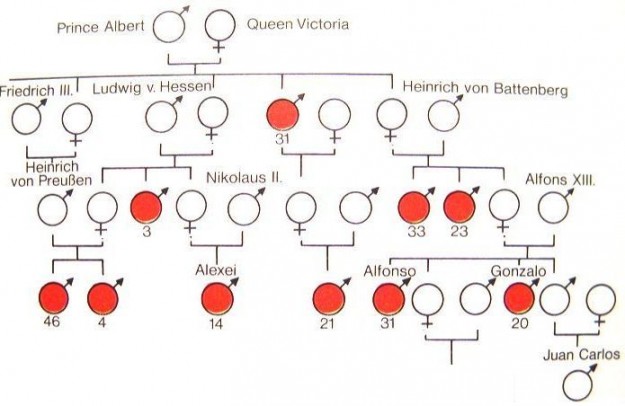 There are 20 different blood-type systems. The most important ones are the AB0 system, the MN system, and the Rh system.

The AB0 blood-type system is present in multiple alleles (genetic polymorphism). In multiple alleles, there are 2 alleles of 1 gene within a population. In each individual, these alleles behave dominantly/recessively or co-dominantly. In the AB0 system, the following alleles exist:

In co-dominance, both alleles simultaneously appear in the phenotype (at heterozygosity). In pure co-dominant inheritance, one can always directly deduct the genotype from the phenotype: no recessive gene that could hide is present. An example of this is the MN blood-type system. There are 2 different alleles of a protein in the glycocalyx of the erythrocytes in the MN system.

The following table summarizes the genotypes and resulting phenotypes of the blood type inheritance in the MN system and the AB0 system. These rules of inheritance can be used for an intermittent paternity test. If the blood-type constellation between father and child does not fit, paternity can be excluded and further genetic tests are not needed.

The mother then produces antibodies against Rh. They are able to pass through the placenta during the next pregnancy and agglutinate the Rh-positive erythrocytes in the fetal organism. The consequence is severe jaundice of the child at birth, with severe cerebral damage.

After the birth of the first child, the mother is injected with a high dose of Rh-antibodies. They mask the child-Rh-antigens and make for a quick elimination; as a result, no maternal Rh-antibodies are produced.

Everything you have learned so far shows that most genes are present twice: 1 of the mother’s and 1 of the father’s. According to Mendel’s rules, dominant alleles determine the phenotype. For some kinds of inheritance, however, it has been observed that it is crucial from which parent the affected allele was inherited.

Genomic imprinting occurs over again in each generation, when the inherited imprints are deleted.

Question: Two brothers suffer from a recessively inherited X-chromosomal disease. How great is the risk for their niece (the daughter of the sister) to be a heterozygous conductor?

Solution: Both brothers must have inherited the mutated allele from their mother. As a healthy conductor (Xx), the mother gives the allele to her daughter (probability of 50% (p = 1/2)). She then gives the mutated allele (probability is 50%) to her children (her husband is healthy and is, thus, not involved in the calculation). The probability for her niece to be affected is calculated via the product of the individual probabilities, i.e., ½ x ½ = ¼ = 25%