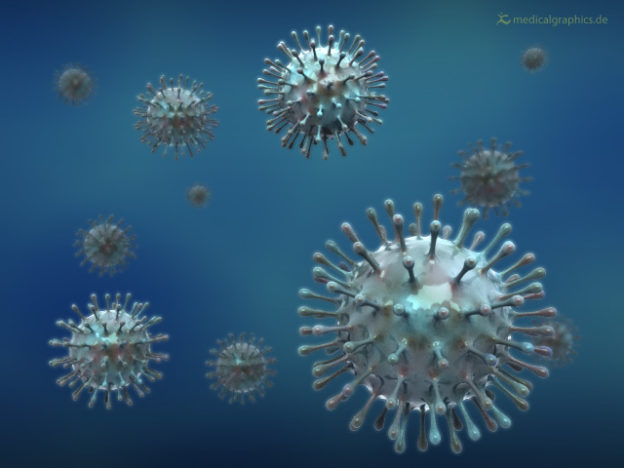 The nucleus contains chromatin, which is a complex of DNA and histone proteins, and the nucleolus (the site of ribosome synthesis). In addition to the nucleus that encodes genes, eukaryotes possess an endoplasmic reticulum, studded on its outer surface with ribosomes where the synthesis of many of their cellular components occurs. These components are further modified subsequently in the Golgi apparatus. Aerobic respiration takes place in the mitochondria or chloroplasts in photosynthetic cells.

Eukaryotes possess other organelles, such as lysosomes and peroxisomes, which function as the digestive system of the cell. Vacuoles are present more frequently in plant cells than in animal cells, where they serve as storage deposits of water and other materials. The cytosol houses the enzymes of various pathways, for example, those of glycolysis. Cytosol also contains the cytoskeleton, which is a microscopic network of protein filaments that serve to give the cell its shape and the ability to migrate. 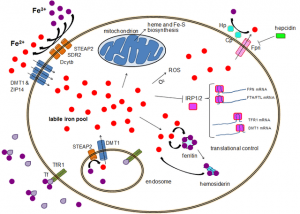 Prokaryotes are the most numerous organisms on the planet. They are also the most widespread, due to the highly adaptive metabolisms that allow them to survive in a great array of different habitats.

Prokaryotes are simple, single-celled organisms that do not have a nucleus or membrane-bound organelles. They are classified into bacteria and archaea. They have a relatively simple cell structure in comparison to eukaryotes. The vast majority of bacteria are unicellular, with a notable exception being that some can form colonies of independent cells or filaments. Prokaryotes widely range in size, largely due to the basic three morphologies they can present: spheroidal (cocci), rod-like (bacilli), and coiled (spirilla).

Both prokaryotes and eukaryotes have a cell membrane. Inside of the cell, their metabolic functions occur regionally, without rigid limitations or localization (an important feature of eukaryotic cells). Their replication, transcription, and translation material is housed in the cytosol, and their DNA is circular rather than the linear form that eukaryotic cells possess.

The plasma membrane, cytoplasm, DNA, and ribosomes are key components of prokaryotic cells. The outermost covering of the cell, which differentiates the cell’s interior from the surrounding environment, is called the plasma membrane. The cell’s jelly-like content is called cytosol or cytoplasm. It holds the cell’s organelles, structural proteins, and many biomolecules and also takes up all the space between the of the plasma membrane and the nucleoid. DNA is the genetic constituent of the cell and is present in the nucleoid. The cellular structures responsible for the synthesis of proteins are called ribosomes. 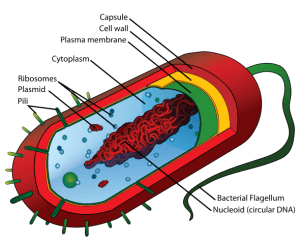 The bacterial flagellum is smaller and simpler in structure and is made up of a protein called flagellin. It is proton-gradient driven, capable of rotary movement and attachment to host cells and other surfaces. Rod-like structures named pili are present in some bacteria. These play a role in transferring DNA molecules to other bacterias and are also used for locomotion.

This is different from eukaryotic flagella, which are larger, more complex in structure, and are comprised of proteins called tubulin, in an apparent 9+2 arrangement. Eukaryotic flagella are ATP-driven, allowing them to perform a bending movement. Archaea may also have most of these cell surface features, but their versions of each feature are typically different from those of bacteria.

Viruses are simpler than cells and are not considered ‘living organisms’ because they lack the metabolic repertoire to reproduce without a host cell. They are small protein particles surrounded by a protein coat that instead replicate inside of the cells they infect. They range in size from 20-300 nm.

Viruses are not capable of movement, and they are incapable of replicating outside of a host cell. They also do not possess a metabolic pathway. Outside the host cell, they exist in a form known as a virion, which is comprised of DNA or RNA enclosed in a protein capsid, or in some cases enveloped in a matrix of lipids derived from the host cell’s membrane. 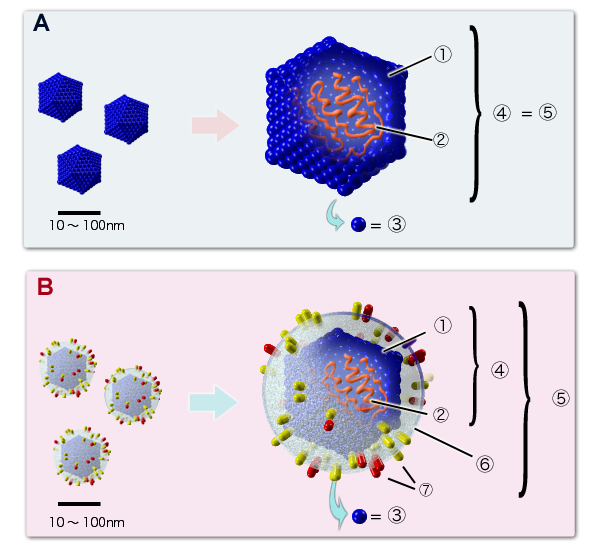 A virus is classified according to its genetic material into either a DNA or RNA virus, with RNA viruses forming the vast majority. Their genomic material can also be either single-stranded or double-stranded in nature and are either linear or circular. Some viruses have the unique ability to integrate DNA produced by reverse transcription into the host’s genome; these are called retroviruses. An important example of retroviruses is the human immunodeficiency virus (HIV).

Homeostasis reflects the ability of an organism to maintain a relatively stable metabolism and to function normally despite many constant changes in its environment. The changes that are part of normal metabolism may be internal or external, and the organism must respond appropriately.

This is accomplished by the use of control systems comprised of three parts: receptor, control center, and effector.

A receptor is a body structure that detects changes in a variable, which can either be a chemical or a process that is regulated. Receptors typically are comprised of nerve cells (e.g. skin receptors), that relay signals to the rest of the organism after experiencing a change in a variable, or stimulus (e.g. touch or temperature). Another example of a receptor is the retina of your eye, which detects changes in the level of light (the stimulus) that enters the eye. 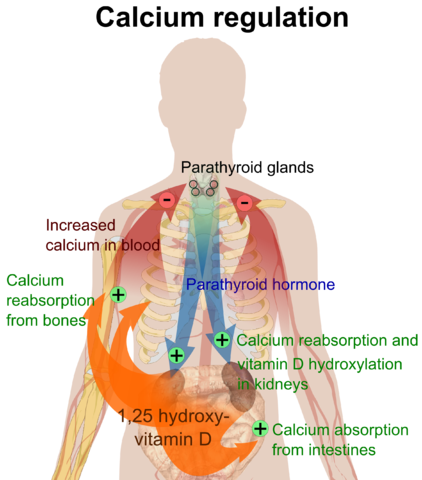 A homeostatic mechanism involving the nervous system provides a relatively quick means of responding to change. For example, your blood pressure must be regulated when you rise up from a night’s sleep in the morning. Your endocrine system equips you with a more sustained response, generally lasting several hours or even days through the release of hormones. For example, parathyroid hormone regulates your blood calcium levels in a process that is paramount to the functioning of your muscles and nerve cells.

Sometimes the receptor, control center, and effector are all located in the same organ. A good example of this is your pancreas, which acts as a receptor when it detects an increase in blood glucose, and also acts as the effector when it releases insulin.

An effector is a structure that brings about changes to alter the stimulus. Most body structures can serve as effectors. The most common effectors are muscles and glands. For example, smooth muscles in the walls of bronchioles regulate airflow into and out of the lungs.

Most of the processes in your body are controlled by negative feedback. In this type of homeostatic control, the resulting action will always be in the opposite direction of the stimulus. In this way, the variable is maintained within a normal level, or what is called it’s set point.

Homeostatic mechanisms modulate blood pressure, blood glucose levels, body temperature, body fluid composition, heart rate, among many others. They enable the body to constantly be in a steady-state and to respond to ever-changing circumstances. Through homeostasis, for instance, the body can return the breathing pattern to normal after exercise.

Homeostasis Examples in the Human Body

An example of homeostasis in the human body is the release of insulin by the pancreas when the glucose levels get too high. The maintenance of blood pressure is another, already mentioned, one. A third common example is a human body retaining a temperature of 98.6°F. The body can control it by making or releasing heat.

A good way to think about negative feedback is the maintaining of constant body temperature.

On a very cold day, a decrease in body temperature is detected by the sensory receptors of the skin, which send nerve impulses to the hypothalamus (a component of the brain). The hypothalamus makes a comparison between the sensory inputs and your body’s temperature setpoint, and then it transmits motor output responses to the blood vessels in your skin in order to decrease their diameter.

This effectively decreases the amount of blood circulating to the surface of your body, and less heat will be released through the skin. Nerve impulses will also be sent to your skeletal muscles, which will cause shivering, as well as to the smooth muscle associated with hair follicles in the skin, causing ‘goosebumps’. 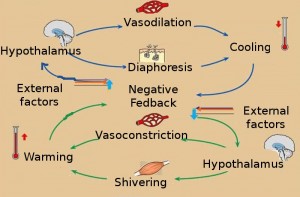 On a hot day or when you exercise, an increase in body temperature is detected by both the skin’s sensory receptor and your hypothalamus. The hypothalamus will transmit motor input to the blood vessels in the skin to dilate, which effectively allows more blood to be brought to the surface of your body and heat will be released. Nerve impulses are also sent from the hypothalamus to your sweat glands to initiate sweating. Both of these responses will help to cool your body through the loss of heat from its surface. In these examples, regulation occurs through the nervous system.

An example of positive feedback occurs when a mother breastfeeds her child. The stimulus of her baby suckling promotes the release of oxytocin hormone, which will stimulate the breast glands to secrete milk. Thus, homeostasis of the body depends on the ability of our body to detect and oppose changes due to both external and internal causes.

A homeostatic imbalance is the inability to maintain homeostasis. It occurs when cells in the body experience a deficiency, e.g. due to exposure to toxins or other internal and external influences. Diseases that may result from this imbalance include heart failure, dehydration, diabetes, hypoglycemia, hyperglycemia, among many others.

Viruses do not maintain their own homeostasis, only living things do. They are not able to control their internal environment. Viruses cannot be thought of as living because they lack the metabolic repertoire to reproduce without a host cell.

Are viruses prokaryotic or eukaryotic?

Viruses are considered neither eukaryotes nor prokaryotes. They are simpler than cells and lack the characteristics of living things. They are small protein particles and are only able to replicate inside of the cells they infect.

Campbell, N.A. and Reece, J.B., Biology (8th ed.), Benjamin/Cummings (2008). [This and other comprehensive general biology texts provide details about the structures of prokaryotes and eukaryotes.]

DeLong, E.F. and Pace, N.R., Environmental diversity of bacteria and archaea, Syst. Biol. 593, 470–478 (2001). [Describes some of the challenges of classifying microbial organisms among the three domains.]

Cramer, P. and Arnold, A., Proteins: how RNA polymerases work, Curr. Opin. Struct. Biol. 19, 680–682 (2009). [The editorial overview of a series of authoritative reviews on numerous aspects of RNA polymerases.

2 thoughts on “Homeostasis in Eukaryotic, Prokaryotic, and Viral Cells”