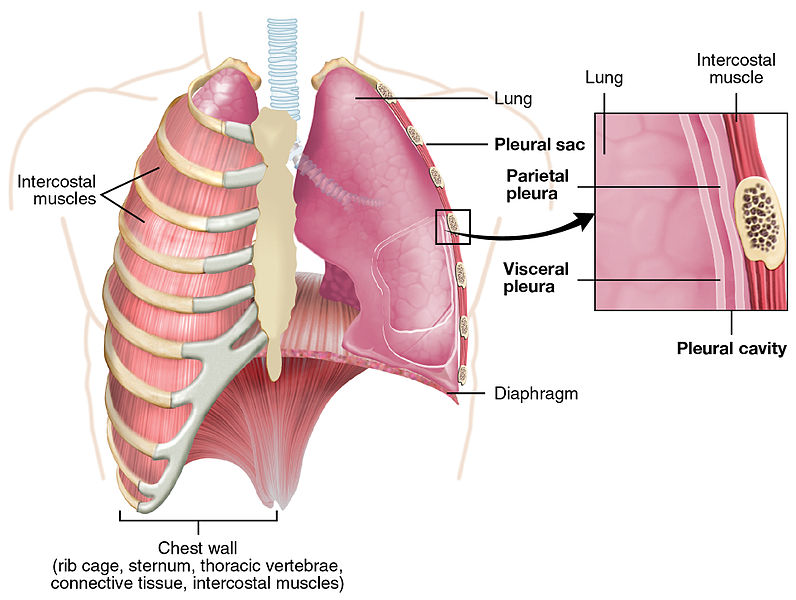 Image:” The Lung Pleurea” by OpenStax College. License: (CC BY 3.0)

The airway facilitates mechanical respiration and is divided into the following: 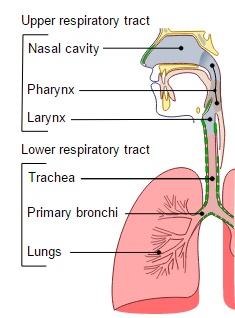 The airways are lined by a special mucosa, and reinforcements in the walls of the airways hold them open. The upper airways (nasal cavity and pharynx) are surrounded by bones. The wall of the lower airways contains a support frame made of special cartilage.

The mucosa (tunica mucosa) consists of the epithelial lamina and the lamina propria, which is made up of connective tissue. It contains the characteristic respiratory epithelium, which is a ciliated pseudostratified columnar epithelium with goblet cells.

Location and Structure of the Trachea and the Main Bronchi

The lower airways start below the glottis. The trachea is a long tube that runs from the larynx and bifurcates into the two main bronchi at the junction of the fourth and fifth thoracic vertebrae. The right main bronchus (bronchus principalis dexter) supplies the right lung with its three lobes; the left main bronchus (bronchus principalis sinister) supplies the left lung with its two lobes. Overall, the bronchi divide into nearly 23 smaller branches before they reach the alveoli.

The trachea is divided into the neck and thoracic portions and is located ventral to the esophagus.

The main bronchi and trachea are supported by a frame of 16–20 C- or hoof-shaped rings of hyaline cartilage. These rings are open dorsally, but the trachea is closed by a connective tissue wall containing transverse muscle fibers known as paries membranaceus. The cartilage rings are connected to each other longitudinally by annular ligaments.

The whole support frame is referred to as the tunica fibromusculocartilaginea.

Note: The tracheal structure is relatively easy to understand because of the three-layered structure of the wall, as discussed next.

Microscopic Structure of the Trachea 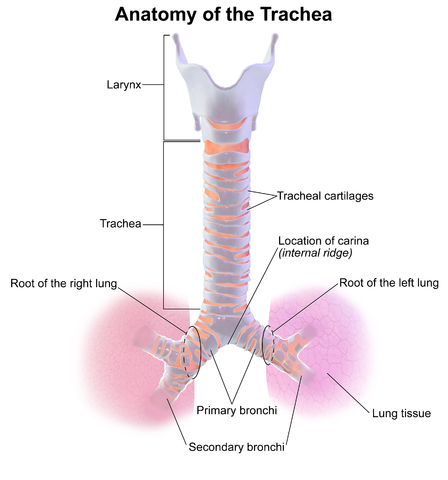 Image: Microscopic structure of the trachea. By Bruce Blaus. License: CC BY 3.0.

The wall of the trachea consists of the following three layers:

1.  Tunica mucosa: The tunica mucosa is the inner layer of the mucosa; it consists of respiratory epithelium, except for the bifurcated noncornified squamous epithelium. The lamina propria contains seromucous glands (tracheal glands). The mucosa is rich in afferent nerve fibers, which, among other things, are responsible for the cough reflex.

2. Tunica fibromusculocartilaginea: The most prominent structure in the tunica fibromusculocartilaginea is the hyaline cartilage ring, which contains a strong perichondrium. The horizontal tracheal muscle in the paries membranaceus closes the dorsal gap caused by the cartilage rings. The horizontal orientation of the muscle fibers alters the contraction of the tracheal muscle.

The annular ligaments connect the cartilage rings to each other. This layer contains multiple elastic fibers oriented longitudinally, which facilitates adaptation of the trachea and the main bronchial elastic tubes that are arranged longitudinally in relation to the surrounding movements.

3. Tunica adventitia: The tunica adventitia is a loose layer of connective tissue that not only connects the trachea with its surrounding structures but also ensures tracheal flexibility during swallowing or coughing.

Tracheomalacia is caused by obstruction of the trachea by an enlarged thyroid gland (struma). It is characterized by softening of the cartilage rings and loss of stability, which causes the anteroposterior diameter of the trachea to be lost. Tracheal collapse during times of increased airflow causes coughing, crying, or feeding difficulty.

Note: It is almost impossible to confuse the extrapulmonary airways (trachea and main bronchi) with other hollow organs histologically as long as you remember their key features: macroscopic cartilaginous rings, abundant respiratory epithelium, and seromucous glands. This combination is found in no other hollow organ.

Image: The lung pleura. By OpenStax College. License: CC BY 3.0.

The lungs are located in the pleural cavity. Their lobes are covered by the visceral pleura (pleura pulmonalis), which is in contact with the parietal pleura. Physiologically, capillary adhesion between the two serous sheets is ensured by the pleural fluid. Thus, the lung surface can be moved against the thoracic walls but cannot be separated from it during its movements.

The large network of elastic fibers causes the tendency of the lungs to always contract. The fibers are under constant tension, reducing the lungs to a fist-sized structure if adhesion between the lung surface and the thoracic wall disappears (pneumothorax occurs when the lungs collapse to their minimal volume).

The bronchi are dichotomous, which means that two smaller branches arise from a larger one. The human lung branches an estimated 21 to 23 times on its route from the trachea to the alveoli. Nearly 15 such branches form the conducting airway in the lungs, while the remainder, including the respiratory bronchioles and the alveolar duct, are involved in gas exchange.

The main bronchi split into lobe bronchi (bronchi lobares; three on the right, two on the left) after they enter the lungs and are extrapulmonary.

The lobe bronchi then split dichotomously inside the lungs into segmental bronchi (bronchi segmentales). The dichotomous splitting of the bronchi continues, often irregularly, with a single branch dividing into two unequal ones. The stronger branch runs in the same direction as the large one, while the remaining branch turns and eventually runs in the opposite direction. Therefore, the central areas of the lung carry terminal branches and alveoli.

The branching of the bronchial tree results in the following structures: 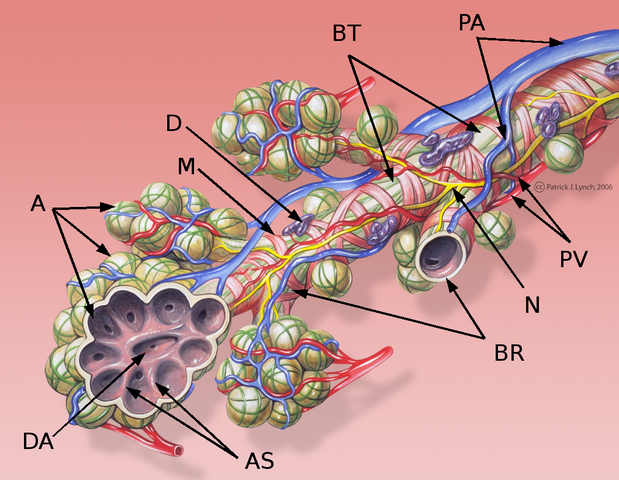 The bronchi are distinguished from the trachea by having irregular cartilage plates instead of hyaline cartilage rings in the walls of intrapulmonary airways. Furthermore, the paries membranaceus does not exist in the bronchi, and muscle cells are arranged circularly. The wall is composed of layers, as discussed next.

Tunica mucosa: The tunica mucosa consists of respiratory epithelium and the lamina propria, with embedded seromucous bronchial glands (glandulae bronchiales) and goblet cells. Elastic fibers, free cells of the immune system, and a continuous coat of smooth muscles are found in the histologic preparation.

Tunica musculofibrocartilaginea: The supporting framework is composed of irregular hyaline cartilage plates, smooth muscles, and connective tissue. Small fragments of elastic cartilage are found in the small bronchi, and these form the outer layer. The continuous circular muscle layer (tunica muscularis) is located on the inside. Seromucous glands located between the cartilage layers synthesize mucins for the mucus-covered epithelial surface. Also, they secrete antibacterial substances, immunoglobulin A (IgA), and protease inhibitors for inactivation of tissue-damaging proteases, which are liberated by immune cells.

In contrast to the bronchi, the bronchioles differ from the rest of the bronchial tree mainly by the absence of cartilage and glands.

Tunica mucosa: The mucosa comprises a single layer of mostly ciliated cuboidal epithelium without goblet cells. Each of the bronchioles encloses a star-shaped lumen that has a diameter of less than 1 mm.

Tunica adventitia: The peribronchial connective tissue is indirectly connected to the lung surface via elastic fibers of the surrounding alveolar walls and the interlobular and intersegmental septa of the connective tissue. The radial tension exerted on the bronchioles keeps them open and prevents their collapse, thereby compensating for the lack of a cartilage framework.

The final branching of the bronchioles represents the end of the conductive airway. The epithelium comprises nonciliated secretory cells (also known as Clara cells). They arch into the lumen-like pistons. At the apex, they contain secretory granules comprising the surfactant proteins A and D (SP-A and SP-D), as well as the Clara cell 10-kDa protein (CC 10); these in part contribute to the natural immune response.

These proteins decrease the antimicrobial mechanism of tissue-damaging inflammatory reactions. SP-A and SP-D also act as opsonins, which facilitate phagocytosis of pathogens by immune cells. Clara cells serve as the reserve for cell replacement in the distal airways.

Acini are airways that originate from the terminal bronchioles.

Alveolar ducts and saccules represent the vestibules of the alveoli. A ring of smooth muscles and collagenous and elastic fibers reinforce the entrance to the alveoli.

Gas Exchange in the Alveoli

Alveoli are polygonal spaces that are filled with air. They are separated from each other by thin walls (interalveolar septa). These interalveolar septa (or alveolar walls) are structures in which gas exchange occurs via diffusion.

The interalveolar septa is covered bilaterally by a thin epithelial layer of plate-like cytoplasmic extensions of type I alveolar cells (pneumocytes), also referred to as covering cells. They contain an extensive soma, which covers the capillaries (blood–air barrier) and lines the major portion (95%) of the alveoli.

The space between the flat type I cells, which is not involved in gas exchange, is filled with larger cuboid type II alveolar epithelial cells (pneumocytes). These contain several organelles and lamellar corpuscles, which produce and secrete the surfactant. Type II cells replace type I cells.

All extensions of adjoining alveolar epithelial cells are connected to each other by tight junctions; these junctions are the most important barriers against lymphatic drainage from the interstitium into the alveoli. The alveolar epithelium is not directly in contact with air but rather is covered by a liquid film. The surface tension of this film is decreased by the surfactant. 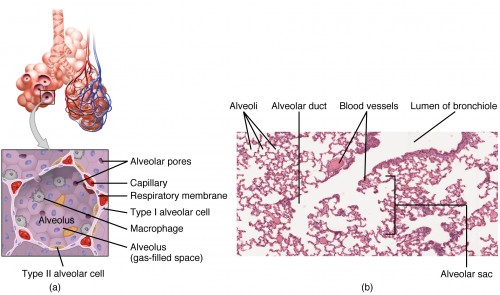 Image: Structures of the respiratory zone. (a) Xxxxx. (b) Xxxxx. By Phil Schatz. License: CC BY 4.0.

Anatomically, the blood–air barrier consists of a thin area comprising the following components (from alveolus to the capillary):

The thickness of this tissue barrier in the lungs is only 0.6 μm, and thus it facilitates respiratory gas exchange. The diffusion between the air in the alveoli and erythrocytes occurs at about 1.1 μm, which allows the passage of fluid film through the alveolar epithelium and the blood plasma in addition to other anatomic structures. 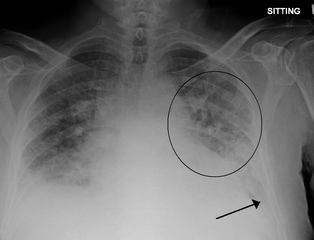 Commonly referred to as water in the lung, pulmonary edema is an acute disease. Fluid accumulates in the connective tissue and the alveoli, making it difficult to breathe. Pressure buildup in the capillaries may be caused by myocardial failure and leads to a backup of blood in the pulmonary circulation. The accumulation in the connective tissue (and thus in the blood–air barrier) impairs diffusion and, therefore, hinders gas exchange. Fluids are transferred to the alveoli. Noncardiogenic causes of pulmonary edema include severe pneumonia and other respiratory tract diseases.

Sudden, acute pulmonary edema is an emergency. Patients present with dyspnea, a feeling of suffocation or drowning, wheezing or gasping for breath, anxiety, chest pain, and palpitations.

Without surfactants, the enormous surface tension at the water–air interface would lead to an irreversible collapse of alveoli during exhalation (atelectasis means ‘not inflated alveolus’).

The major component (90%) of the antiatelectasis factor consists of phospholipids (dipalmitoylphosphatidylcholine, a lecithin), and the remainder (10%) is composed of surfactant proteins. The phospholipids lower the surface tension of the fluid film on the alveolar surface. Surfactant is produced and secreted by type II pneumocytes and is stored in organelles known as lamellar bodies.

Because of their amphiphilic (hydrophilic and hydrophobic) properties, phospholipids spread as a monomolecular layer over the water–air interface after exocytosis of the type II cells. A majority of the surfactant is recirculated via reuptake and release from type II cells, and the remainder is eliminated by alveolar macrophages.