Histology of the Kidney – Cortex to Medulla | Medical Library 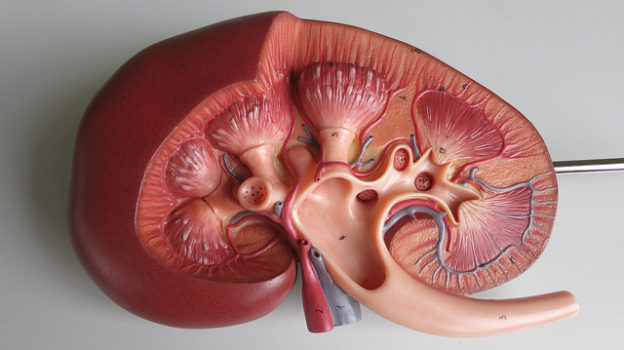 The kidneys are 2 retroperitoneal organs weighing about 150 grams each. They are lined and protected by a fibrous capsule. The kidneys play a key role in the ultrafiltration and excretion of metabolic waste products, maintenance of electrolyte and water balance, secretion of hormones, and in ensuring acid-base homeostasis.

The nephron is the smallest functional unit of the kidney, which filters urine from the blood. A kidney contains about 1.4 x 106 nephrons. Structurally, the nephron consists of a bundle of capillaries (glomerulus) and a Bowman’s capsule forming the renal corpuscle, which passes into the renal canaliculi comprising proximal, intermediate and distal tubules.

The Bowman’s capsule can be imagined as a bubble containing the glomerulus. It is lined by a visceral layer, which is in contact with the glomerulus and a parietal layer, which forms the wall of the ‘ball’. A tubule leaves the capsular space (urinary pole) at the opposite end of the entry and exit of the capillaries (vascular pole). It drains the primary urine from the capsular space.

Note: The renal corpuscle is only a part of the nephron.

The filtrate overcomes 3 barriers to reach the capsular space: the endothelium, the glomerular basement membrane, and the slit membrane of the podocytes.

The nephron tubule converts the primary urine into the final urine via reabsorption of about 99% of the filtered water, glucose, and electrolytes. The epithelium is connected via tight junctions in every section. It contains a distinct basal labyrinth (folding of the basement membrane) and multiple mitochondria to meet the high energy demand.

The nephron tubule appears as a dark basal striation of the cells under a light microscope. Further, the segments differ in terms of structure and function. The segments of the tubule starting from the urinary pole of the renal corpuscle, and their main functions are listed below. The specific epithelia are discussed in detail, later.

Note: The collecting duct is not a developmental biological and anatomical component of the nephron. It is listed in the table above due to its role in urine production.

The cubic epithelial cells are interlocked and carry a distinct basal labyrinth as well as a high brush border. The basolateral Na-K-ATPase is the driving force for reabsorption of amino acids, sodium, and glucose. Water osmotically diffuses through the zonulae occludentes (tight junctions) of the epithelium.

The cells of the intermediate tubule are rather flat, and the lumen of the tubule is the smallest (12–15 µm). The nuclei often curve into the lumen. The cytoplasm is thicker than the cytoplasm inside the blood capillaries. In the descending portion of the loop of Henle, the epithelium is permeable to water, while it is impermeable in the ascending segment, thus contributing to the concentration of the final urine.

The epithelium is cubic with a round nucleus and has a distinct basal labyrinth as well as single microvilli inside the tubule lumen. The tight junctions are particularly distinct here and the epithelium is absolutely impermeable to water.

The Collecting Duct—Fine Adjustment of the Final Urine

The collecting duct is not related to nephron either biologically or functionally. Urine from about 11 nephrons in the cortex proceeds through the outer and inner medullary collecting ducts along with the medullary rays to the renal medulla and papilla.

En route, the collecting ducts repeatedly merge and the lumen widens up to 200 µm. The epithelium changes from cubic to prismatic shape, and a rarely distinct basal labyrinth. The two types of cells include: