Normocytic Anemia: Hereditary Spherocytosis | Online Medical Library
Are you more of a visual learner? Check out our online video lectures and start your hematology course now for free! 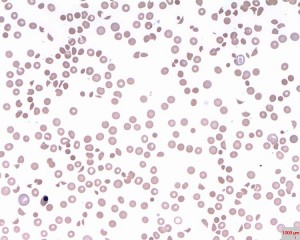 In most cases, hereditary spherocytosis is a disease of the red blood cells. The disease has an autosomal dominant inheritance pattern, and is associated with morphological changes in the erythrocytes, resulting in the formation of spherocytes.

With a prevalence of 1:3,000, hereditary spherocytosis is the most frequent cause of inherited hemolytic anemia in Central Europe.

Etiology and Pathogenesis of Hereditary Spherocytosis

Generally, hereditary spherocytic anemia is inherited in an autosomal dominant manner. The disease is attributed to membrane defects or lack of specific structural proteins in the cytoskeleton (ankyrin, spektrin, and pallidin). The impaired cell stability results in the loss of typical biconcave shape of the erythrocytes, which are replaced by spherocytes instead.

Due to its shape and morphology, the spherocyte has a negative effect on the microcirculation and is prematurely stuck in the spleen for degradation. Deformed red blood cells are cleared in the spleen (extravascular hemolysis) resulting in hemolytic anemia and splenomegaly.

N.B. Mutations occur in genes coding for RBC membrane proteins, especially spectrin, which maintain the integrity of the cell membranes. Loss of membrane fragments leads to spherocyte formation, rather than the normal biconcave RBCs. The deformed RBCs are phagocytosed in the spleen (extravascular hemolysis) resulting in anemia. 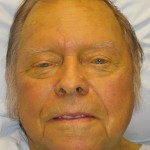 Spherocytic anemia can manifest clinically at any age. The clinical manifestations of spherocytosis are similar to other forms of anemia. It is characterized by recurrent jaundice and enlarged spleen (splenomegaly) in addition to the development of pigmented gallstones. 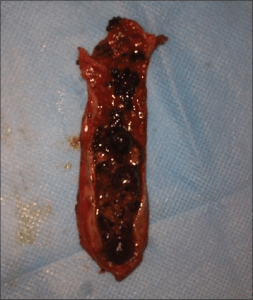 A positive family history provides the first diagnostic clue to hereditary spherocytosis. Further, microspherocytes with a small diameter are visible in the blood smear. The proportion of reticulocytes in the blood count is usually between 5% and 20%. The findings can be confirmed by testing the osmotic fragility of the erythrocytes, which show a shift to the right side of the control in patients with spherocytosis. To exclude autoimmune disease as the cause of hemolysis, a Coomb’s test should also be performed to screen for antibodies on the surface of the RBCs. Since there is no autoimmunity involved in spherocytosis, the Coomb’s test will be negative.

The first-line therapy for hereditary spherocytosis is splenectomy or surgical removal of the spleen. Following splenectomy, the hemoglobin level usually normalizes since the number of degraded erythrocytes is markedly decreased. However, splenectomy is only indicated if the patient’s condition worsens, as the removal of spleen increases the risk of infectious disease and sepsis.

Splenectomy is absolutely contraindicated in children below the age of 6 years due to the risk of infections. Alternatively, a subtotal splenectomy may be performed. In any case, vaccination against pneumococci, meningococci, and Hemophilus influenzae should be administered before splenectomy!

Frequent complications of spherocytosis are gallstone colics due to pigmented gallstones. Also, hemolytic and vaso-occlusive crises can occur, resulting in infarction.