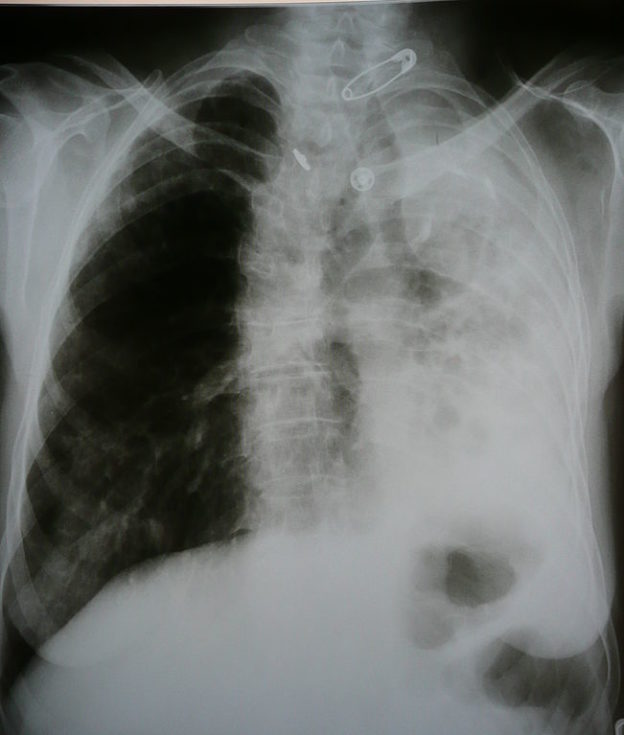 Several conditions can cause a complete white-out of half of the chest cavity on the chest x-ray which all share one feature, i.e. the loss of lung volume on the affected side. These conditions include pneumonectomy, total lung atelectasis in the postoperative period, pulmonary agenesis and pulmonary aplasia.

The complete removal of one lung causes a complete white-out of that hemithorax on plain radiography imaging. The trachea will be pulled to the side of the removed lung. If surgical clips were used at the time of surgery, they might be visualized at the lung hilum on the x-ray.

A chest radiograph will reveal a complete white-out of the hemithorax of the collapsed lung with the trachea and mediastinum shifted towards the collapsed lung. The other lung might show compensatory overinflation.

A computed tomography scan of the chest can reveal the extent of the collapsed lung parenchyma and might also reveal the obstructing lesion, i.e. tumor versus foreign body for instance.

A chest plain radiography will reveal a complete hemithorax white-out on the ipsilateral side of pulmonary agenesis. The mediastinal structures, including the trachea, are expected to be pulled towards the affected side. The contralateral side will usually show signs of hyperinflation.

Causes of a complete white-out of a hemithorax that will result in a shift of the mediastinum to the contralateral side are expected to include an increased volume of the thoracic cavity of the affected side. Therefore, the most common causes of such an occurrence are massive pleural effusions, a huge pulmonary mass, and a large diaphragmatic hernia.

Plain radiographic imaging of the chest in the erect position will reveal a complete white-out of a hemithorax if the pleural effusion is massive. Patients with massive pleural effusions are expected to have a mediastinal shift away from the effusion. Patients who have a large effusion that resulted in a complete collapse of the ipsilateral lung might have the trachea and mediastinum pulled towards the affected side.

Huge tumors of the lung might cause a complete white-out of a hemithorax, especially if they compress the main bronchus and cause a complete collapse of the ipsilateral lung. Such tumors are usually cancerous.

Diaphragmatic hernias can be congenital or acquired. They are characterized by a defect in the diaphragm which results in the herniation of intra-abdominal organs such as the liver and the stomach into the thoracic cavity. When the hernia is huge, it can cause complete opacification of the ipsilateral hemithorax. History and physical examination and the presence of intestine in the chest cavity on the x-ray are usually sufficient to make the diagnosis. Huge diaphragmatic hernias are usually congenital, rather than acquired.

A Hemithorax White-Out with the Trachea Position Unchanged

Conditions that do not result in a significant decrease or increase in the volume of occupying tissue of a hemithorax might cause a complete white-out if severe enough of the affected side, but without any effect on the position of the trachea. In other words, the trachea and the other mediastinal structures will remain central in position. Consolidation due to pneumonia, pulmonary edema, chest wall masses, and pleural tumors are the most common examples of a complete white-out of a hemithorax with the trachea remaining central in position.

The filling of the alveoli with fluid causes opacification on the chest x-ray. This fluid can be pus from pneumonia, a transudate because of heart failure, cells from a bronchoalveolar carcinoma, or blood from a pulmonary hemorrhage or hematoma. Lobar pneumonia might cause significant consolidation and opacification of more than one lobe of the affected lung. If this is accompanied by a large pleural effusion, the whole hemithorax might appear white on the x-ray.

Very large chest wall tumors, known as Askin tumors, are part of the Ewing sarcoma family of tumors. These tumors might be massive enough to cause a complete opacification of the hemithorax on the affected side.

Mesothelioma can be large enough to obscure the lung tissue behind it. A chest x-ray can show an almost complete, or a complete white-out, of the affected side. Sometimes, the compressing tumor reduces the volume of the lung tissue. If this happens, the mediastinal structures, including the trachea, might be pulled towards the lesion.

Severe pulmonary edema due to congestive heart failure or acute respiratory distress syndrome due to any severe illness can cause a bilateral white-out of both sides of the thorax on the x-ray.