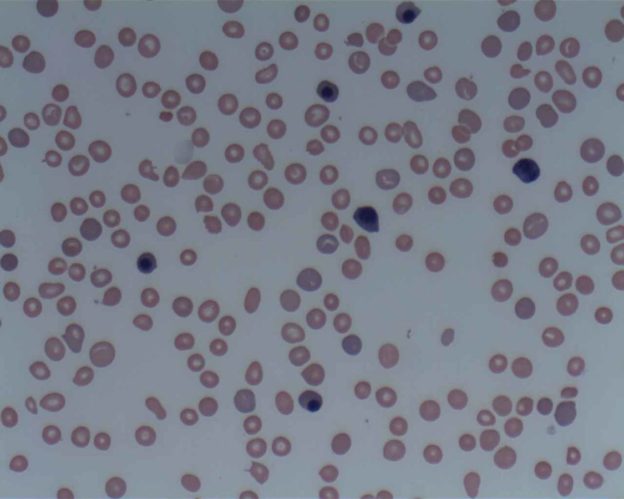 Image: “Nucleated red cells or normoblasts are immature red cells with a retained nucleus. They are usually found only in the circulating blood of the foetus and the newborn infant.” by Prof. Osaro Erhabor. License: CC0

Hematopoiesis is the production of all the blood cells including RBCs, WBCs, and platelets. Bone marrow is the major site of hematopoiesis. As the RBCs and platelets have a limited life span, they need to be replaced continuously. The pluripotent stem cell, also called the hematopoietic stem cell, is the main type of cell that differentiates into all the blood cell lines.

Hematopoietic stem cells (HSCs) are located in the medulla of the bone marrow. They have the ability to differentiate into all of the mature blood cell types and tissues. Along with differentiation, these cells also renew themselves.

As they proliferate, one of the daughter cells remains as HSC, which is a process referred to as asymmetric division. Other daughter cells include myeloid and lymphoid progenitor cells which follow the other differentiation pathways but cannot renew themselves. This is one of the main processes in the body.

Initially, blood formation occurs in clusters that are aggregated in the yolk sac, called the blood islands. In later stages, this process moves to the spleen, liver and lymph nodes. With the growth and development of bone marrow, the whole process is shifted to the marrow.

Still, the maturation, activation and some proliferation of the lymphoid cells occur in the spleen, thymus and lymph nodes later in life. In children, this process occurs in the long bones, such as the femur and tibia, while in adults it occurs in the pelvis, cranium, vertebrae, and sternum. In some cases, the extra-medullary sites also start the process of hematopoiesis at a later point in life. This process is called extra-medullary hematopoiesis.

Erythroid cells: These include red blood cells that carry oxygen. Premature RBCs (reticulocytes) and mature RBCs (erythrocytes) are released into the blood. The reticulocyte count is used clinically to estimate the rate of erythropoiesis in the body.

Lymphocytes: These are the major constituents of the body’s immune system. They have common lymphoid progenitors. The lymphoid lineage includes T-cells, B-cells and NK cells (natural killer cells), and their production is called lymphopoiesis.

Myelocytes: The myeloid progenitor cells differentiate further under the influence of cytokines and growth factors like CSF (colony-stimulating factors). These consist of granulocytes, megakaryocytes, and macrophages. They are derived from a common myeloid progenitor and play a major role in the process of innate immunity, adaptive immunity, and blood clotting. Production of these cells is called myelopoiesis.

Granulopoiesis (or granulocytopoiesis) is the differentiation or production of granulocytes.

Megakaryocytopoiesis is the production of megakaryocytes. 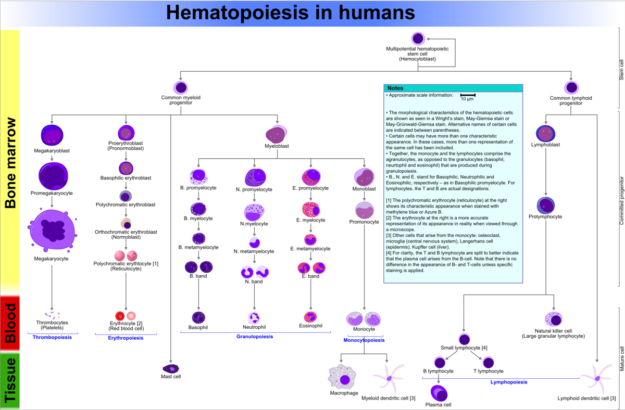 Image: “This diagram shows the hematopoiesis as it occurs in humans,” by A. Rad – Own work. License: CC BY-SA 3.0

The following stages of development occur within the bone marrow:

At this stage, the nucleus is expelled before the cell becomes a reticulocyte. These new precursor cells are released into the circulation and make about 1% of the total RBC count. After 1-2 days, reticulocytes are converted into erythrocytes. 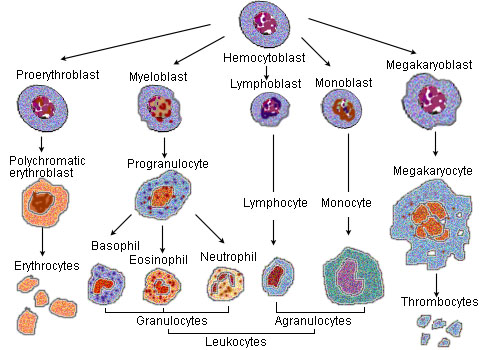 The main output of this process is a neutrophil. It starts with a myeloblast which differentiates into a neutrophilic promyelocyte. These promyelocytes are relatively larger cells with purple-staining azurophilic granules (this is why they are called granulocytes).

Bone marrow can get affected by various conditions, for example, malignancies, infections such as tuberculosis, exposure to harmful rays such as X-rays, and strong chemicals. These factors derange blood cell production in bone marrow. Many underlying causes need to be diagnosed accurately using a bone marrow biopsy.

Bone marrow biopsy is done by bone marrow aspiration under local or general anesthesia. Common sites for aspiration are iliac crest or sternum, in case of children it can be done from the upper part of the tibia.