Heart: Anatomy & Pathology and Components of the CVS | Lecturio 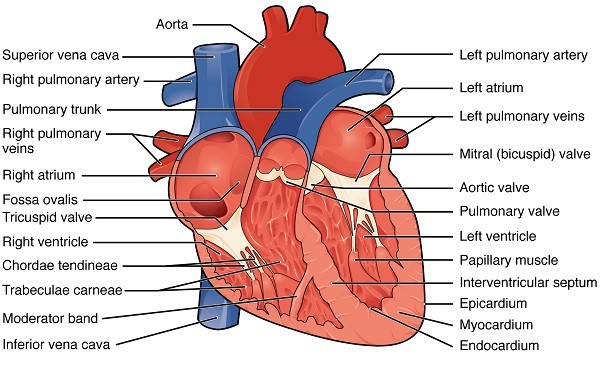 Picture: “Internal Structures of the Heart” by Phil Schatz. License: CC BY 4.0

The layers and blood vessels of the heart wall have the same basic structure. The layers of the heart, starting from the innermost layer, include the endocardium, myocardium, and epicardium. They correspond to the blood vessels tunica intima, tunica media, and tunica externa, respectively.

The endocardium is the inner layer of the heart, consisting of the following components: 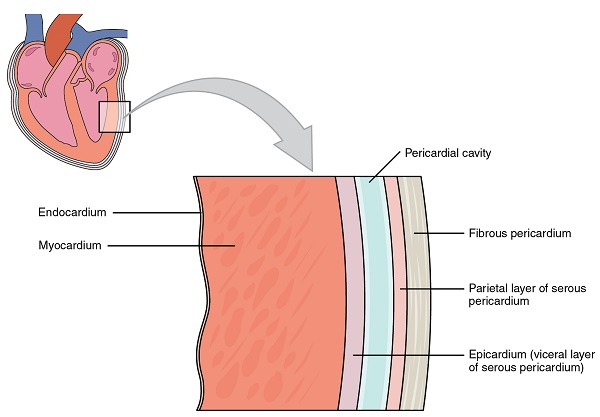 Image: “Pericardial Membranes and Layers of the Heart Wall” by Phil Schatz. License: CC BY 4.0

Structure of the heart valves

The heart valves exhibit the same general structure as the endocardium, with the addition of a specialized lamina propria, composed of dense collagenous connective tissue designed to withstand an especially high mechanical load. This specialized endocardium is also known as valvular endocardium, which has the following layers:

The stratum myoelasticum, the specialized tissue layer of the heart valves, is composed of fibrosa and spongiosa. The fibrosa is a layer of non-vascular, dense collagenous connective tissue. In the atrioventricular valves, the fibrosa is located on the side facing the ventricles, while in the semilunar valves, it is located on the side facing the arteries. The spongiosa is a layer of loose connective tissue. 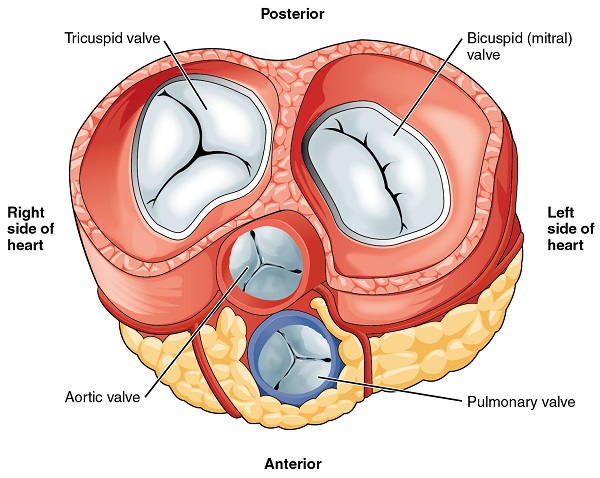 The cardiac skeleton is composed of dense collagenous connective tissue carrying the heart valves in a plane. The valves are anchored by the anuli fibrosi, four collagenous fibrous rings called:

These heart valves allow blood flow in only a single direction, or ‘valvular plane’ of the heart. The muscle tissue of the atria is almost completely insulated from that of the ventricles by the electrically non-conductive cardiac skeleton. The only structure that conducts impulses through the cardiac skeleton is the bundle of His, part of the specialized muscle cells of the impulse-forming system and the conducting system. The bundle of His ensures that the ventricles contract after the atria. The collagenous muscle tissue structure of the cardiac skeleton also acts as a firm base and source of the heart musculature.

This muscle layer is the thickest of the three heart wall layers. Its thickness is determined by mechanical load, and it is thinner in the atria than in the ventricles as well as thicker on the left side of the heart. It is composed of striated cardiac muscle tissue, which is similar in structure to striated skeletal muscle; however, a few key differences are present.

What are the key differences between cardiac and skeletal striated muscle? 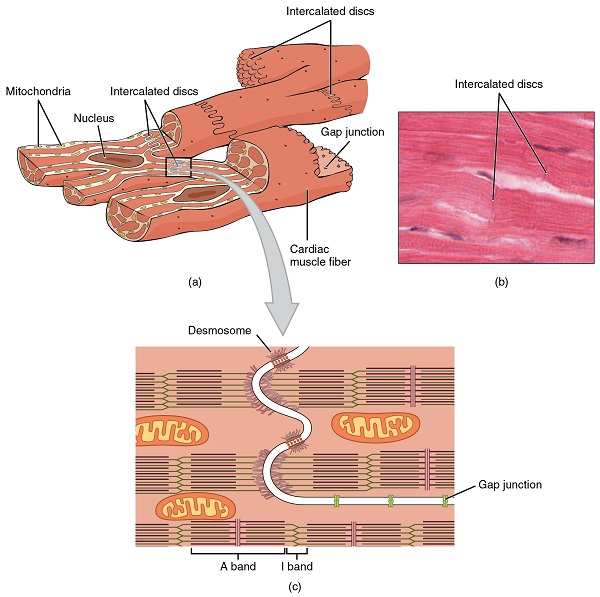 Cardiac muscle cells have a basal lamina and a surrounding network of capillaries to support their high metabolic rate. The sarcoplasmic reticulum is less developed in cardiac muscle than in skeletal muscle. In the cardiac sarcoplasmic reticulum, the transverse tubules of the sarcolemma (i.e. the T-system) are located next to the Z-lines and form the primary calcium reservoir; the longitudinal system (the L-system) is less pronounced. The T-tubules and L-tubules form a dyad. The higher metabolic demands of the cardiac muscle cells result in a smaller diameter and larger quantities of sarcoplasm and mitochondria.

The heart is a specialized organ in the cardiovascular system, whose function is to pump blood throughout the body via contraction of cardiomyocytes. There are two types of cardiomyocytes: the cells of the working musculature and the pacemaker cells that initiate and conduct electrical impulses, as well as function as myoendocrine cells to regulate circulatory function.

Function: contraction of the cardiac muscle

The three layers of the cardiac working musculature are oriented in a corkscrew fashion in relation to each other. The external longitudinal layer runs from the cardiac skeleton to the Vortex cordis. The middle layer is composed of circular fiber bundles and is especially thick in the left ventricle in order to support a greater pumping force. The inner layer is composed of fibers that radiate from this circular layer and includes the trabeculae carneae and the musculi papillares.

If the pumping action of the heart is weakened due to a pre-existing condition (e.g., valve defects, heart attack), blood may be retained within a portion of the circulatory system. Depending on the location, cardiac insufficiency is defined as right, left, or global cardiac insufficiency. Each of these has specific consequences:

Specialized cells of the cardiac musculature

Pacemaker cells initiate and conduct electrical impulses in the heart.

Function: the spontaneous, rhythmic initiation and conduction of electrical impulses. 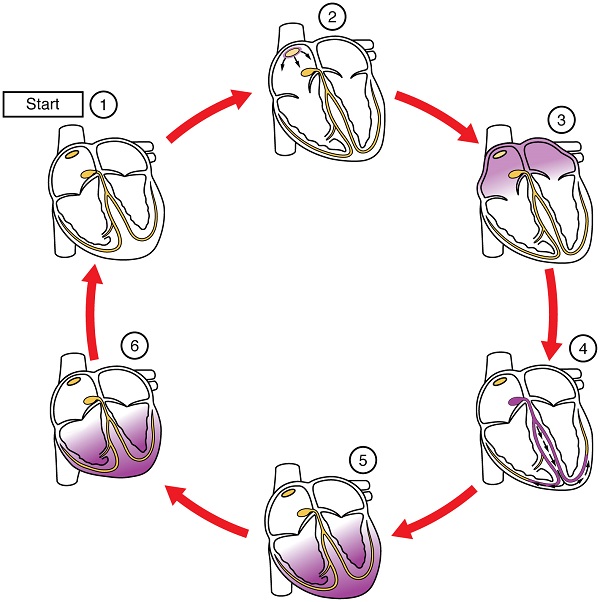 The cardiac conduction system has several components: the sinoatrial node, the atrioventricular node, the bundle of His, the bundle branch block, and the Purkinje fibers. The pacemaker runs from the right atrium, down through the ventricular septum to the cardiac apex, and crosses the cardiac skeleton, which separates the atrial and ventricular musculature.

The pacemaker components are arranged hierarchically. The sinoatrial node is the primary pacemaker with the highest characteristic frequency. If it malfunctions, the atrioventricular node, situated downstream, can use its lower characteristic frequency to act as the primary pacemaker. Pacemaker cells contain a high quantity of glycogen and few myofibrils, and are larger than the cells of the working musculature. 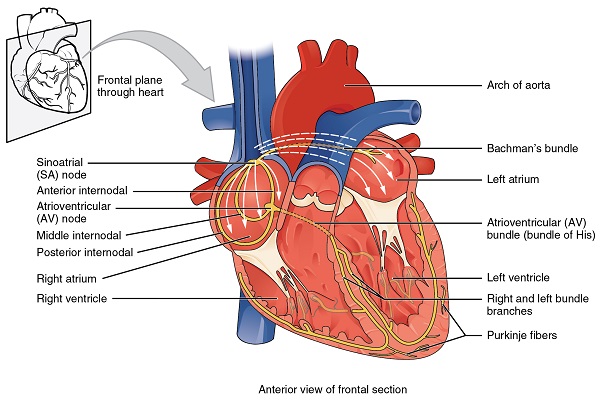 Image: “Conduction System of the Heart” by Phil Schatz. License: CC BY 4.0

ANP, otherwise known as cardiodilatin, is secreted in the cardiac cells of the atrial auricles. This peptide hormone prevents cardiac overload via two mechanisms:

Secretion of ANP is stimulated by increased stretching of the right atrium (e.g., due to cardiac insufficiency) or when activated by the sympathetic nervous system.

BNP is produced by cardiomyocytes in the ventricles. Secretion of BNP is stimulated mainly by increased ventricular stretching (e.g., due to cardiac insufficiency). BNP and ANP exhibit antifibrotic and antihypertrophic effects on the heart.

Cardiac muscle hypertrophy refers to an increase in cardiac muscle mass. It is caused by enlarged cardiomyocytes as a reaction to chronic overload, either physiologically (e.g., additional loading is the desired outcome of high performance sport or exercise), or pathologically, by increased ventricular pressure or volume load.

The epicardium is the visceral lobe of the pericardium serosum that firmly adheres to the heart, forming part of the pericardial sac. Similar to all other serous membranes, it is composed of:

Both the outer and inner surfaces of the heart are low friction and elastic, perfectly suited to withstand the high mechanical load on an active heart.

The pericardium is the connective tissue surrounding the heart. It has two components:

The richly vascularised tela subpericardialis is situated between these layers.

Both lobes merge at a reflecting fold to form the cavitas pericardiaca, or pericardial cavity. This capillary-rich space is filled with a few milliliters of serous fluid, an ultrafiltrate derived from the blood, which facilitates low-friction sliding movements of the organs.

The reflecting folds of the serous lobes (mesocardiacum) form the following sinuses:

In addition, the heart is attached to its surroundings via the following structures:

Components of the cardiovascular system (CVS) 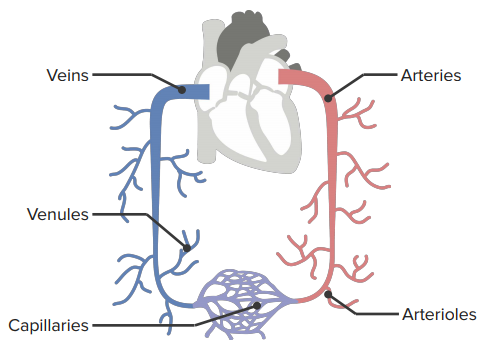 Diseases of the Heart

Pericardial effusion is defined as the accumulation of fluid in the pericardium. This condition can have a variety of causes:

Effusion caused by a viral infection

Pericardial effusion leads to increased pressure on the pericardial cavity and afferent veins, causing incomplete filling of the heart during diastole. Decreased blood ejection during systole lowers the blood pressure and results in shock.

Causes of infection of the pericardial sac include: 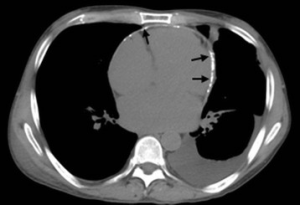 Image: “Chylous ascites and chylothorax due to constrictive pericarditis in a patient infected with HIV: a case report” by Summachiwakij S, Tungsubutra W, Koomanachai P, Charoenratanakul S. License: CC BY 2.0

Pericarditis calcarea is caused by recurring inflammation of the pericardium, which leads to tissue scarring and calcification, preventing flexible and low-friction gliding of the pericardial lobes. The heart can no longer completely dilate during the filling phase, causing venous blood retention and resulting in visible internal and external symptoms. Pericarditis calcarea may also lead to secondary diseases warranting surgical intervention.

Willius, F. A., & Keys, T. E. (1961). Classics of cardiology: A collection of classic works on the heart and circulation with comprehensive biographic accounts of the authors. New York: H. Schuman.