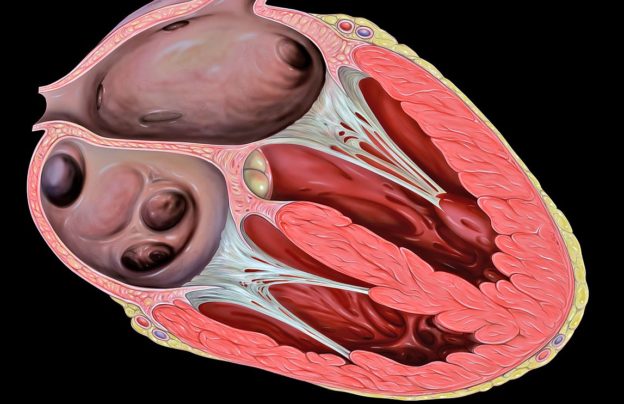 The tricuspid valve separates the right atrium and right ventricle, while the mitral valve separates the left atrium and ventricle. The valves are attached to the chordae tendineae, which are elastic tendons that open the valve during atrial systole/ventricular diastole and close the valve during ventricular systole preventing regurgitation of blood.

The superior vena cava is a large vein, which directs oxygen-poor blood from the upper arms, and head-neck region to the right atrium. The merger of the brachiocephalic veins posterior to the meeting point of the 1st costal cartilage and the sternum leads to the formation of the superior vena cava.

The 2 brachiocephalic veins themselves are formed when the internal jugular and subclavian veins merge. The thoracic duct drains into the left subclavian vein on the left side of the body. The superior vena cava also recirculates lymph.

The inferior vena cava is a large vein that directs oxygen-poor blood from the lower limbs, pelvis, and torso to the right atrium. It is formed when the right and the left common iliac veins merge at the L5 vertebral level.

The ascending aorta is 5 cm (2 in) in length and travels in the pericardial sheath along with the pulmonary trunk. It has the right and left aortic dilatations or sinuses near the aortic valve. These give rise to the right and left coronary arteries.

The 2nd sternocostal joint is the landmark where the ascending aorta continues as the aortic arch, which then travels posterosuperiorly and then inferiorly. Subsequently, it descends in the posterior mediastinum on the left side of the midline. At the T4 vertebral level, the aortic arch becomes the thoracic aorta.

Dissection of the aorta refers to a separation of the layers of the intima and media of the aortic wall. This causes an abnormal flow of blood through 2 parallel channels with thinning of the vessel walls. It can subsequently result in the formation of an aneurysm.