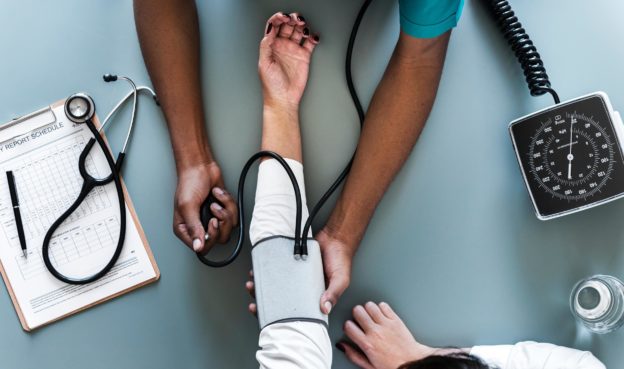 Disease models are characterized by commonly accepted views of disease, with partitioning into different disease groups (think of the various medical specialties). The perception and organization of actions in daily clinical practice are structured by disease models. The doctor focuses on the dysfunction or defect within the patient using problem-solving techniques. The medical history of the patient, physical examination, and diagnostic tests are used to identify and treat diseases.

Human behavior mainly depends on learning and thinking processes, even when a person feels uncomfortable and sick. In behavioral analysis, 5 condition dimensions are considered that can explain many human behavioral patterns.

The SORKC model: behavior-analytic model according to Kanfer (1976)

It is important to determine where a symptom comes from and its purpose. Of particular importance are the amplifiers that maintain a symptom and can contribute to its chronification. This knowledge aims to create a difference between voluntary and involuntary behavior. The following types of learning work together:

In behavioral medicine, relationships between disorders, behavior, and environment are analyzed in an interdisciplinary manner. For example, medical treatment goals can be reached by means that modify the behavior through patient training and biofeedback.

Practice tip: The psychological and pedagogical contents and the training with regard to giving advice, educating and changing behavior patterns in patients, unfortunately, do not get enough attention during medical studies. The only ‘patient’ that is seen during preclinical studies in classically structured courses is the cadaver in the dissecting room. Thus, practical nursing training should not be considered a necessary evil during lecture-free periods as prolonged patient contact can be useful. Later on, the student will be able to observe, learn, and communicate as much without time pressure and responsibility. 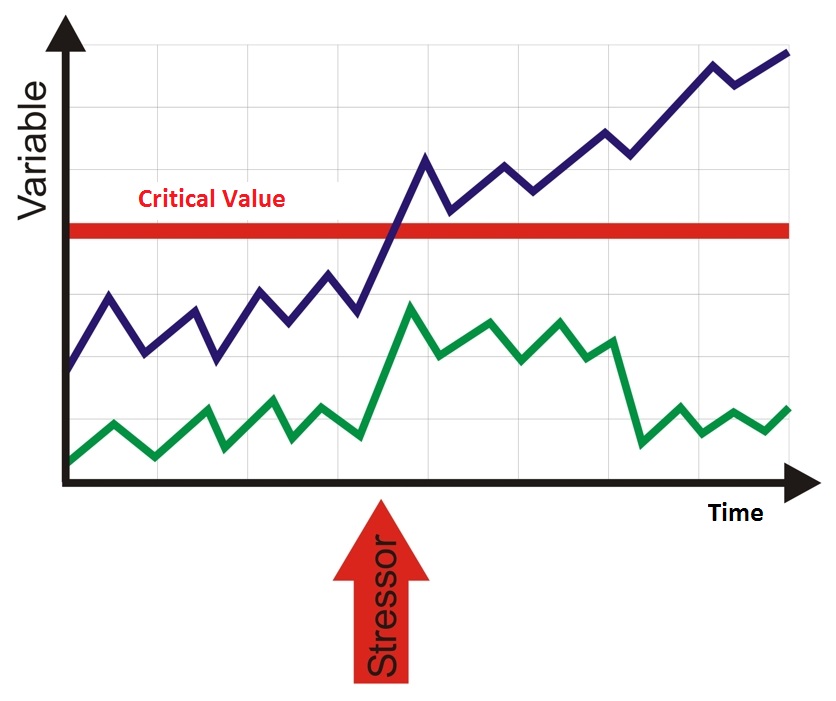 The definition of disease in the biological model is the disturbance of homeostasis due to changes in an organism/body. However, not all diseases develop because of biological factors alone. Based on 3 main influences, a bio-psycho-social disease model is currently suggested. For the development and maintenance of a disease, subliminal stimuli also have to be taken into account. Subliminal perception processes are below the threshold of conscious perception.

In conjunction with emotion, stress, and disease, the following terms should be memorized: 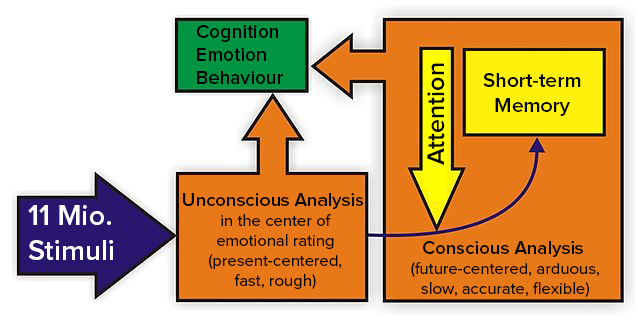 A ‘good’ amount of stress can have positive effects, i.e., new career challenges can cause eustress. Distress could occur if somebody constantly has high-stress levels (i.e. as a result of burnout). Internal and external stimuli (perceived very differently individually) are called stressors and the physical response to stressors is the stress reaction with amplified sympathetic activation. 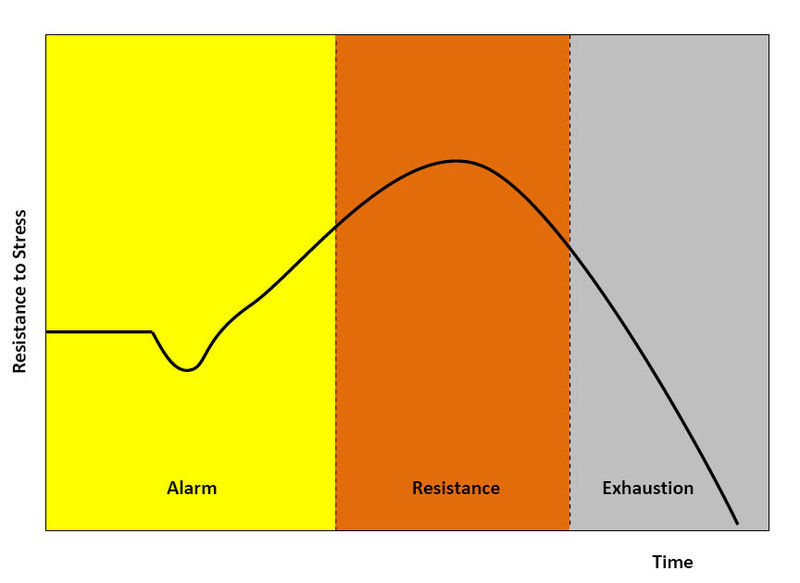 In psychodynamics, the following is basically assumed: the human being is mainly directed by desires, impulses, and motives that are not accessible by one’s consciousness. The psychodynamic model considers these unconscious conflicts as the cause for the development of disease. This model is based on the theory of Sigmund Freud’s psychoanalysis.

The model focuses on human functioning based on the interaction of forces as well as the drive within a person.

Assumption of the model:

The assumption in this model is that:

Structure of the human personality

Structure of the human psyche

According to Freud, the human psyche is divided into 3 parts: id, ego, and superego. The complex interaction between these 3 qualities is called the psychodynamic.
Id: The id has a physiological origin and exists from birth. It provides the energy for the immediate satisfaction of needs according to the ‘pleasure principle’: food, water, excretion, warmth, attention, and sexuality. The main drivers are Eros—the life-integrating force, especially libido, and Thanatos—the death wish. These drivers or instinctual demands are called the primary process. 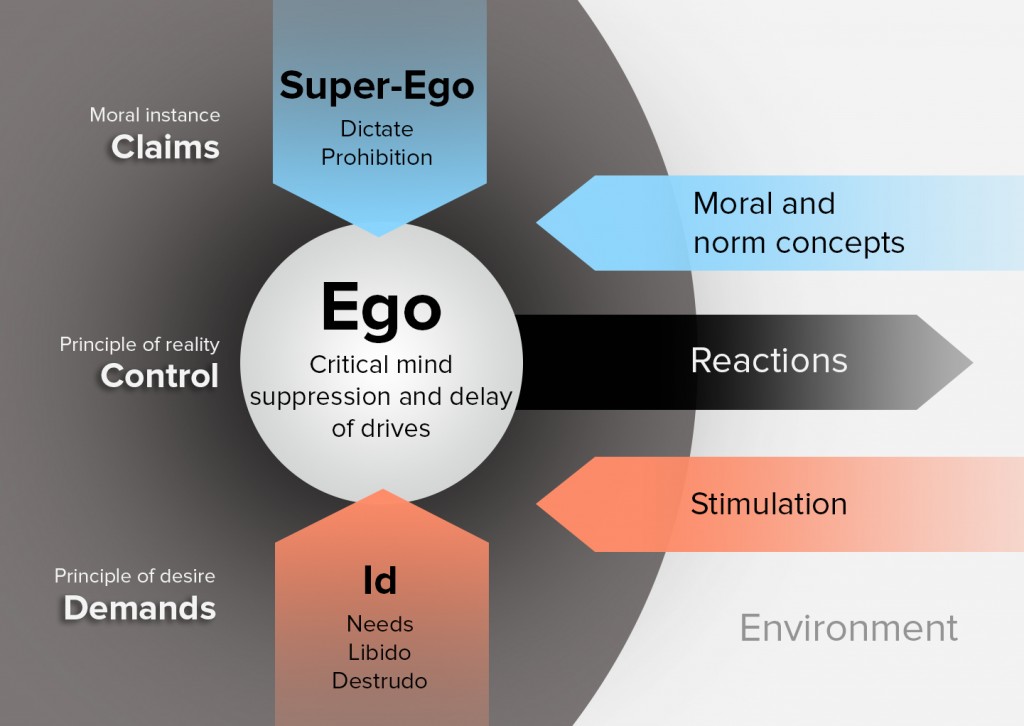 Image: Model of the psychic apparatus according to Freud. By: Rainer Zenz. License: CC BY-SA 3.0

Ego: The ego develops from the id in the second half of the first year of life. The satisfaction of drivers is postponed by the ego in a secondary process (planning and decision-making) and is thus regulated. Therefore, the ego provides its strengths to the accepted impulse: the ‘reality principle’.

Superego: The superego bears the moral rules of society – the ‘conscience’.

Defense Mechanisms against Fear in Psychoanalysis: Immune System of the Psyche

The id, ego, and superego are almost in constant contact with each other and thus inevitably create fear. For example, impulses of the id are often experienced as foreign or threatening and the ego attempts to repress them. The ego subconsciously creates defense mechanisms against this fear.

Tip: The terms regarding defense mechanisms against fear are very important for exams. Thus, they should be memorized and repeated often. In order to facilitate understanding and increase memorization, clear examples of each term should be retained.

The psychosocial influences on health and disease are characterized by social norms, roles, and attitudes. Attitudes characterize the position of every person and affect their behavior in addition to emotions and concrete situational triggers. These attitudes are not fixed but are rather subjected to constant changes through experiences.

Attitudes are gained through socialization and experiences and can develop into a very selective perception. This can result in the development of stereotypes with preconceived and generalized attitudes within one’s group (autostereotypes) or another group (heterostereotypes).

Our opinions with regard to the same object can be very contradictory. This exciting state is described as cognitive dissonance by Festinger who believes that we choose experiences and adjust or filter our opinions accordingly in order to minimize or eliminate stress.

For example, a diabetic who thinks of his 85-year-old grandfather with diabetes, instead of the effects of polyneuropathy like toe necrosis and retinopathy.

Control attributions: Me or fate?

Overall, internal attribution is considered more favorably than external attribution—how a person can influence one’s health and/or prevent disease instead of believing in fate when disease occurs. Therefore, trusting in oneself is considered important for health maintenance and is referred to as self-efficacy expectation.

An additional psychological protection factor is optimism. Optimists attribute externally in cases of failure (”The test was that difficult, I had to fail.’) while they attribute internally in cases of success (‘Thanks to my optimal preparation, I passed the exam very well’) and consider problems as challenges.

Social isolation can represent a vicious circle as a simultaneous cause or consequence of disease, i.e. depression in an individual. Another important factor is role loss, i.e. the end of a relationship or unemployment. This loss of stabilizing roles can lead to substance abuse or depression.

Social support is not only one of the most important protective factors for positively influencing the progression of disease but it is also highly preventive. Individuals, who are socially well integrated into an environment that provides social backing, support, and appreciation, have a ‘buffer’ against stress and associated diseases.

Sociological models describe factors and structures that determine our behavior in numerous fields, even in handling health and disease. These behavior-determining structures include: