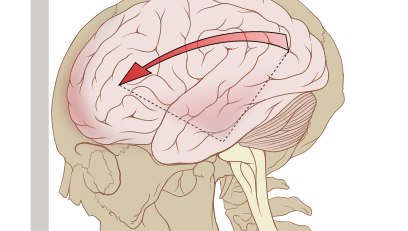 Head trauma includes a wide spectrum of injuries to the head, including bones, brain, meninges and intracranial vascular structures. But mostly, the term head trauma is a synonym for traumatic brain injury (TBI).

Increased intracranial pressure is every rise above the threshold of 20 mm Hg independently of the reason.

Head trauma can be divided:

By the clinical presentation:

By type of injury:

By the time of presentation:

Primary: Occurs at the moment of injury, and could be of pure mechanical nature ( object passing through brain tissue and meninges and causing direct trauma), and brain hitting the bone on/opposite to the impact site such as coup and counter-coup lesion; or acceleration-deceleration injury when unrestricted movement of head leads to strains and causes hematomas, vascular or stalk injury.

Secondary: Injuries that occur hours/days/weeks after trauma, and are not a consequence of direct trauma, but are considered to be consequence of impaired cerebral blood flow (CBF), resulting in local of diffuse brain edema, hemorrhage or increased intracranial pressure(ICP) complicated by electrolyte disbalance potentially resulting in neuronal and/or patient’s death.

The term mild traumatic brain injury was considered as too vague by the most recent NICE guidelines. Accordingly, a new term “minor head injury” was presented. Patients with a minor head injury can be classified into those who have lost consciousness for a period that is less than 10 minutes and those who have never lost consciousness after sustaining a blunt head trauma.

Moreover, if the patient returned to the emergency department after being discharged home with the diagnosis of a minor head injury for any reason, the treating physician should start the process of excluding a significant cerebral injury. A computed tomography scan is the gold-standard in excluding a significant cerebral injury in these scenarios.

Epidural hematoma is, potentially rapidly expanding blood collection between the bone and dura mater originating from meningeal arteries. It is a life-threatening condition that usually requires a surgical procedure.

Subdural hematoma is blood collection between the dura and the arachnoid membrane that originates from injured bridging veins. It can be both acute and chronic, and requires prompt, usually surgical care.

Intraparenchymal contusion (areas of swollen and damaged brain tissue) and hematomas can occur on the contact site (coup lesions), as well as on contralateral site (known as countercoup lesion).

Diffuse axonal injury (DAI) is one of the most important pathologic features of brain trauma. Microscopic damage of the brain tissue, resulting from the rotational acceleration of the brain and subsequent unrestricted head movement, is complicated to recognize both on clinical exam and on imaging studies (MRI is gold standard for recognition of DAI).

Following Monro-Kellie doctrine it’s known that the adult skull, because the sutures and fontanels are closed, is a rigid nonexpendable vault. Its volume remains constant regardless of the proportion of individual constituents, presented as cerebral parenchyma (80 %), cerebrospinal fluid (CSF) (10 %) and blood (10 %). Also, the rise of volume in one compartment raises intracranial pressure.

ICP is the pressure inside the cranial vault, with a physiological range between 10-20 mmHg in adults and 3-7 mmHg in children.

ICP depends on the brain, CSF and cerebral blood interaction. It depends gravely on CSF production volume, system resistance to reabsorption of CSF and venous pressure in superior sagittal sinus.

ICP is regulated in few stages:

CPP is calculated as a result of subtraction of mean arterial pressure (MAP) and intracranial pressure (ICP) values.

“Why does ICP occur. MONRO-KELLIE Doctrine” Image created by Lecturio

Cerebral blood flow (CBF) is represented by 15 % to 25 % of the cardiac output, and approximately 40 to 50 mL/100g of brain tissue/min. But blood flow volume isn’t the only thing that regulates oxygen supply to the brain. Oxygen supply is inadequate in cases of underlying anemia and hypoxia.

Vasodilatation or vasoconstriction are mechanisms that ease the cerebral autoregulation function in order to maintain CBF at an appropriate level and fulfill the brain’s metabolic oxygen requirements.

Knowing that head trauma may present itself in a very wide spectrum of clinical scenarios, and always having in mind that minor injury appearing patients may be the ones with rapidly fatal outcome, one must very seriously and carefully evaluate every trauma patient.

Signs and symptoms are nonspecific; primary estimation is roughly based on Glasgow Coma Score that constitutes of measured motor response, verbal response and eye-opening response with the following values:

The final score is made by adding the values of 1, 2 and 3, and the sum has the following meaning:

Also known as concussion, this is the most frequent form of TBI and often missed at initial examination. It constitutes of brief change in mental status namely confusion, disorientation, short loss of memory and/or loss of consciousness for less than 30 minutes.

There are some common, but unspecific symptoms such as headaches, fatigue, poor attention/concentration, irritability-emotional disturbances, and also nausea, loss of smell, mood changes, getting confused.

The potential problem makes the fact that symptoms may not, and often are not, present right after injury, taking days and weeks to develop. In older individuals, slow-growing subdural hematoma with confusion, memory loss and subtle balance disorders is the most overlooked trauma sequel that can lead to a range of serious outcomes, fatal end included.

This is a serious medical condition presenting as a spectrum of cognitive function disorders such as longstanding or irreversible loss of memory, loss of consciousness for more than 30 minutes; motor function disorders such as extremity weakness, impaired coordination and balance; sensation disorders namely hearing, vision, impaired perception and touch; and very often emotion alterations like depression, anxiety, aggression, loss of impulse control, personality changes.

Clinical staging and diagnosis consist of detailed neurological examination and use of various trauma score charts (GSC is a common option, but there are many other systems); brain imaging is indispensable, routinely in first line CT scan.

In a non-acute setting, cognitive evaluation done by a neuropsychologist is essential, and depending on the patients’ needs, physical, occupational and speech therapy should address specific deficits.

Due to diverse signs and symptoms, and in scenarios of inadequate anamnesis, present TBI must be differentiated from the following:

Management of head trauma requires a multidisciplinary team. Depending on specific conditions and the severity of injury, outdoor clinic to ICU patient treatment may be necessary.

Hematomas, epidural and subdural, require surgical decompression depending on the neurological status and elevation of ICP.

Firstly, that includes elevation of the head of the bed to improve venous drainage; maintenance of PaO2 >100 mmHg and PaCO2 30-35 mmHg by adequate ventilation and oxygenation; use of the lowest possible AW pressures to avoid obstruction of venous drainage; keeping MAP at pre-intubation level.

Sedation by decreasing anxiety, fear and response to pain block the increase of ICP. Steroids should be avoided in the treatment of cytotoxic cerebral edema which is the type of cerebral edema you see in a patient with traumatic brain injury. Steroids should be also avoided in patients with cerebral edema due to ischemic stroke and hemorrhagic stroke. In fact, steroids might be associated with a higher rate of complication in patients with traumatic brain injury.

Other complications of traumatic brain injury include:

Guidelines for the Management of Severe Traumatic Brain Injury, Fourth Edition, via www.braintrauma.org