Hemolytic Disease of the Newborn (HDN) — Causes and Symptoms 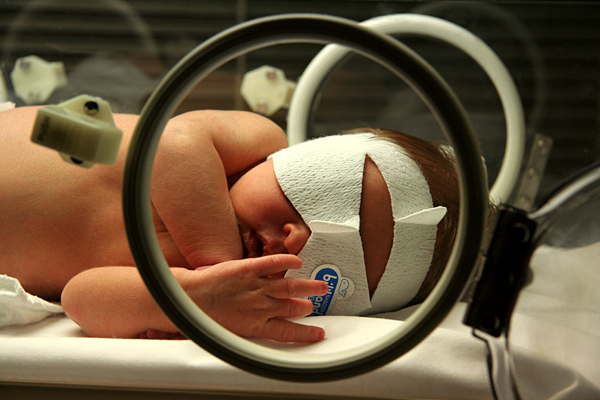 It is a hematologic disorder of the fetus/ neonate that arises from alloimmunization/isoimmunization of the mother following blood group incompatibility with the fetus.

Epidemiology and Etiology of Hemolytic Disease of the Newborn

Fetal hemolytic disease (FHD) is more common among Caucasians than African-American babies due to the higher incidence rates of Rhesus negative mothers.

In mothers who do not receive prophylaxis, the overall risk of isoimmunization for Rh+ve ABO compatible infant with an Rh-ve mother is 16%. With:

Rh factor incompatibility is reported commonly when the mother is Rh-negative while the fetus is Rh-positive. This incompatibility is due to several antigens, the D antigen being the chief culprit while other antigens like c, C, E, and e may also be responsible. The maternal immune system responds to these antigens by forming IgM antibodies during the first encounter and these IgM antibodies do not cross the placenta. However, subsequent exposure to the antigen triggers a release of IgG antibodies by the maternal immune system and these antibodies travel across the placenta to the fetal circulation, target the fetal RBCs causing lysis and FHD.

Clinical Presentation of Hemolytic Disease of the Newborn

The presentation can also be classified as mild, moderate, or severe FHD.

When the rate of RBC hemolysis is well tolerated by the fetus, the symptoms and signs of FHD are mild. In the neonatal period, clinical features of mild anemia and hyperbilirubinemia can be noted and they usually resolve without intervention.

When the rate of RBC hemolysis is moderate during pregnancy, the fetal bilirubin levels are low as the placenta continues to filter the bilirubin from the fetal circulation. However, after birth, the immature neonatal liver cannot metabolize the excessive amount of bilirubin leading to hyperbilirubinemia and accumulation of bilirubin in the plasma and tissues.

Excessive bilirubin accumulation in the brain results in a condition called kernicterus, which can be potentially fatal or can lead to neurological deficits if the baby survives.

When the rate of RBC hemolysis in utero is excessive, rapid, and prolonged, it leads to a constellation of problems that include:

The fetal liver and spleen overwork to compensate for the loss of the RBCs leading to hepatosplenomegaly, and later to hepatic dysfunction.

A baby born with FHD can present with

Diagnosis of Hemolytic Disease of the Newborn

As several conditions can mimic the presentation of FHD, the diagnosis depends on detecting Rh or AB0 incompatibility thus blood grouping should be done.

During pregnancy, the diagnosis is based on:

After delivery, diagnosis and management are based on fetal testing:

Treatment of Hemolytic Disease of the Newborn

Fetal anemia is monitored in cases where FHD is detected. In-utero blood transfusion may be required repeatedly to treat the anemia. The transfusion is done using O-ve, washed, leukocyte depleted and irradiated blood via the umbilical vein.

Prognosis and Prevention of Hemolytic Disease of the Newborn

Prognosis of FHD is variable as some babies with mild disease are asymptomatic, while severe hemolysis with fetal hydrops can lead to intra-uterine or neonatal fetal death unless detected and treated early.

FHD is a preventable disease. Counseling Rh-negative women, antenatal education and antenatal testing with indirect Coombs test play an important role in its prevention. An Rh-negative woman should be administered RhoGam around the 28th week of pregnancy, followed by a second dose within 72 hours of delivery if the baby is Rh-positive. However, if the baby is Rh-negative, then the second dose needs not to be administered.

Hemolytic disease of the newborn via medlineplus.gov

Hemolytic disease of the newborn via nih.gov

Hemolytic Disease of the Newborn via chop.edu

Hemolytic Disease of the Newborn via ucsfbenioffchildrens.org