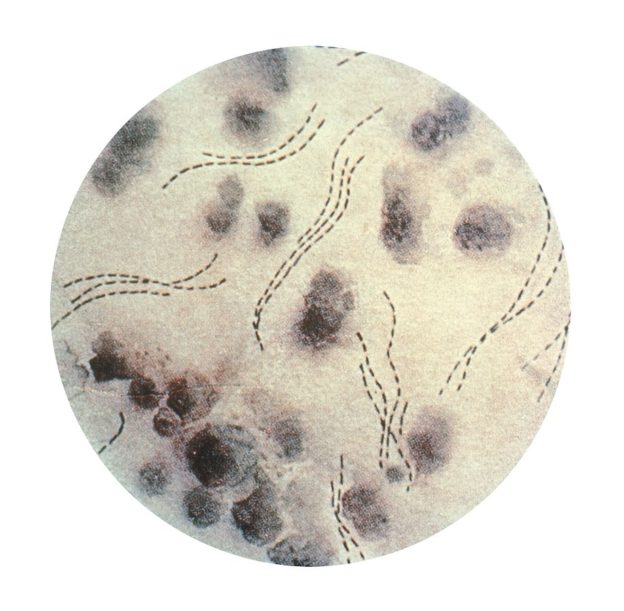 Haemophilus ducreyi is a highly infectious bacterium that is transmitted sexually when it gains tissue access via skin microabrasions and mucosal breaks that occur during sexual intercourse. It mainly affects the genital area and does not penetrate intact skin, although autoinoculation to nonsexual sites, such as the eye, has been reported. The mean incubation period is 5 to 7 days, with the range being 1 day to 2 weeks. H. ducreyi only affects humans and has no intermediate or secondary hosts.

After tissue invasion, the bacterium forms tender papules. These papules turn into pustules that rupture after 2 to 3 days and form uneven ulcers. A cytotoxin, cytolethal distending toxin (CDT), plays an important part in the formation of the ulcers.

Chancroid is not a life-threatening disease. Even if the ulcers are not treated in a timely manner, they typically resolve spontaneously within 3 months. In some cases, the ulcers may lead to complications, such as painful, suppurative lymphadenopathy.

The chronic use of antibiotics for the treatment of genital ulcers has led to the emergence of widespread resistant strains of H. ducreyi in developing countries.

Chancroid is an uncommon infection in most of the developed countries, including the United States. The Centers for Disease Control and Prevention has reported only six cases of chancroid in 2014 in the US, but the actual number of cases may be higher as many cases are not tested and not reported.

The highest incidence of chancroid is observed in young adult males 20–25 years of age with a male-to-female ratio of 1:3. The incidence is also higher in individuals with low socioeconomic status, poor hygiene, high-risk sexual behavior (e.g., prostitutes), and drug abuse.

Chancroid is endemic in many developing nations. It is a major cause of genital ulcer disease in sub-Saharan Africa, Southeast Asia, and Latin America although the exact figures are not available. There is a racial predominance; uncircumcised, non-white men are usually affected the most.

The first sign usually noted is an inflammatory papule surrounded by a region of erythema. Soon, a pustule is formed that ruptures to form a sharply circumscribed ulcer with indurated edges.

The common clinical presentation is extremely painful ulcer(s), almost always limited to the genital area and the inguinal lymph nodes, and often multiple in number. A typical chancroid ulcer is about 1 to 2 centimeters in diameter and has an erythematous base with gray or yellow purulent discharge. The ulcer margins are clearly demarcated, and the ulcers bleed when scraped.

One-half of patients with chancroid develop painful inguinal lymphadenopathy, usually unilateral. The involved lymph nodes may enlarge and present as fluctuating buboes with subsequent ulceration within 1 to 2 weeks. 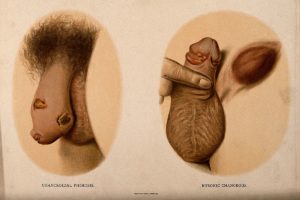 The patients with H. ducreyi ulcers may give a history of unprotected sex with multiple partners and prostitutes. Other signs may be:

Every patient with chancroid should be tested for HIV/AIDS and other common sexually transmitted diseases, such as syphilis, herpes simplex virus, gonorrhea, and chlamydia.

Antimicrobial therapy is the mainstay of treatment for chancroid and should be started as soon as the diagnosis is suspected. The following antibiotic regimens have been recommended by the Centers for Disease Control and Prevention (CDC):

Azithromycin and ceftriaxone have the advantage of increased compliance as they are administered as a single-dose regimen and they are also comparatively safe in pregnant women.

Needle aspiration and/or incision and drainage may be needed for the management of buboes.

Patients should avoid unprotected sexual intercourse during the course of treatment until the ulcers have resolved. Their sexual partners should also be treated irrespective of the symptoms.

Biology of Haemophilus ducreyi via asm.org

Chancroid and Haemophilus ducreyi via europepmc.org

UK National Guideline for the Management of Chancroid 2014 via bashh.org