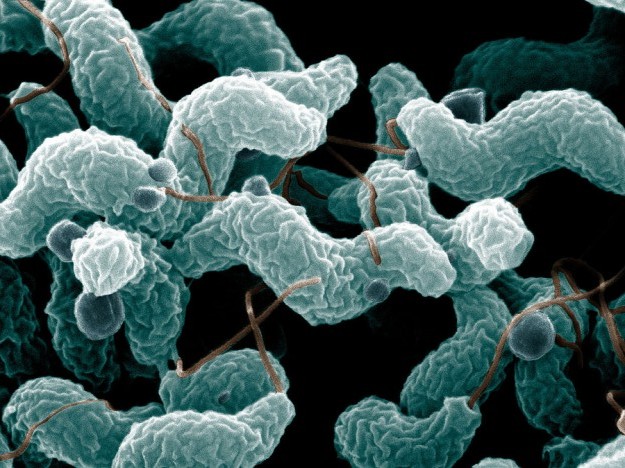 Definition of the Guillain-Barré Syndrome

Guillain-Barré syndrome (GBS) is a polyradiculoneuritis, which can have an acute or a subacute course. This condition usually occurs following an infection and is accompanied by multifocal demyelination and axonal lesions of the peripheral nerves. The most frequent form of GBS in Europe is acute inflammatory demyelinating polyneuropathy (AIDP), which occurs in 60–90% of cases. Within days or longer periods of up to 4 weeks, clinical manifestations of GBS reach their peak. 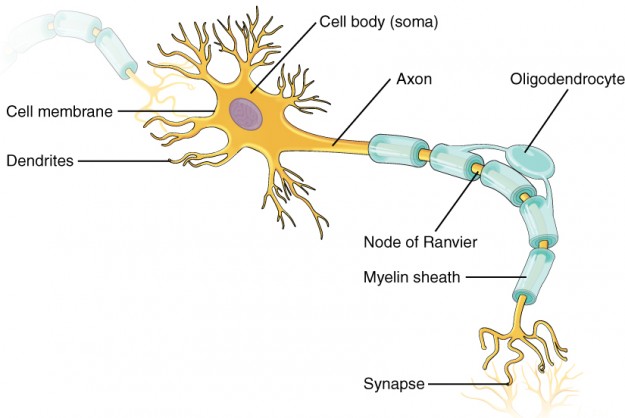 Epidemiology of the Guillain-Barré Syndrome

Incidence of the Guillain-Barré Syndrome

Note: In Europe, GBS is the most frequent form of acute peripheral symmetric paralysis (since poliomyelitis has almost completely disappeared).

The incidence of Guillain-Barré syndrome is 1–2 cases per 100,000. Throughout all age groups, men are more frequently affected than women. The incidence of GBS increases with age, and the peak of incidence is between the 20th and the 30th year of life.

Pathogenesis of the Guillain-Barré Syndrome 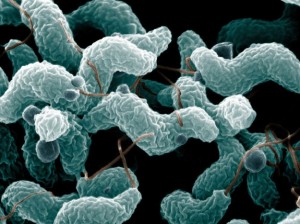 The onset of GBS typically is preceded by an infection, particularly respiratory infection with Mycoplasma pneumoniae, gastrointestinal infection with Campylobacter jejuni, or infection with cytomegalovirus, varicella-zoster virus, or Epstein-Barr virus.

The immune reaction to the infection, which is primarily aimed at the pathogen, also attacks the body’s own cells due to molecular mimicry. In this case, the myelin of the axonal membrane is affected. The molecular mimicry theory is best proven in the case of Campylobacter infection. However, the general pathogenesis of GBS has not been completely clarified.

Note: A history of infection is not necessarily present in patients with GBS.

Clinic of the Guillain-Barré Syndrome

Case Study of the Guillain-Barré Syndrome

Case study: A 35-year-old woman was prescribed the antibiotic roxithromycin to treat infection of the paranasal sinus accompanied by fever. Three days later, she developed quickly progressing weakness in all extremities and in the areas supplied by both rami of the facial nerve. She was then immediately transferred to the neurology department of a hospital. There, GBS was diagnosed. After initially unsuccessful treatment with immunoglobulins, she felt better after plasmapheresis. Still, a slight weakness of the facial rami remains.

Note: Clinical symptoms of GBS are a popular topic in medical exams. Attention: In exam questions, the IMPP often only refers to acute polyradiculoneuritis in order to make the question more difficult.

Cardinal symptom of GBS: Weakness of the extremities that starts distally, then ascends during the course of the disease. Mostly, the muscle weakness or paresis develops over several days. Development of paresis within hours or over weeks is not typical.

In severe cases of GBS, some patients with dysautonomia may need a temporary external pacemaker.

Diagnostics of the Guillain-Barré Syndrome 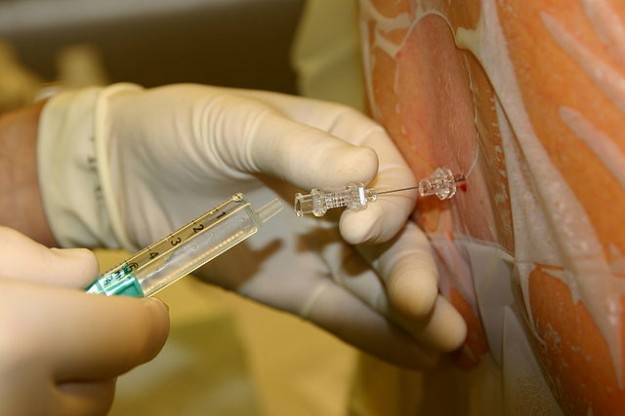 The most important diagnostic measure is lumbar puncture and cerebrospinal fluid (CSF) analysis: It shows massively increased protein concentration, while the white blood cell count is slightly increased or not increased at all. This phenomenon is referred to as albuminocytologic dissociation.

Note: The change in CSF can lag the clinical symptoms; thus, the protein concentration can be normal in the first week.

Determination of the presence of IgG and IgM antibodies against gangliosides GM1, GD1a, GD1b, and GQ1b, and Campylobacter and mycoplasma serologies are performed.

Typical signs of GBS in neurography are

Pathological spontaneous activity after 2–3 weeks as a sign of axonal participation.

Examination of the Vegetative Nervous System at GBS

Differential Diagnoses of the Guillain-Barré Syndrome

If these symptoms occur, one should consider spinal diseases like transverse myelitis, spinal masses, spinal ischemia, and viral and bacterial spinal infections.

Therapy of the Guillain-Barré Syndrome

The Guillain-Barré syndrome can be treated in both a symptomatic and a specific causal manner. General causal therapy is not possible. It is still not clear if an antibiotic or antiviral treatment against the generally treatable pathogens can positively influence the course of the disease via antigen elimination.

Because the autoimmune antibodies are the cause of the disease, one tries to wash them out or to contain them. Immunoglobulins are administered over a period of 5 days: 0.4 g/kg body weight/day. An alternative treatment is plasmapheresis to achieve daily elimination of the antibodies. This specific causal therapy is performed if walking distance and respiration are severely impaired. 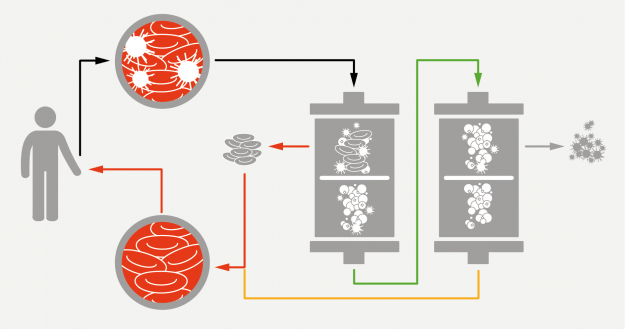 Plasmapheresis: The ‘blood wash’ is a technique that is used for the extracorporeal elimination of substances with great molecular weight, including immunoglobulins, immune complexes, cryoglobulins, and endotoxins. The goal is to eliminate the pathogenic agents and, thus, reverse the disease process. Besides its application in GBS, plasmapheresis is used for the treatment of thrombocytopenic purpura, myasthenia gravis, and Goodpasture syndrome.

As symptomatic therapy, thrombosis prophylaxis and pneumonia prophylaxis (regular expectorating, vibration massage of the thorax) are used. If vital capacity drops below 25% of the normal level, mechanical ventilation should be initiated. Bradycardia and AV blocks II and III can be treated with a temporary pacemaker. Glucocorticoids are considered ineffective in the treatment of classic GBS and are not recommended.

For analgesic treatment of neuropathic pain, anti-inflammatory agents, antidepressants, antiepileptics, and weak opioids can be used.

Note: Monitoring of respiration and cardiovascular function is necessary. Mechanical ventilation should be implemented prior to clinical decompensation. Paresthesia and pain also should be treated accordingly. Furthermore, physiotherapy (position, breathing therapy, movement) is necessary during the acute phase.

Course and Prognosis of the Guillain-Barré Syndrome

However, this chronologic sequence only represents the most frequent course of illness. Sometimes, patients with GBS must be treated in an intensive care unit for several months.

In approximately one-third of patients, the symptoms do not completely regress. In very severe, therapy-resistant cases, tetraplegia, and cranial nerve deficits can occur. GBS is fatal in about 3% of cases. If the course of GBS remains progressive for an extended period of time, CIDP must be considered.

Weakness of the mimic muscles in the face is also frequent. Sometimes, paresis of the extremities occurs.

In the CSF, an increase in protein may be observed. Anti-GQ1b antibodies are detected in 90% of cases.

Distinction Features of GBS and the Miller-Fisher Syndrome

Elsberg syndrome, or sacral radiculitis, is another variation of GBS. Elsberg syndrome also may occur after infections with herpes simplex, cytomegalovirus, or borrelia. Characteristic symptoms are:

Note: You should memorize the typical symptoms of the variations of GBS. This knowledge is important for considering and excluding them from the differential diagnosis.

Similar to GBS, the pathogenesis of CIDP is not completely clear. One assumes that humoral and cellular factors of the immune response play a role. Like GBS, the symptoms occur due to demyelination and remyelination of the greater fibers. However, axonal lesions leading to denervation are more frequent in CIDP.

As defined, CIDP develops over the course of 8 weeks. Progressive, distal and proximal, symmetric muscle weakness occurs and can even lead to the loss of muscular proprioceptive reflexes. Sensory disorders can also occur. The autonomic nervous system, which is severely affected in GBS, is less severely affected in CIDP.

Slowing down of nerve conductivity and decrease in the compound action potential in electromyography show both demyelinating and axonal participation. F-waves are decreased or absent. Just like in the case of GBS and Elsberg syndrome, the protein concentration in the CSF is increased.

Concerning therapy, there is a distinct difference from the treatment for acute GBS: Steroids are used for the treatment of CIDP. Steroids decrease the expression of pro-inflammatory cytokines and inhibit T-cell production. The initial dose is 100 mg prednisone (consider osteoporosis prophylaxis), which is gradually reduced in the course and replaced by permanent immunosuppression if necessary (with cyclophosphamide or cyclosporine A). Also, immune adsorption and immunoglobulins are used.

MMN is an asymmetric variation of CIDP. Here, only the motor fibers are affected. Clinically, asymmetric reflex deficits and muscle weakness are typical. Because motor neurons are affected, the occurrence of atrophies and fasciculations is possible (often, the motor part of the ulnar nerve is affected initially).

Therapeutically, the short-term administration of cyclophosphamides or immunoglobulins is reasonable.

Note: The distinction of MMN from amyotrophic lateral sclerosis (ALS) is particularly important because the latter condition is significantly less treatable than MMN. Typically, patients describe the beginning of weakness in one hand with slow spread of the symptoms to other muscle groups and the involvement of additional extremities. These initial symptoms are strikingly similar to those experienced by patients with an ALS diagnosis.