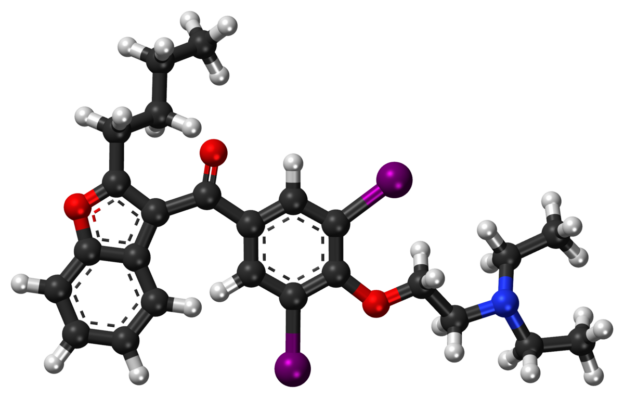 Antiarrhythmic drugs can be classified according to their mechanism of action. Therefore, the Vaughan-William classification lists five groups:

Class 1 constitutes the sodium channel blockers and is, in turn, divided into three groups (1A, 1B, and 1C), based on the action potential duration, the amount of reduction of the phase 0 slope, and effective refractory period.

Class 3 are potassium channel blockers – amiodarone, dronedarone, bretylium, sotalol, ibutilide, and dofetilide. These will be discussed in this article.

Calcium channel blockers are classified as class 4 and miscellaneous drugs are class 5. 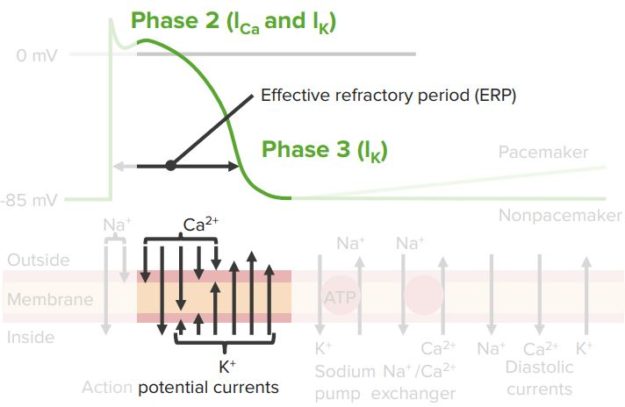 This group of drugs binds to the channel which is responsible for the potassium movement and blocks it (rapid component of the delayed rectifier current (IKr)). Once the blocking has happened, the refractory period increases. 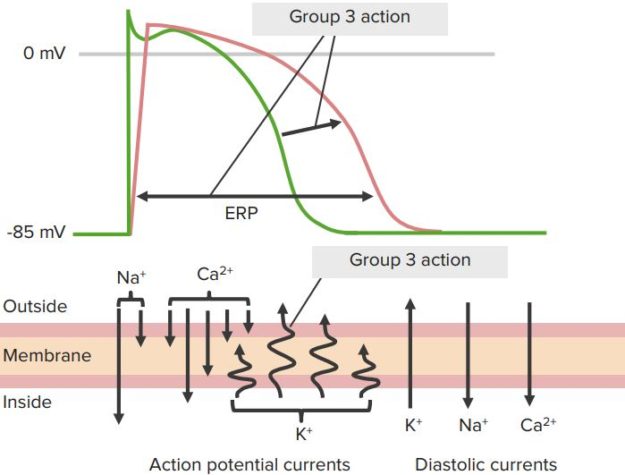 One of the important mechanisms which cause continuous tachyarrhythmia is the circuit of excitatory impulse which excites the ventricle again and again. Potassium channel blockers block these re-entry circuits by means of inhibition of the effect of the impulse by making the tissue refractory at the time the impulse arrives.

It is worth to note that amiodarone is said to have an electrophysiological property in addition to its potassium channel blocking property. It also acts as a sodium channel blocker, anti-adrenergic and L -type calcium channel blocker (note that these are the property of class 1, class 3 and class 4 drugs according to the Vaughan-Williams classification).

All these are the reasons behind the therapeutic efficacy of amiodarone.

Amiodarone has shown efficacy in the management of both supraventricular and ventricular arrhythmias, but its approved usage is limited by its long time of onset of action and its array of side effects.

Pros & Cons and the Main Indication of Amiodarone

Oral amiodarone is also used for the prevention of paroxysmal atrial fibrillation. Intravenous amiodarone is used mainly in severe cases and the indications include the maintenance of sinus rhythm in AF patients who are unstable hemodynamically.

Though convincing evidence is not available, amiodarone is used for the restoration of sinus rhythm in patients with unstable atrial fibrillation. Critically ill patients form the main treatment group (in this group of patients, ventricular fibrillation occurs along with atrial fibrillation contributing to the instability).

Given as a Prophylaxis

Amiodarone (both oral and intravenous) is used as prophylaxis before cardiac surgery in order to prevent atrial fibrillation in high-risk patients. The drug is also given to those patients who have a high risk of atrial fibrillation during electrical cardioversion. The treatment, in this case, should start long before (2-6 weeks before the planned cardioversion).

Oral amiodarone has shown efficacy in preventing the occurrence of VT in patients with myocardial infarction and congestive heart failure.

A recent RCT (2016) published in NEJM, where lidocaine, amiodarone, and placebo are compared for pulseless VT or VF in those patients in whom initial defibrillation or vasopressor therapy has shown refraction, has shown that there is no difference in survival (primary outcome of the trial).

There occurred a mild non-significant survival benefit on both the drug treatment groups when compared to the placebo in the bystander-witnessed arrest.

It has to be noted that the two most famous trials, namely the ALIVE trial and the ARREST trial, where amiodarone has been compared with lidocaine in sudden cardiac arrest patients having persistent VF after defibrillation, have shown the only improvement in the rate of hospital admissions after the arrest, but not survival. In the ARREST trial, amiodarone was associated with more side effects. Survival to hospital discharge and survival with favorable neurologic outcome, however, was not improved by amiodarone compared with placebo or amiodarone compared with lidocaine, although these studies were not powered for survival or favorable neurologic outcome.

Based on the above evidence, amiodarone is suggested by the AHA guidelines as the first-line drug for the treatment during sudden cardiac arrest, rather than lidocaine (this is also confirmed by a Cochrane study): ‘Amiodarone may be therefore considered for VF/pVT that is unresponsive to CPR, defibrillation, and a vasopressor therapy. (Class IIb, LOE B-R)”.

It should, however, be remembered that the first line of therapy to be given to a patient with VF or VT related sudden cardiac arrest is an effective CPR along with defibrillation if indicated.

Oral amiodarone is lipophilic and it takes time to attain the intended concentration in the blood (due to the increase in the volume of distribution seen with the lipophilic drugs).

Amiodarone is an inhibitor of CYP3A4, so the interaction concerned with the drugs which are metabolized by the CYP3A4 needs to be taken care of.

The drug also significantly interacts with warfarin, this requiring dose modification. In addition to this, the alteration in thyroid function caused by amiodarone further affects warfarin concentration.

Adverse and Side Effects Related to Amiodarone

Though amiodarone is almost a wonder drug in arrhythmias, it has gone into disfavor mainly because of its side effect profile. That’s the reason why it is used mainly in refractory ventricular arrhythmia, rather than atrial fibrillation, even if it has high efficacy in AF.

The side effects are mainly seen with long term therapy, rather than short term intravenous therapy.

The exposure to low-dose oral amiodarone for a long duration has the following odds of developing side effects when compared to placebo, namely 4.2%, 3.4%, 2.0% for thyroid, ocular and skin/neurological/pulmonary toxicity respectively. The above data is according to a meta-analysis on the side effect profile.

The side effect profile of intravenous amiodarone is different. The most common adverse effect with intravenous preparations is hypotension, and this is significantly reduced by the latest pharmaceutical preparation (containing aqueous base). 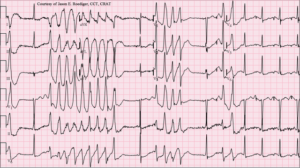 It should be noted that although amiodarone is more potent compared to other groups of antiarrhythmic agents, it has fewer pro-arrhythmic effects. When the arrhythmia occurs with amiodarone, the most commonly seen is the Torsades de pointes. The risk increases in women and with the presence of other co-electrolyte abnormalities.

This warrants immediate stoppage of the drug and treatment with corticosteroids.

The other side effects include gastrointestinal disturbances, liver function abnormalities, bradycardia, asystole, localized phlebitis, non-productive cough, acute respiratory distress syndrome (rare), and bluish-slate gray discoloration of the skin (see above), along with the presence of photosensitivity.

In addition, neurological toxicity, like peripheral neuropathy, paresthesia, abnormal walking, and alteration in the blood lipid levels are seen.  Hypothyroidism or hyperthyroidism, are not uncommon.

Reversible corneal deposits can be seen in patients treated with amiodarone. As the vision remains still intact, the corneal micro-deposits are not an indication for stopping the amiodarone therapy. The mechanism behind the formation is due to the secretion of amiodarone through the lacrimal gland. There is also a risk of optic nerve injury causing blindness.

The two proposed mechanisms are phospholipidosis (the phospholipids of the liver interact with the amiodarone) and metabolic idiosyncrasy (potential in some individuals to produce more toxic metabolites from a given drug).

Except for amiodarone, all the other members of class 3 antiarrhythmic drugs, like sotalol, exert the property of reverse use dependence. This means that, as the heart rate decreases, there occurs an increased risk of prolongation of QT interval. This increases the risk of Torsades de pointes and also decreases the efficacy of the drug.

There are also other proposed mechanisms on why the incidence of Torsades de pointes is less with amiodarone; they include the properties of amiodarone like concurrent inhibition of L type calcium channels, but the mechanism is not fully understood. 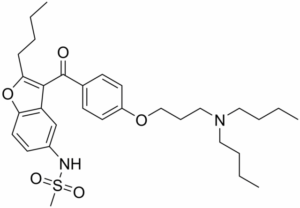 The mechanism of action is the same as the whole group. It acts on all the 4 channels (sodium, potassium, calcium and the alpha 1 and it antagonizes all these receptors).

The drug is used in patients with persistent AF who need to reduce the risk of hospitalization for AF (note, in these patients the rhythm can still be reverted back). The drug is also used for the treatment of AF in patients of Hypertrophic Obstructive Cardiomyopathy (HOCM).

The drug is contraindicated in patients with NYHA class 4 symptomatic heart failure. Dronedarone is also shown to increase the risk of death in those patients with refractory atrial fibrillation.

Prolonged QT is the most common adverse effect seen with this drug. Along with that, there occurs an increase in the renal parameters, dermatologic manifestation like allergic dermatitis, neuromuscular weakness, and bradycardia.

The drug is a racemic mixture of d and l isomers. The concentrations of both isomers is approx. 1:1 and have different mechanisms of action.

The d isomer has the blocking property of delayed potassium channel-induced depolarization (similar to other drugs in the class 3 antiarrhythmics); the l isomer in addition to this property also has a beta-blocking property.

It should be noted that although the name sotalol sounds like a beta-blocker, it is classified under the class 3 anti-arrhythmic agent based on its functional properties.

Oral sotalol is used for the treatment of sustained VT which is potentially life-threatening and in sinus rhythm patients at risk of developing atrial fibrillation.

The drug should not be given in patients with congenital QT prolongation and its common side effects are a decrease in heart rate, difficulty breathing, a dizzy feeling, fatigue and lack of energy.