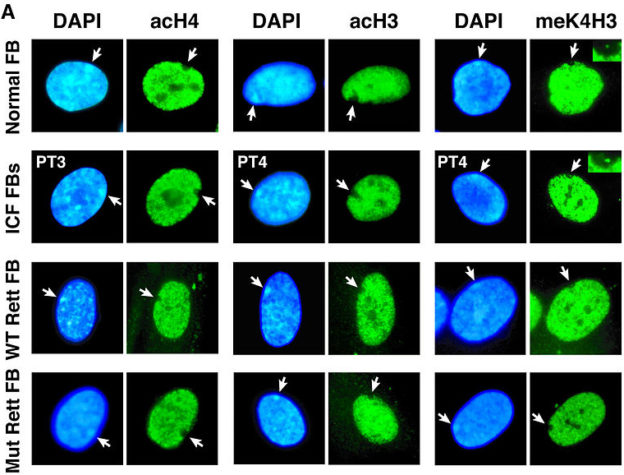 An allele is the variant form of a gene as detected by various phenotypes say a color variation of white and purple petals as demonstrated by Gregor Mendel.

Apart from some notable exceptions, diploid organisms express both alleles at a given locus in the normal state. However, a monoallelic expression is much more widespread thus need to study it to describe various disease processes.

Each allele is not expressed equally. An allelic imbalance is exhibited in 5 – 20% of the autosomal genes.

An equal amount of each allele is expressed.

The monoallelic expression can occur in a number of ways:

Different epigenetic marks are placed in the male and female germline during gametogenesis.

Genomic imprinting is a type of monoallelic expression that is determined by these epigenetic marks; thus, the copies of imprinted genes of the fertilized egg that came from the paternal and maternal contributions have different marks.

All imprinted genes encode a protein. Different proteins have different and a wide variety of functions within the cells.

During the process of imprinting, there is an introduction of epigenetic marks at specific locations in the genome. This occurs in the germline of one parent and results in monoallelic expression of one or multiple genes that are present within the imprinted region.

More than 100 genes that have a function in development are affected by genomic imprinting. Imprinting marks certain genes to have come from the mother or father. This happens during gametogenesis and before fertilization. Imprinting is maintained throughout development and adulthood.

Allelic silencing: in this process, only one allele of a gene is expressed, while the other allele is silenced.

Somatic rearrangement: in this type, there is a change in DNA organization to produce functional gene at one allele, but not at the other. Genes affected by this type of random monoallelic expression are:

Developmental origin of somatic rearrangement is B and T cell lineage.

It is the best known and most widely studied form of monoallelic expression. Usually, the genetic makeup of all male individuals comprises of a Y chromosome and an X chromosome while that of a female individual is made up of two X chromosomes. However, the expression of X linked phenotypic features is equal or mildly different in these individuals and not more in the female counterpart as it would be thought to be. This is achieved via a phenomenon described as dosage compensation where the genes on one of the X chromosome are inactivated in every cell.

This epigenetic silencing of one or more alleles in the imprinted region is achieved via cis-regulatory elements and non-coding RNAs interactions in a region called the X-inactivation center. The developmental origin of X-inactivation is early embryogenesis during the blastocyst stage. There is a random choice of one X chromosome and when one is selected, all cells of that lineage have X phenotype inactivation. However, sometimes there is a skewing of X inactivation.

Some of the epigenetic marks that are associated with the X-inactivation are as follows:

Barr body: a heterochromatic mass seen during interphase is known as a Barr body.

Dosage compensation is a term that describes the processes by which organisms equalize the expression of genes between members of different biological sexes. It results in random epigenetic silencing of one X chromosome.

Often, changes in the level of gene expression go unnoticed; however, sometimes even a small change can have severe clinical consequences.

Goldilocks principle states that something must fall within certain margins, as opposed to reaching extremes. It is derived from an initial analogy of a child named Goldilocks who chose a bowl of porridge that was neither too hot nor too cold as the preferred choice. This principle of just the right amount is applied in genetics indicate that something must be just right, neither too much, nor too less. Many genetic principles involve changes in the amount of gene product. When the amount of gene product changes, it no longer follows the ‘just right’ principle of Goldilocks.