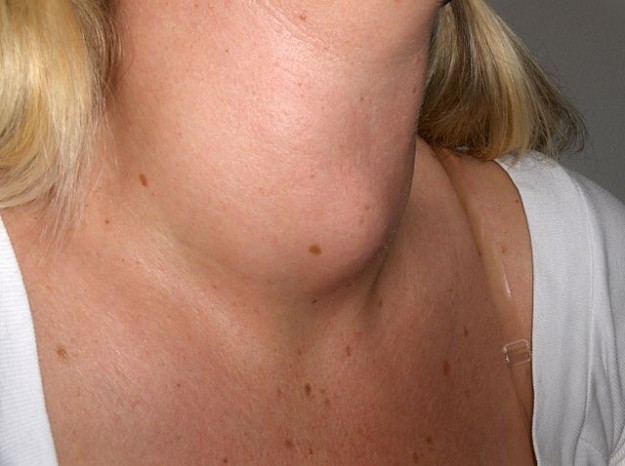 Goiter as a symptom 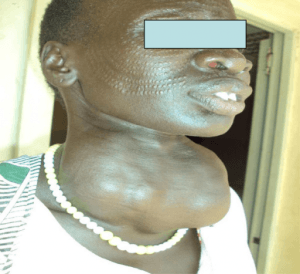 Image: Symptomatic goiter. Illustration of a participant with a goiter in South Sudan, 2012. By Openi, License: CC BY 2.0

Goiters may extend into the retrosternal space, with or without substantial anterior enlargement. Because of the anatomic relationship of the thyroid gland with the trachea, larynx, superior and inferior laryngeal nerves, and esophagus, abnormal growth may cause a variety of compressive syndromes.

What does an enlarged thyroid mean?

An enlarged thyroid, also known as goiter, refers to the increase in the size of the thyroid gland. The thyroid is an endocrine organ located on the anterior aspect of the neck region and has 2 butterfly-shaped lobes on each side of the trachea each measuring 4–6 cm by 1.2–1.8 cm and a central isthmus that measures 4–5 mm in diameter. An increase in any of the above measurements refers to thyroid enlargement that may be asymptomatic or present with features of mass effect.

WHO estimates that 2 billion people, including 285 million school-aged children still have an iodine deficiency. Goiter is endemic in areas where daily iodine intake is lower than 50 μ‎g and there is the risk of congenital hypothyroidism when the daily intake further falls to 25 μ‎g. The prevalence of goiter in areas of severe iodine deficiency can be as high as 80%. Overall, women are more often affected than men.

Classification of goiter-size by WHO

Classification of goiter based on thyroid hormone function

A deficiency in thyroid hormone synthesis or intake leads to increased thyroid-stimulating hormone (TSH) production. Increased TSH causes increased cellularity and hyperplasia of the thyroid gland in an attempt to normalize thyroid hormone levels. If this process is sustained, goiter occurs. 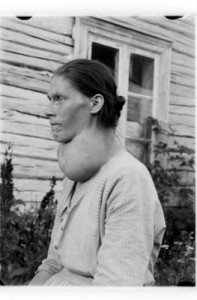 An enlarged thyroid gland may present with:

Most goiters are asymptomatic. A visible thyroid enlargement can only be seen from a volume of about 40 ml. The enlargement of the thyroid gland can be accompanied by mechanical compression of surrounding organs (tracheal and/or esophageal compression).

The extent to which goiter is symptomatic essentially depends on the location. In the case of retrosternal or retrotracheal growth, it may restrict the larynx and trachea in their anatomical position to the extent that dysphagia, dyspnea, and hoarseness may occur.

In the case of esophageal compression, the patient may complain of globus or pressure sensation in the throat, as well as problems with swallowing. Goiter may be accompanied by pain in the thyroid region and cough.

Clear indications of the possible presence of goiter are diffuse or nodular enlargement of the thyroid tissue.

Avoiding necklaces, turtlenecks, or an increase in the collar size can be regarded as the 1st indication of the presence of goiter.

A detailed medical history may provide the 1st evidence for the presence of a goiter. What should be questioned in detail:

This should start with a physical examination i.e., an inspection of the enlargement. At the beginning of a first-glance examination, the WHO goiter size classification (see above) may be used. The thyroid gland should be examined with a straight back and a bowed head. Careful inspection for a visible enlargement as well as nodes and signs of upper inflow congestion is necessary.

Palpation is the 2nd step of the examination. During the physical examination, palpation allows further judgment with regard to the extension of goiter and other clinical signs of malignancy. Important points in this case are:

In addition to palpation, auscultation may also be used. If there is an increased blood supply to the thyroid tissue, this can be perceived as an audible buzz during auscultation. This is indicative of hyperthyroidism.

Further diagnosis in the presence of goiter

With history and physical examination of the suspected goiter, the following examinations should take place: 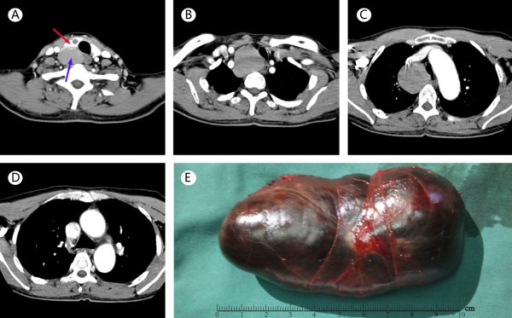 Image: CT scan and complete excision of giant thyroid goiter in the posterior mediastinum. (A) Enhanced CT scan reveals the right thyroid lobe (in red arrow) with a small cyst and a giant goiter (in blue arrow) in low density on the back of the right lobe. (B) CT clavicle cross-section reveals the giant goiter is located in the posterior mediastinum, compressing the trachea and esophagus. (C) CT of the chest reveals the goiter is well beyond the aortic arch and compressing the superior vena cava. (D) CT of the chest reveals the lower edge of the goiter reaches the carina of the trachea. (E) The tumor is in a complete capsule with large tension. By Openi, License: CC BY 2.0

With a multinodular or nodular goiter, the following questions are to be answered: Is thyroid autonomy available? Is it a benign change or a tumor, if the tissues have changed? In order to get differentiated answers to these questions, the following further diagnostic modalities should be considered:

The diagnosis of goiter initially leads to the differentiation into diffuse and nodular goiter.

The main cause of diffuse goiter is an alimentary iodine deficiency situation in industrialized countries. A consequence of this is a TSH-independent adaptive response in the form of hyperplasia. If there is an enlarged thyroid gland, differential diagnoses should include:

After noting a euthyroid nodular goiter, possible malignant and inflammatory changes, as well as functional autonomies, have to be excluded. It should be included in the differential diagnosis in case of: 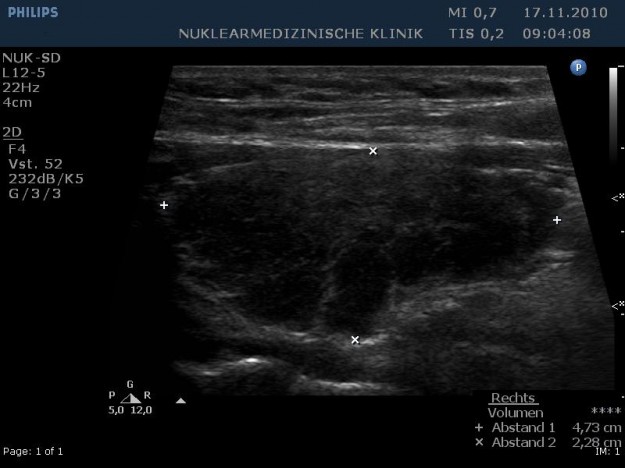 For the avoidance of medullary thyroid carcinoma, the determination of thyroid autoantibodies is recommended via the sonographic examination of:

Other laboratory parameters to check thyroid function are:

A particular challenge in the differential diagnosis of thyroid disease is a multinodular goiter. Ultrasonography and scintigraphy aid the identification of suspicious focal or disseminated autonomies (a cold/hot node) and further analysis. The aim of an examination is the detection or exclusion of thyroid autonomy.

If conspicuous nodules are detected by scintigraphy, they would require further clarification, which, in turn, should take place by means of fine-needle biopsy. The main purpose of the fine-needle biopsy, in this case, is the selection of thyroid nodules for the earliest possible histological evaluation of clinically normal or malignant tumors (thyroid carcinoma).

Not every throat swelling should be automatically regarded as a goiter. Goiter is an abnormal swelling of the thyroid gland only with a definite underlying cause. A throat swelling can also occur as part of an increase in the volume of the parathyroid glands, salivary glands, lymph nodes and skin, blood vessels, muscles, or skeletal system. The differential diagnosis of throat swelling takes the following specific causes into consideration:

The treatment of goiter is required only in case of complaints, a proven thyroid autonomy, or definitive malignancy. Initially, the motto ‘wait and watch’ should be applied to asymptomatic patients. However, if waiting is contraindicated, there is a possibility of drug therapy (levothyroxine, iodide).

In addition, radioiodine therapy or surgical therapy may be considered. In some cases, radioactive iodine is used to treat an overactive thyroid gland which results in the destruction of thyroid cells.

Each therapeutic procedure should be reviewed in terms of its suitability prior to taking action. Thus, the majority of patients with a nodule would first require no treatment, whereas, thyroid surgery is obligatory in malignancy.
In the case of euthyroid diffuse goiter, iodine deficiency is the main cause. Thus, the goal of any treatment should be the correction of iodine deficiency.

In the case of retrosternal or mediastinal goiter expansion, with the impairment of adjacent organs of the respiratory and digestive tract, a thyroidectomy in the affected region should be considered.

Goiter prevention is largely influenced by its specific etiology. Preventive measures may include:

In case of a suspicion of goiter, malignancy should be excluded.
Evidence of goiter includes:

The examination of the eventually degenerated thyroid tissues occurs via ultrasonography, scintigraphy, and fine-needle biopsy.

In addition to goiter, further possible changes in the neck should be taken into consideration when a throat swelling is present. They may indicate entirely different diseases, such as swollen lymph nodes or the increase in the volume of the salivary glands.