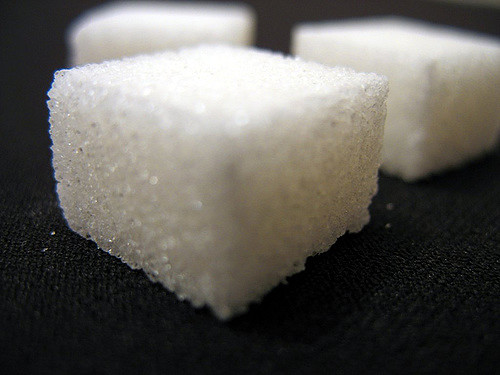 The aldohexose D-glucose has the formula (C * H2O)6, and all but 2 of its 6 carbon atoms, C1 and C6, are chiral centers. Thus, D-glucose has 24=16 possible stereoisomers. Sugars that differ only by the configuration around 1 carbon atom are known as epimers of one another. For example, D-glucose and D-mannose are epimers of each other. The most common aldoses include the 6-carbon sugars glucose, mannose, and galactose. The pentose ribose is a common component of the ribonucleotide residues of RNA. The triose glyceraldehyde occurs in several metabolic pathways.

The hydroxyl and either the aldehyde or ketone functions of monosaccharides react intermolecularly to form cyclic hemiacetals and hemiketals, and these cyclic sugars have 1 of 2 anomeric carbons. The anomeric carbon is the carbon of the carbonyl group that results from the cyclization of the sugar, forming a chiral center. For example, the α-anomer of glucose has the OH substituent on the anomeric carbon on the opposite side of the sugar ring from the CH2OH group at the chiral center. This designates it in the D or L configuration. The β-anomer has its OH group on the same side.

The 2 anomers of glucose have different physical and chemical properties, including different optical rotations. These 2 anomers freely interconvert in aqueous solutions, but the β-D-anomer of glucose is catabolized by hexokinase more efficiently than the α-D-anomer. 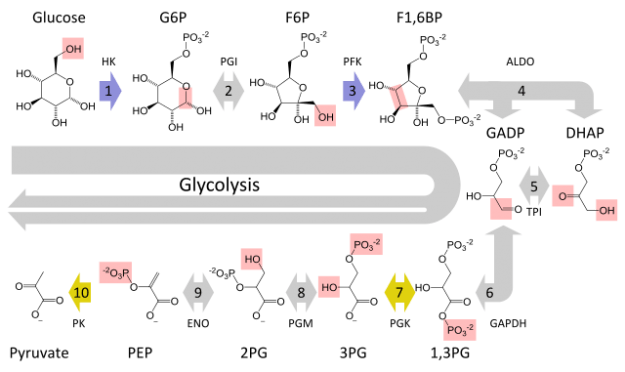 Glucose primarily becomes available in the blood as a result of glycogen breakdown, or from its synthesis from noncarbohydrate precursors (gluconeogenesis). Glucose enters the cell through specific carriers and must be immediately phosphorylated, as dephosphorylated glucose is poisonous to the cell. 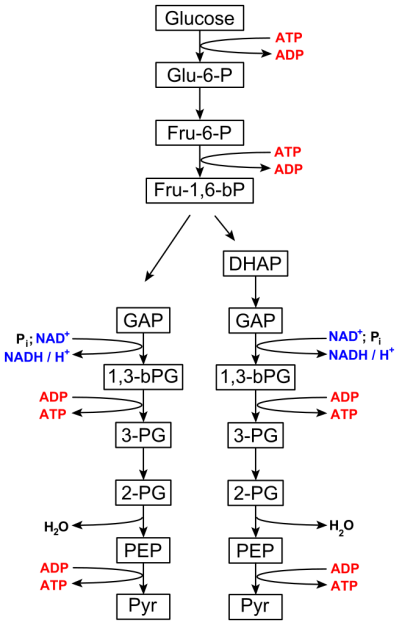 The purpose of glycolysis is to convert the C6 glucose to 2 C3 pyruvate molecules, and the free energy released during this process drives the synthesis of ATP from ADP and Pi. ATP is invested early in the pathway but is resynthesized twice over in the later stages of the pathway. For this reason, glycolysis is usually discussed in the context of 2 stages:

Stage 1 (Energy investment): In reactions 1–5, which consume 2 ATP, glucose is phosphorylated and split to yield 2 triose molecules of glyceraldehyde-3-phosphate (GAP).

Stage 2 (Energy recovery): In reactions 6–10, which generate 4 ATP, 2 molecules of GAP are enzymatically converted to pyruvate. The net production of ATP for the pathway is 2 ATP produced per glucose molecule catabolized.

The stoichiometry of the pathway is as follows:

The NADH formed in the pathway must be continuously reoxidized so that glycolysis is supplied with its primary oxidizing agent, NAD+. 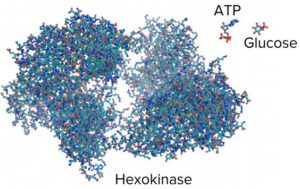 HK transfers a phosphoryl group from ATP onto the 6th carbon of glucose to form Glucose-6-phosphate (G6P).

A kinase is an enzyme that transfers phosphoryl groups between ATP and a substrate. HK is a nonspecific enzyme that works on a variety of hexoses, such as D-glucose, D-mannose, and D-fructose.

Magnesium (Mg2+) is a cofactor of the HK reaction and is required for the enzyme’s function because it shields negative charges on ATPs phosphate oxygen atoms, which makes the terminal phosphate more accessible to nucleophilic attack by the C6-OH group on glucose.

PGI converts G6P to fructose-6-phosphate (F6P). PGI isomerizes the aldose glucose to a ketose-fructose, which is accomplished by opening the ring up using the lysine residue in the active site of the enzyme, followed by ring closure by PGI’s active-site histidine.

The PFK reaction is similar to the HK reaction, which is a nucleophilic attack by the C1-OH group of the substrate on the electrophilic terminal phosphate group of ATP. Mg2+ is again a cofactor of the reaction. This reaction is one of the rate-determining reactions of the pathway, and as will be discussed later, it is the pathway’s most important regulated step.

Note: Pay special attention to how the numbering system of the atoms on the substrates changes. Glucose’s atoms 1, 2, and 3 become DHAP’s 3, 2, and 1; and GAP’s atoms 1, 2, and 3. Aldol cleavage between C3 and C4 of FBP requires a carbonyl at C2 and a hydroxyl at C4, which explains why G6P is isomerized to F6P. Aldol cleavage of G6P would produce products of unequal carbon chain length, whereas, aldol cleavage of FBP results in 2 interconvertible 3-carbon fragments that can enter a common catabolic pathway.

TIM interconverts DHAP and GAP which allows DHAP to proceed through glycolysis. The active site of the enzyme houses glutamate and histidine residues that act as general acids and bases, respectively.

Image: The first half of glycolysis. By philschatz, License: CC BY 4.0

GAPDH catalyzes the phosphorylation and oxidation of GAP, yielding the 1st high-energy intermediate of the pathway, 1,3-biphosphoglycerate (1,3-BPG). This phosphorylation produces 2 (because there are 2 molecules of 3-carbon GAP) NADH from NAD+ and Pi.

The enzyme features an active-site cysteine sulfhydryl group that allows for the direct hydride transfer of a proton from C1 of GAP to NAD+ by acting as a nucleophile during its attack on the aldehyde. This forms a thiohemiacetal intermediate that undergoes oxidation to an acyl thioester during the direct hydride transfer to NAD+. The thioester intermediate then undergoes a nucleophilic attack by Pi to form 1,3-BPG, a mixed anhydride.

The GAPDH and PGK reactions are coupled, to allow for a slightly unfavorable reaction to being ‘pulled forward’ by a highly favorable reaction. This reaction is also an example of substrate-level phosphorylation (ATP production in the absence of O2).

PGM converts 3PG to 2-phosphoglycerate (2PG) by transferring the functional group phosphate from the 3rd carbon to the 2nd carbon.

PGM accomplishes the preparation of the high-energy compound in the next reaction by use of its active-site histidine residue, which generates a 2,3-bisphosphoglycerate (2,3-BPG)-enzyme complex.

Note: Remember that 2,3-BPG binds to deoxyhemoglobin and causes it to have a lower affinity for oxygen. Actively respiring tissues need oxygen to produce energy, and 2,3-BPG serves as a signal that the tissue is in need, and so hemoglobin ‘dumps’ oxygen where it can be used. The oxygen is not used in glycolysis (glycolysis is an anaerobic pathway), but in the oxidative phosphorylation that occurs in the mitochondria.

Enolase dehydrates 2PG to phosphoenolpyruvate (PEP), which is the 2nd high-energy molecule formed in glycolysis.

PK generates ATP during its conversion of PEP to pyruvate, by coupling PEP cleavage to the synthesis of ATP.

Image: The second half of glycolysis. By philschatz, License: CC BY 4.0 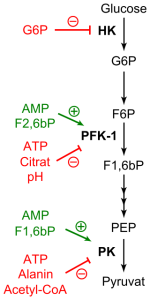 Image: An overview of the regulation of glycolysis. Activators of hexokinase (HK), phosphofructokinase-1 (PFK-1) or the pyruvate kinase (PK) are marked in green. Metabolites that inhibit these enzymes, are marked in red. By Yikrazuul, License: Public Domain

The bifunctional enzyme itself is regulated by phosphorylation and dephosphorylation. In the liver, the dephosphorylated state leads to an elevated level of fructose-2,6-bisphosphate, which means PFK-1 will be stimulated to push flux through glycolysis. This activation is caused by insulin, which allosterically inhibits phosphorylation.

Phosphorylation (activated by glucagon) reverses the activity and decreases the fructose-2,6-bisphosphate level. When PFK-1 is inhibited and FBPase is activated, flux is shifted from glycolysis to gluconeogenesis. In muscle, a different isoenzyme exists, which responds the opposite way to phosphorylation and dephosphorylation.

In addition to the ‘fasted-state’ regulation by allosteric regulation, phosphorylation, and dephosphorylation, the synthesis of enzymes is also under hormonal control through the regulation of gene expression. Catecholamines (via cAMP) repress the glycolytic enzymes HK, PFK-1, PFK-2, (which produces fructose-2,6-bisphosphate), and PK. Catecholamines and glucagon induce gluconeogenesis enzymes via cAMP. Specifically, these 2 induce the synthesis of pyruvate carboxylase, PEP carboxykinase, FBPase, and G6Pase.

Depre, C., Rider, M.H., and Hue, L., Mechanisms of control of heart glycolysis, Eur. J. Biochem. 258, 277–290 (1998). [Discusses how the control of glycolysis in heart muscle is distributed among several enzymes, transporters, and other pathways.]

Frey, P.A., The Leloir pathway: a mechanistic imperative for three enzymes to change the stereochemical configuration of a single carbon in galactose, FASEB J. 10, 461–470 (1996).

The cooperative nature of regulated enzymes “Why are genetically engineered organism’s part of this effort?” Hofmeyr, J.-H.S. and Cornish-Bowden, A., Regulating the cellular economy of supply and demand, FEBS Lett. 476, 47–51 (2000).