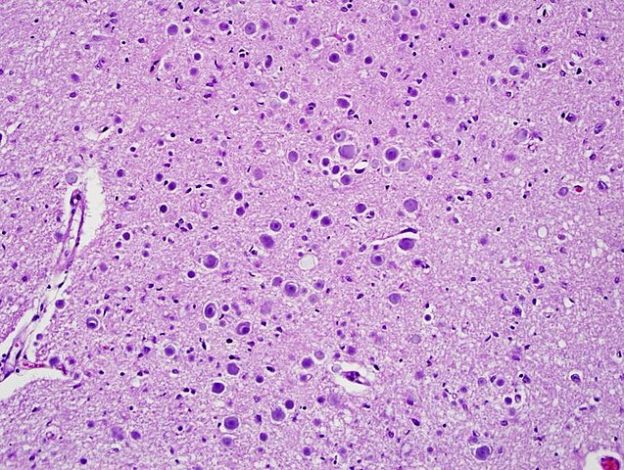 Glycogen: The Storage Form of Glucose

Significance and localization of glucose

Carbohydrates are key components of our diet. They provide energy, they are precursors of lipids and amino acids, and they store energy in the form of glycogen.

The stored form of glucose in plants is starch, which resembles the glycogen stored in human or animal cells. The special chemical structure of glycogen allows for rapid synthesis and breakdown, which means that the body can respond quickly when glucose is in short supply.

The function of glycogen differs greatly between the two major sites of glycogen storage—in the liver and in the skeletal muscles:

Glycogen is a branched polymer consisting of residues of glucose, which are linked by α-1,4 O-glycosidic bonds with α-1,6 branches every 8–10 residues.

These linkages create a tree-like polymer consisting of up to 50,000 glucose monomers, which appear as cytosolic grains when examined with an electron microscope. Glycogen provides energy storage with minimum effect on cellular osmolarity. It has only minimal osmotic activity due to its small size. Free glucose cannot be stored due to its high osmotic activity.

Note: Free glucose would cause each cell to burst due to its osmotic activity.

Another advantage is the branched structure of glycogen. The resulting numerous non-reducing ends ensure rapid mobilization and maintenance of the blood glucose level.

The synthesis of glycogen does not usually involve the de novo formation of glycogen but instead lengthens existing glycogen molecules by adding glucosyl residues. Every glycogen molecule has, at its core, a glycogenin protein, which is a glycoprotein that remains attached to the reducing end of glycogen during its degradation.

Figure 3 provides an overview of the most important reactions of glycogen synthesis.

The first step corresponds to the first reaction of glycolysis. Glucose is phosphorylated to glucose-6-phosphate. In skeletal muscles, this reaction is catalyzed by the enzyme hexokinase and, in the liver, by the enzyme glucokinase.

Image: Action of hexokinase with glucose as a substrate. By Jmun7616. License: Public Domain.

The second step consists of the isomerization of glucose-1-phosphate by the enzyme phosphoglucomutase.

In order to produce an O-glycosidic compound for the synthesis of glycogen, a high level of energy is required. For this reason, glucose-1-phosphate is initially activated by a reaction with uridine triphosphate (UTP). This produces uridine diphosphate (UDP)-glucose and pyrophosphate, which is hydrolytically cleaved into two phosphates by the enzyme pyrophosphatase.

Now, the glucose can be transferred to the C4–OH group on one of the non-reducing ends of glycogen to form an α-1,4 glycosidic bond. This reaction is catalyzed by the enzyme glycogen synthase, liberating UDP, which is then recycled by conversion to UTP with adenosine triphosphate (ATP).

Incorporation of branch points in glycogen

The characteristic α-1,6 branches of glycogen are the products of an enzyme called amylo-(1,4→1,6)-transglycosylase = branching enzyme.

The amylo-(1,4→1,6)-transglycosylase adds branches to the growing glycogen molecule by forming α-1,6 linkages by binding to a linear α-1,4 chain that consists of at least 11 glucose monomers. Of these, a chain of seven glucose monomers is removed and transferred to the OH group of the C6 of a glucose residue. Thus, located between two branch points are at least four glucose monomers.

Note: The high density of branches characteristic for glycogen gives rise to a great number of non-reducing ends, which determines the possible rates of synthesis and breakdown and enables a maximum speed of glucose release. It is thus possible to quickly access glycogen stores to lower or increase blood glucose levels when required.

The Breakdown of Glycogen: Glycogenolysis

Glycogenolysis follows a different pathway than glycogenesis. Glucose-1-phosphate, a high-energy compound, is released. The steps of glycogenolysis are as follows:

The liver enzyme glucose-6-phosphatase converts glucose-6-phosphate to glucose, which regulates and maintains blood glucose levels. The skeletal muscles lack this enzyme and can therefore not release glucose into the bloodstream.

Glycogen phosphorylase is dependent on pyridoxal phosphate (PLP) and can only cleave α-1,4-glycosidic bonds. It stops cleaving α-1,4 linkages four glucose monomers away from an α-1,6 branch point.

Degradation of branching points during glycogenolysis

The debranching enzyme (4-alpha-glucanotransferase) is a bifunctional enzyme that is responsible for the degradation of branching points. It has the following functions:

Glycogen metabolism is regulated by two enzymes: glycogen phosphorylase and glycogen synthase. The coordination is mainly dependent on hormone-mediated and, in part, allosteric regulatory effects.

The allosteric regulation is a form of regulation of enzyme activity carried out by certain enzymes (allosteric enzymes) that are almost always composed of multiple subunits. These may occur in more than one stable conformation.

Regulation of the breakdown of glycogen (glycogenolysis)

Two distinct isoforms of glycogen phosphorylase exist; one is expressed in the liver and the other in the skeletal muscle. Because the process of glycogen metabolism is different in these two parts of the body, the muscles and liver are regulated separately.

Calcium ions also have an activating effect on the skeletal muscle. In a working muscle, the sarcoplasmic reticulum releases calcium ions, thus increasing the intracellular calcium concentration. The actual activation of glycogen phosphorylase is mediated by a calcium-calmodulin complex.

Phosphorylase b is also subject to allosteric effects. The inactive enzyme can become partially active, and elevated levels of adenosine monophosphate (AMP) can activate phosphorylase b. Even before phosphorylase kinase becomes active in order to meet specific demands of the cell (hormonally controlled), ATP and glucose-6-phosphate inhibit the activation of phosphorylase b, which means that the inactive state is favored. This mechanism prevents unnecessary depletion of muscle glycogen stores when the metabolic demands have already been met.

Regulation of the breakdown of glycogen in the liver

In the liver, the enzyme phosphorylase kinase catalyzes the conversion of phosphorylase b to phosphorylase a. ATP and AMP are present in the liver; however, they are not relevant, because the liver does not degrade glycogen for its own use. Instead, the liver meets its own energy requirements using fatty acids.

Regulation of the synthesis of glycogen (glycogenesis)

Also subject to allosteric regulation is the glycogen synthase b, which is activated by high concentrations of glucose-6-phosphate.

This important control mechanism prevents glycogen from being synthesized at the same time that it is being broken down. Three hormones play an important role here: glucagon, adrenaline, and insulin. Glucagon and adrenaline stimulate glycogen degradation, while insulin stimulates the synthesis of glycogen.

Upon activation of the insulin receptor, the phosphodiesterase is activated, decreasing adenosine 3′,5′-cyclic monophosphate (cAMP) levels and inactivating protein kinase (PKA). An inactive PKA decreases the level of phosphorylation of the phosphorylase kinase, which has an inhibitory effect on this enzyme. This, in turn, decreases the rate of glycogen degradation.

Note: Adrenaline and glucagon have antagonistic effects on the mentioned signaling cascades, which are activated and inactivated by insulin.

The following illustrations show the different mechanisms at a glance: 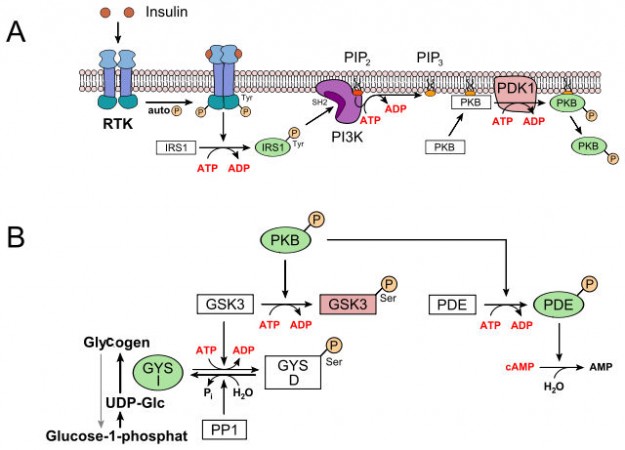 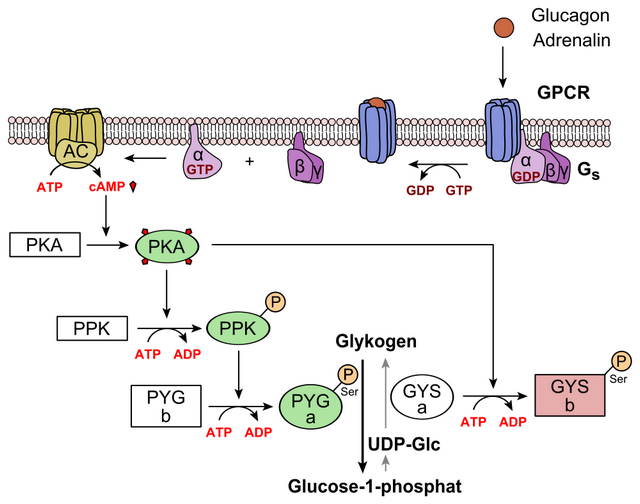 Blood contains only very small amounts of glucose. The standard value of blood glucose is 80–120 mg/100 mL of blood. This corresponds to about 1 g/L of blood; accordingly, the total amount of glucose in circulating human blood is normally only about 5 g.

Note: Muscles and other tissues do not possess these special regulatory mechanisms. Adrenaline regulates and controls the wasteful depletion of glycogen during periods of starvation.

Glycogenoses are a group of hereditary diseases affecting the metabolism of glycogen, resulting in the extensive accumulation of glycogen deposits in organs and in muscle tissue. Deficient enzymes involved in glycogen metabolism are responsible for glycogenoses. The most common disease is the autosomal recessive defect of glucose-6-phosphorylase wherein glycogen is synthesized, but cannot leave the cell.

The liver stores more and more glycogen, resulting in an enlarged liver (hepatomegaly) (up to 10 kg (22 lb)). Furthermore, glucose levels in the blood can no longer be maintained. This leads to severe hypoglycemia between meals.

So far, 11 distinct glycogen storage diseases and subforms have been identified. The typical symptoms and complications in addition to hepatomegaly include: hypoglycemia, nephromegaly, cirrhosis of the liver, and myasthenia.

These are the most common types of glycogenoses:

The treatment is aimed at maintaining a consistent blood glucose level in order to avoid severe hypoglycemia (especially at night).