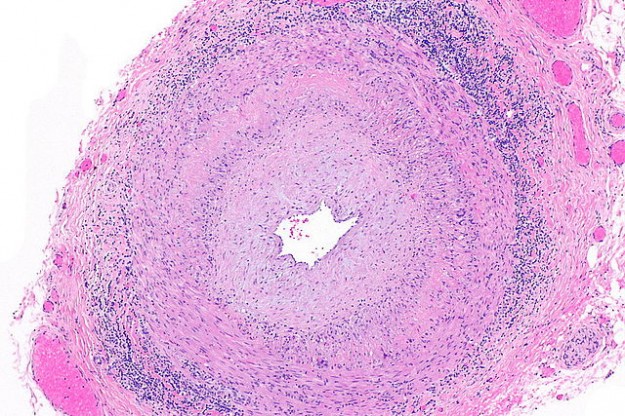 Vasculitis as the foundation of giant cell arteritis and polymyalgia rheumatica

Both giant cell arteritis (GCA) and polymyalgia rheumatica (PMR) arise from granulomatous vasculitis of medium-sized and large arteries. Both diseases share symptoms of localized pain and the pathognomonic appearance of giant cells. GCA, or temporal arteritis or cranial arteritis, predominantly affects cranial arteries radiating from the carotid artery and causes headaches so severe that it leads to ocular involvement. This disorder results in the inflammation of arteries of the scalp, neck, and arms, which leads to narrowing of the arteries, blocking normal blood flow.

PMR causes symmetrical muscle pain in the shoulder girdle due to inflammation of the peripheral arteries, often the subclavian artery. The stiffness is most noticeable in the morning or after a period of inactivity and typically last longer than 30 minutes. Additional features of PMR are bursitis or synovitis of large joints.

GCA is the most common of all vasculitides, affecting mostly women of advanced age (this is true for about 75% of all cases). Women are affected at least twice as often as men. The incidence following the eighth decade of life is approximately 50/100,000 people. Disease susceptibility is associated with northern European descent and is seldom observed in people of African American and Asian descent.

The etiology of GCA remains unexplained. Data indicate the disease is probably initiated by exposure to exogenous antigens. Numerous viruses and bacteria have been proposed as potential precipitants, including parvovirus, parainfluenza virus, varicella-zoster virus, Chlamydia pneumoniae, and Mycoplasma pneumoniae. The scientific community suspects a trigger, possibly through viral infections, which activates the disease in the presence of genetic predisposition.

Pathology and Pathophysiology of Giant Cell Arteritis and Polymyalgia Rheumatica 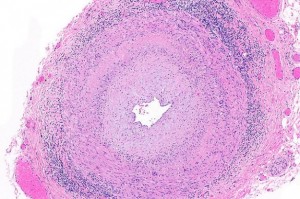 GCA and PMR are T cell-dependent autoimmune diseases, which typically affect medium-sized and large arteries as in granulomatous polyarteritis. The pattern of involvement is indeed different, and the diseases can occur separately; however, in approximately 50% of cases, the two manifestations overlap.

Histologically, GCA and PMR can often be detected in the vessel wall as shown by the presence of giant cells and the infiltration of lymphocytes. Significant luminal stenosis frequently results due to reactive wall thickening in the inflamed areas. This is especially relevant in the implication of the ophthalmic artery as hypoperfusion of the eye may lead to irreversible damage within a few hours. In PMR, inflammatory infiltrates may also be found in the large joints.

Both diseases are associated with general symptoms such as fatigue, unintentional weight loss, night sweats, and possible fever. In addition, both GCA and PMR have classic symptoms and patterns of involvement, by which they can be distinguished from one another. It is important to remember that in approximately 50% of GCA cases, PMR is also present; these diseases are not always observed in isolation.

Temporal arteritis shows a predilection for the vertebral arteries, subclavian arteries, and extracranial branches of the carotid arteries. The relationship between temporal arteritis and GCA is the inflammation that may involve the aortic wall and rarely the femoral and coronary arteries.

The majority of patients who with present GCA primarily complain of throbbing and ‘drilling’ headaches, with the sensations, often occurring unilaterally and at the temples. If these are aggravated by chewing, the pain is referred to as claudicatio masticatoria (masseter pain). Furthermore, about 40% of GCA cases present with ocular involvement in the form of transient visual disturbances through hypoperfusion of the retinal arteries (amaurosis fugax), ocular pain, and general vision impairments progressing to blindness. The time window for avoiding irreversible blindness in progressive symptoms may be less than one hour.

Clinically, patients with GCA typically present with a tender prominent temporal artery and, in certain circumstances, a weakened pulse. Rarely, larger proximal vessels such as the aorta or peripheral arteries may also show inter-arm and inter-leg blood pressure differences and claudication.

PMR has symmetrical, intense pain in the shoulder or hip regions as a leading symptom. The pain especially appears at night and is often accompanied by the tenderness of the muscles in the affected areas. Usually, affected patients complain of morning stiffness that typically ceases about an hour or more after waking. Joint involvement may eventually lead to severe restriction of a patient’s movements.

The American College of Rheumatology (ACR) has devised diagnostic criteria (ACR criteria) that are used for diagnosis and progression monitoring for both diseases. Medical laboratory inflammatory parameters are paramount for establishing the diagnosis of GCA and PMR. An extremely elevated erythrocyte sedimentation rate (ESR) is common. In the initial stage, however, the ESR may be normal. Another important inflammatory parameter is C-reactive protein (CRP), a liver-derived acute phase protein. Leukocytosis in patients with GCA or PMR is less pronounced. 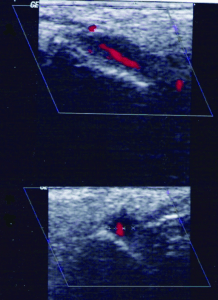 Ultrasound is an important method of investigation. In the case of GCA, a narrowing of the lumen and a hypoechoic ring (halo) around the vessel are observable through a color-coded duplex ultrasound of the temporal arteries, presumably showing inflammatory wall thickening. In the presence of typical signs, especially high-grade stenosis, one can probably omit a biopsy of the temporal artery.

If PMR is suspected, an ultrasound can be used to investigate proximal peripheral arteries; signs of bursitis of the large joints, especially bilateral bursitis, allow one to obtain additional confirmation.

ACR criteria of GCA (temporal arteritis) require that at least 3 of the following 5 criteria are met to confirm diagnosis: 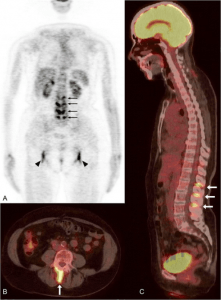 Image: FDG uptake in the lumbar interspinous spaces of a patient with polymyalgia rheumatica. By Openi. License: CC BY 4.0

The ACR criteria of PMR presume the patient is at least 50 years of age, complains of new-onset bilateral shoulder pain, and shows increased CRP or elevated ESR in investigations. Thus, the following criteria apply:

Note: One can easily memorize the most important signs and symptoms of the disease using the ACR diagnostic criteria.

It is important to differentially diagnose GCA from other diseases that are associated with new-onset headaches. For example, distinguishing GCA from meningitis is of utmost importance, as treatment with corticosteroid therapy could have disastrous effects. Amaurosis fugax can also arise from arterial occlusion, such as with an embolus from the carotid artery.

Exclusion of other rheumatic diseases in polymyalgia rheumatica

One must especially differentiate PMR from other rheumatic diseases. With PMR, the absence of serum markers such as rheumatoid factor serves as crucial evidence. Polymyositis and dermatomyositis, which can have very similar characteristics, are accompanied by a greater increase in muscle enzymes that is seen in PMR, and are especially associated with an increased creatine kinase value.

Corticosteroids in treatment of giant cell arteritis and polymyalgia rheumatica

The most important treatment of both GCA and PMR is the pharmacological management with glucocorticosteroids. However, differences exist in administration and dosage. After a few days, symptoms should improve significantly; if they don’t, other differential diagnoses should be considered. 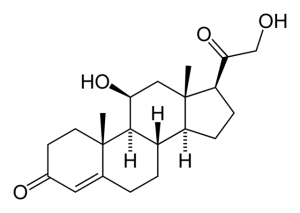 Diagnosed GCA is treated in different ways, depending on the degree of acute symptoms. An initial loading dose of corticosteroids is gradually reduced to a maintenance dose that is continued for at least 2 years in order to prevent recurrence. If there is ocular involvement or amaurosis fugax, it is considered an emergency, and one must immediately start intravenous high-dose therapy.

PMR usually can be treated with a lower dose of corticosteroids. One can reduce steroids by administering immunosuppressants; methotrexate, for example, is suitable. Long-term corticosteroid therapy should be supplemented with bisphosphonates for prevention of osteoporosis and with proton-pump inhibitors for protection of the stomach lining.

Note: Swift action and intravenous corticosteroid therapy is of utmost importance, particularly in the case of imminent blindness!

Untreated GCA leads to blindness in approximately 30% of cases. With appropriate treatment, the prognosis of both diseases is comparatively favorable. Complete remission can be expected after about 2 years of treatment. Recurrences occur in approximately one in three patients with GCA. After the treatment period of 2 years, one should start tapering the dose of steroids, as long-term corticosteroid therapy is associated with increased mortality.