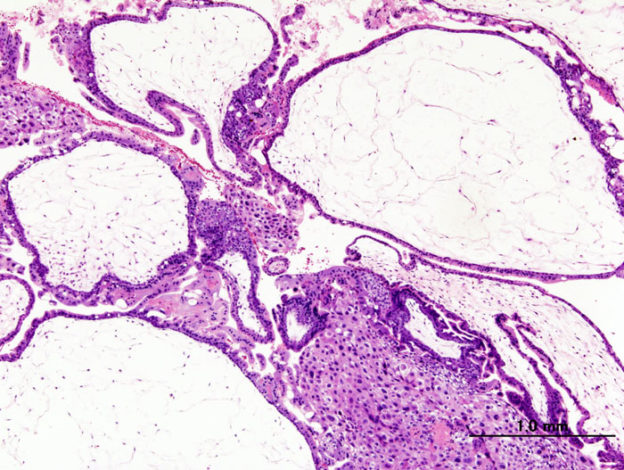 Gestational trophoblastic disease (GTD) is a spectrum of placental disorders resulting from abnormal placental trophoblastic growth, ranging from benign molar pregnancies (complete and partial) to neoplastic conditions, such as invasive mole, choriocarcinoma, and placental site trophoblastic tumor (PSTT), depending on their aggressiveness and invasiveness.

The following discussion is limited to the molar pregnancies unless otherwise mentioned.

The incidence of molar pregnancy is estimated to be 1 in 1,200 live births in the United States. The incidence is higher in Asia, at a rate of 1 in 500—600 pregnancies. Complete moles are more common than the incomplete type. Since this is a disease of pregnancy, it only occurs in women. Its incidence increases in the extremes of ages. Increasing maternal age is the single most significant risk factor for GTD, and the risk increases 5—10 times after the age of 40 years. It is also common in teenage pregnancies. Parity, however, does not increase the risk.

Molar pregnancies are divided into complete and partial moles. This distinction is based on gross pathology, histopathology, and karyotyping.

Complete moles are diploid in nature and paternal in origin. They are formed when an ’empty’ anuclear ovum gets fertilized, either by one sperm, giving the solely paternal 46XX karyotype, or by two sperms, giving the less common 46XY karyotype. They do not contain fetal tissue. Other features of complete moral pregnancy are described in Table 1.

Partial moles are triploid in origin. They are formed when a normal ovum is fertilized by two sperms; hence, they contain two sets of paternal genes and one set of maternal genes. They contain fetal tissue. The other features of partial molar pregnancy are described in Table 1.

Table 1: a comparison between complete and partial molar pregnancy, the two most common forms of gestational trophoblastic disease. 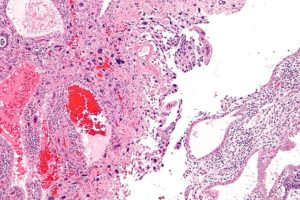 Additionally, overexpression of the epidermal growth factor receptors and matrix metalloproteinases (MMPs), which module cell-to-matrix interactions, have been described in GTD pathogenesis.

In cases of neoplastic GTDs, there are p53 mutations in the histopathological examination of GTD biopsies, similar to other forms of cancer. Other oncogenes known to be associated with GTD include c-myc, BCL-2, Rb, and p21.

The classic clinical presentation of molar pregnancy includes features such as:

Other features suggesting GTD include:

All clinicians need to be aware of these signs and symptoms and should order a pregnancy test immediately.

In rare instances, women with GTDs may present with clinical features of hyperthyroidism, abdominal distension, and/or early-onset pre-eclampsia. Since the human chorionic gonadotropin (hCG) has structural homology with thyroid-stimulating hormone (TSH), elevated levels of hCG in women with GTDs may have thyrotropic actions.

The single and the most important test for the diagnosis of GTD is the assessment of human chorionic gonadotropin levels (hCG) levels, which are greatly elevated for the gestational age. Additionally, the hCG level can help predict outcomes in patients with GTD. The hCG correlates well with the volume of the trophoblastic tissue; larger, aggressive tumors have higher hCG levels.

The next diagnostic step is ultrasonography. It helps with pre-evacuation diagnosis, but the definitive diagnosis is made by histological examination. GTDs have a snowstorm appearance within the uterine cavity, with multiple hypoechoic areas, corresponding to villi and a missing fetus or gestational sac.

Ultrasonography in early pregnancy leads to earlier diagnoses of molar pregnancies even before the development of classic clinical features.

Complete moles have marked chorionic villi edema and swelling, which is evident on ultrasound examination, and there is no fetal tissue. Patients with partial moles will have focal cystic changes in the placenta and highly deformed fetal tissue.

A chest X-ray should be advised whenever a molar pregnancy is diagnosed to look for metastatic spread. The lungs are the most common primary site of metastasis for neoplastic GTDs.

GTDs are highly vascular tumors, and intense bleeding can occur during or after evacuation. Intravenous oxytocin may help facilitate uterine contraction and reduce the risk of uterine bleeding. Rh-negative women should receive Rh immune globulin.

Neoplastic GTDs are encountered in up to 28% of the patients with complete moles after evacuation.

The risk of developing neoplastic GTD depends on the following factors:

Accordingly, after an evacuation, patients should be followed up with a weekly hCG assessment until hCG is normalized in at least three consecutive measurements. Once hCG levels are normalized, they should be checked monthly for six months. The hCG levels should decrease; if they increase anytime during the follow-up, the metastatic disease should be ruled out.

During follow-up, patients who have not undergone hysterectomy should use barrier contraceptive methods to prevent pregnancy. Since pregnancy causes the hCG levels to rise, it will disturb the follow-up process and increases the risk of future GTDs. After hCG levels are normalized, patients may use OCPs. Intrauterine contraceptive devices should be discouraged in early stages to reduce the risk of uterine perforation.

Patients whose hCG levels are not normalized are candidates for chemotherapy.