Gestational diabetes is defined as the first manifestation/recognition of a disruption of glucose tolerance levels, which occurs during pregnancy and ends within 6 weeks postpartum. It is triggered by increased insulin resistance, which is caused by the pregnancy. The transition from normal glucose tolerance levels during pregnancy and gestational diabetes is smooth, and a threshold value seems not to exist.

About 2% of all pregnant women have gestational diabetes. The frequency differs between the various ethnic groups: Asian and Latin American women are more likely to be affected than Caucasian women.

The pathophysiology of gestational diabetes and diabetes type 2 is identical for the most part. During pregnancy, the carbohydrate metabolism changes. In the 1st trimester, increased estrogen and progesterone levels are associated with a decrease in fasting blood sugar until 12 weeks of gestation.

From the 2nd trimester on, there is a risk for peripheral insulin resistance due to the release of anti-insulin signals from the placenta. This triggers a rise in fasting and postprandial glucose leading to the transplacental transfers of glucose into the bloodstream of the fetus. Lowered transfer of maternal amino acids and increased carbohydrate mobilization to supply fetal demands follows this. Maternal carbohydrate metabolism is diverted into fat and this increases insulin resistance. Aside from the hormonal changes during pregnancy, cytokine and adipokine may be released by adipose tissue and the placenta. 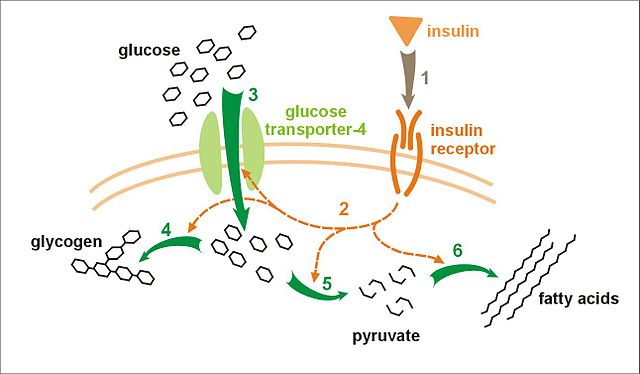 Image: Effect of insulin on glucose uptake and metabolism. Insulin binds to its receptor (1) on the cell membrane which, in turn, starts many protein activation cascades (2). These include: translocation of Glut-4 transporter to the plasma membrane and influx of glucose (3), glycogen synthesis (4), glycolysis (5) and fatty acid synthesis (6). By: User Meiquer, License: CC BY-SA 3.0

A case study about gestational diabetes could look like this.

A 36-year-old woman in the 9th week of pregnancy is pregnant with her 2nd child. Her 1st pregnancy was uneventful and the healthy child, who was born 7 days after the due date, had a birth weight of 4280 g.

The values of the blood sugar tests in the 2nd trimester were ‘marginal’. During the 1st pregnancy, she gained a total weight of 18 kg and, despite occasional sports and ‘more vegetables and fruit’, she was not able to lose the additional weight entirely. Her metabolism was not monitored during the pregnancy as she moved and had not found a family doctor.

With gestational diabetes, there are usually not any of the initial discomforts due to the increased blood sugar levels; therefore, it does not cause the typical clinical picture of diabetes type 1. Polydipsia, glucosuria, changes in the amount of amniotic fluid, and arterial hypertension may occur. However, possible disruption of fetal development and increased maternal risk for secondary diseases are deciding factors. Infantile malformations (diabetic fetopathy) are more common.

The organ that is most commonly affected by diabetic fetopathy is the heart leading to the development of anomalies such as atrial and ventral septal defects, transposition of the great arteries, and tetralogy of Fallot. Other systems involved include the nervous and renal systems, and the formation of abdominal wall defects may occur. The risk of malformations increases with the level of HBA1c.

Growth restriction and disturbances of the blood circulation in the placenta are also common. The resulting undersupply can lead to intrauterine death.

Growth acceleration and fetal obesity are seen in 15–45% of cases.

To diagnose gestational diabetes, an oral glucose tolerance test should be performed (OGTT); first screening, then as a 75-g OGTT.

If the patient screens positive, a 3-h GTT is performed to diagnose gestational diabetes.

Dietary modification is the first-line method for the management of diabetes. If diabetes is not controlled by diet, then oral hypoglycemic or insulin is needed.

Important! All women diagnosed with gestational diabetes should be screened for overt diabetes in the postpartum period.

Women with gestational diabetes have a 15–50% lifetime risk of developing diabetes.

For the first 2 weeks, attempts to attain the target values via diet should be made (switch to carbohydrates that are slowly absorbed and avoidance of industrial sugars, products made of superfine flour, etc). If this approach fails, therapy with human insulin is possible.

Important: therapy with oral diabetics is contraindicated! Frequent examinations of the metabolism (i.e., daily blood sugar profiles) and sonographic examinations should be performed in order to monitor the normal development of the fetus.

There is approximately a 50% risk for the mother to develop gestational diabetes again in another pregnancy. Additionally, the risk of developing diabetes mellitus type 2 is increased as well.

If the blood glucose levels are well-adjusted, premature induction of labor or C-section is unlikely.

In Moore, L. E. (2018). Diabetes in Pregnancy: The Complete Guide to Management.

KIM, C. A. (2016). Gestational diabetes during and after pregnancy. Place of publication not identified: SPRINGER LONDON LTD.

Sacks, D. A. (2011). Diabetes and pregnancy: A guide to a healthy pregnancy for women with type 1, type 2, or gestational diabetes. Alexandria, VA: American Diabetes Association.