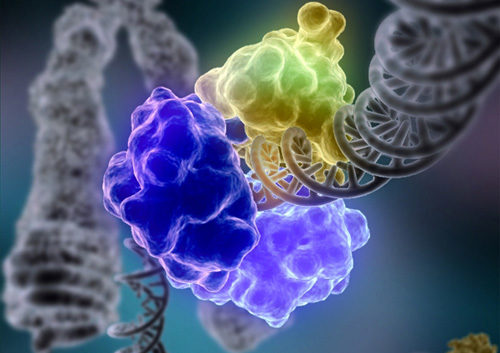 Image: “DNA damage, due to environmental factors and normal metabolic processes inside the cell, occurs at a rate of 1,000 to 1,000,000 molecular lesions per cell per day. A special enzyme, DNA ligase (shown here in color), encircles the double helix to repair a broken strand of DNA.” by Tom Ellenberger, Washington University School of Medicine in St. Louis. – Biomedical Beat, Cool Image Gallery. License: Public Domain

Definition of Genome Instability and Aging

Genome instability is the increased mutations within the genome of a cell and all its lineages. These mutations include nucleic acid sequences, chromosomal rearrangements, or aneuploidy. Intrinsic processes and interactions with environment (sunlight, toxins, and diets) cause changes in the structure and function of our cells and molecules within them.

Aging is defined by diminished response to stress, escalation of homeostatic imbalance and an enhanced threat from aging-related pathologies. The endpoint of aging is death. The differential rate of aging determines the variable life span in different species.

There is a closely related, but a distinct term that one should be aware of while learning about aging.

This physiological process is characterized by a loss of a cell’s divisibility and growth potential with a decline in its functionality as a whole entity. It is a step towards cellular death. An essential degenerative feature; there are no positive annotations to it.

Classification of Genome Instability and Aging

Aging can be simply classified as follows:

The rather old, quintessential theories of aging can be summarized as follows:

The current theories and their sub-components hypothesized to elucidate aging can be tabulated as follows:

Albeit not having a definitive single theory to unravel the mysteries of aging, there are numerous traits identified which all compel the cell towards self-destructive pathways ultimately resulting in cellular death. They can be summarized as follows:

Genomic instability is a primary hallmark of cellular damage. Other potential causes are often segregated into antagonistic and integrative hallmarks.

There is abundant evidence in the literature to suggest a pivotal role of DNA-protein complex in mediation of decline in vitality of a cell over time.

Aging in Saccharomyces cerevisiae is dominated by chromatin reorganization and alteration of the genome. The strict regulation of DNA mismatch repair and breaks, highly supervised DNA replication and decoding into proteins and the enormous amount of ever-growing evidence to link DNA management errors with the alteration of cellular pathways essential to survival has reinvigorated the interest of geneticists in unraveling the link between genomic instability and aging.

Bodies accumulate genetic damage throughout our lifetimes. The most important spheres of changes extensively studied in this perspective are:

There is a documented increase in micronuclei, sister chromatid exchange and sex chromosome aneuploidy in humans as they age. Changes in DNA can bring about genomic instability.

Werner syndrome is an illustration of premature aging associated with genomic instability. The WS gene located at 8p12 is responsible for the production of an enzyme similar to the DNA helicase enzyme which ensures the maintenance of integrity of the genome. Aberrant functioning of this gene results in premature aging and a predisposition to the development of cancer.

Eukaryotic DNA is safeguarded by a close association with histone protein and the aggregation of DNA with histone constitutes chromatin. Chromatin is systematically organized in a disciplined way. The same is termed as ‘nuclear architecture’ and it optimizes the functioning of various genes involved in similar pathways by eliminating the spatial separation between them by uniquely folding and twisting in the real space.

Being an adored, revered and highly protected entity, DNA is a critical desideratum for damage and harm. Elaborate DNA repair mechanisms exist. The infidelity and accuracy demonstrated by these cellular cascades are transcendent. 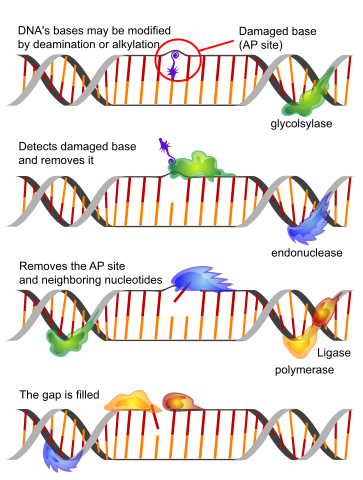 Image: “Base excision repair is one of the simplest forms of DNA repair. The image here shows it in its shortest version.” by LadyofHats – Own work based on others. License: Public Domain

However, there exists an infinitesimal, but a definite proportion of DNA damage that does not yield to repair and rectification. Also, the extensive elaborate highly efficacious DNA repair machinery itself is susceptible to the changes of age-related deterioration and dysfunction. The key components of DNA repair armamentarium that are implicated in bringing about cellular aging are the following:

Genome is a vulnerable valuable source of information for a cell that has to be safeguarded and protected. It is challenged by various threats – both from within and out. These threats can be summarized as follows:

DNA spoilage with an almost simultaneous repair is an unceasing significant highly regulated process in a cell. While most of the damage is repairable in most circumstances, literature provides testament to the fact that some definite amount of mutations and DNA aberrations insidiously accumulate in cells, especially the non-replicating mammalian cells.

The changes manifest as genetic mutations which ultimately bring about the downfall of the cellular machinery. This also portends to damage to mitochondrial DNA which results in dysfunction of the powerhouse of the cell with its subsequent detrimental consequences; thus, aging is proposed to result from disruption of the genetic identity of a cell.

The dysdifferentiation hypothesis of aging and cancer supplemented by the membrane hypothesis of aging excogitates that age-related depreciation of a cell’s vitality could be secondary to interaction of the genetic apparatus of the cell with nocuous agents like active oxygen species and free radicals.

There is a certain rate of error tolerance of a cell, exceeding which the cell fails in its ability to sustain and function normally. This concept is extended to aging.

Thus, accumulation of errors in the genomic replication machinery beyond a certain threshold might lead to erroneous dysregulation of the protein synthesis, folding and expression mechanisms which ultimately might bring about deterioration in the functionality of the cell.

As an extension of the theory of codon modulation about development and aging, codon restriction theory postulates a potential correlation between the infidel genetic replication and protein synthesis on one hand, and the gradual depraving changes in transfer RNA and aminoacyl-tRNA synthetase.

Cellular aging is an unraveled fascinating mystery for cell biologists and geneticists for centuries. Aging is defined by diminished response to stress, escalation of homeostatic imbalance and an enhanced threat from aging-related pathologies.

Senescence implies loss of a cell’s divisibility and growth potential with decline in its functionality.

Aging is classified as primary and secondary based on whether the final call to age is inherent to the cell or induced by external factors.

There are various theories proposed to expatiate aging, but none have ever received unequivocal applause from the scientific community. Earlier theories were mainly stochastic and programmed theories of aging. Modern theories exploit the molecular level knowledge about cellular vitality; none of the theories is exclusive of the others. Their cumulative infliction upon the cell might be the potential reason behind the deterioration of a cell’s function and progression towards death.

Various physiological traits of aging have been described. Genomic instability has cherished a crucial pedestal in the development of aging.

There are various levels at which genomic instability can occur, from DNA basic structure to the nuclear architecture.

There are various modes of threats to the cellular genome. The same are segregated into exogenous and endogenous factors.

There are various mechanisms described underlying genome instability. Somatic mutations, dysdifferentiation, the error catastrophe, codon restriction are some of the few significant ones among many. 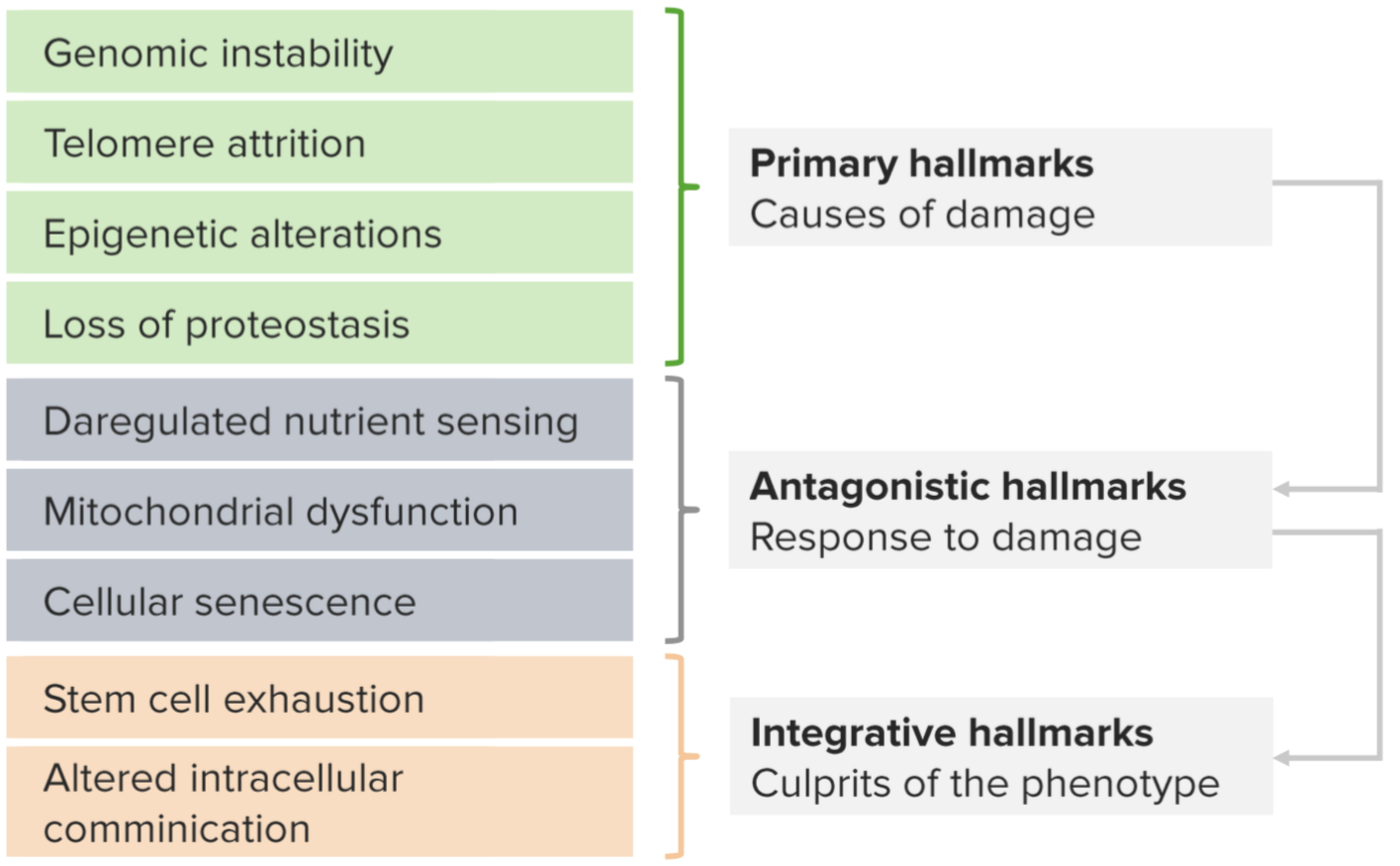 Orgel, L. E. 1970. The maintenance of the accuracy of protein synthesis and its relevance to aging: a correction. Proceedings of the National Academy of Science USA. 67:1476.