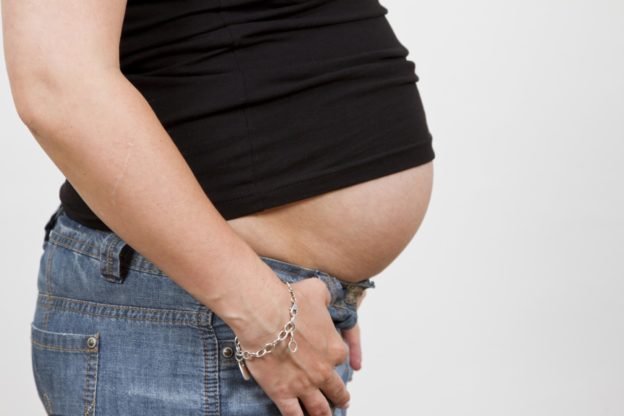 Twins and multiple pregnancies may be:

Pathogenesis and formation of monozygotic multiples

For the formation of monozygotic multiples, the fertilized ovum (zygote) must be cleaved in the course of its development. This can take place at 3 different times: 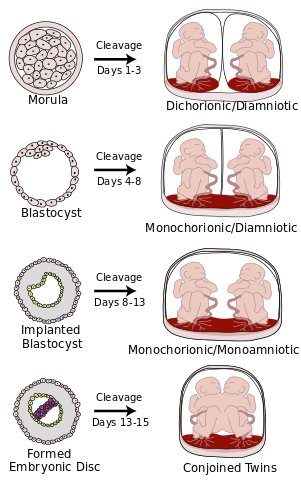 The first time the egg-cell may separate takes place on the first day or before the 3rd day; namely in the 2-cell stage. The zygote has already completed the first division; this means that the zygote has divided very rapidly without the new formation of cell material. It has thus divided without changing its size. The 2 cells resulting from this division can develop further independently and form 2 blastocysts. This results in the formation of separate/fused placentas i.e. 2 chorions and 2 amnions. Thus, diamniotic dichorionic multiples are formed. They resemble dizygotic twins and represent one-third of monozygotic twins.

The next time the zygote can separate is in the early blastocyst stage. During this stage, the first cell differentiation has already taken place. The external cells of the morula, now formed by many divisions, form an epithelium-like complex, which later becomes the trophoblast, while the inner cells remain together in a cluster of cells called the embryoblast.

The last time separation can occur is as a two-leaved germinal disc which occurs in day 8–13 of development. The blastocyst has already entered the uterus. For this, the trophoblast is invasively growing into the mucous membrane of the uterus. The outer part dissolves its cell borders and becomes the syncytiotrophoblast. The inner part of the trophoblast retains its structure and is now called the cytotrophoblast. The cells of the embryoblast are now differentiated into 2 cell layers: the highly cylindrical epiblast which forms the amniotic cavity and the hypoblast which forms the yolk sac.

The 2 cell layers lie on one another at a site called the germinal disc. From this disc, the actual embryonic body develops. This development begins with gastrulation, in which cells from the epiblast migrate between the 2 discs. The transformation and migration of these cells lead to the formation of the primitive strip, which, for the first time, gives the embryo a caudal and cranial end by the subsequent formation of the chorda dorsalis.

If several primitive streaks develop, monochorionic-monoamniotic multiples develop. This is the only form of multiples which, due to their narrow localization in case of a faulty closure of the body wall, can lead to duplications or the so-called Siamese twins/conjoined twins.

Division beyond day 15 of development results in incomplete twinning.

Due to their early division, dichorionic-diamniotic multiples undergo ‘normal’ development. Each child has its own placenta, its own chorionic cavity, and its own amniotic cavity. If the blastocysts nest very close to one another during pregnancy, the placentas may be fused. Anastomoses may form between the different chorion vessels.

Monochorionic-diamniotic multiples develop from 2 embryoblasts within a trophoblast. As the placenta is formed later, it is logical that these multiples share a placenta and a chorionic cavity. However, they have their own amniotic cavity.

Monochorionic-monoamniotic multiples are separated only after the formation of the amniotic cavity and the yolk sac but within a trophoblast. These multiples, therefore, have a common placenta, chorionic cavity, and amniotic cavity. 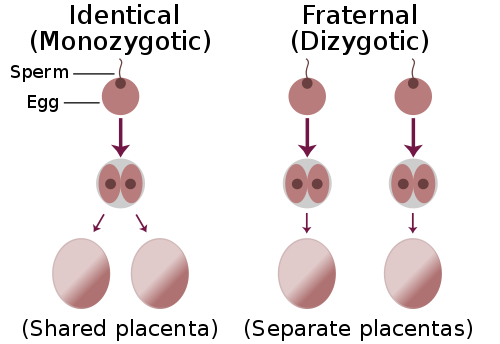 Dizygotic multiples are described as 2 or more children who have developed from several oocytes fertilized by different sperms within a pregnancy. They have different genomes and are therefore similar to siblings born at different times. They can even be fertilized by sperms from different men since sperms can remain functional for up to 5 days in the uterus.

If 2 oocytes ovulate simultaneously and are fertilized by 2 different sperms, twins are formed. If one of the zygotes divides, triplets (1 in 40,000) develop. If both zygotes divide, they form quadruplets (1 in 13,000,000 is accurate). In rare cases, it can also happen that one of the fertilized eggs divides several times. This can lead to an even higher number of multiples.

It should be noted, however, that multiples, which have been produced by the division of the zygote, are monozygotic multiples. The above-described forms of multiples are, therefore, more precisely mixed forms. Thus, the said triplets are dizygotic twins, and 1 of the 2 twins has split off a monozygotic twin.

Due to today’s possibilities of artificial insemination, the probability of multiple pregnancies has significantly increased. For example, with the use of fertility-enhancing drugs, 3 oocytes can ovulate at the same time and be fertilized by 3 different sperms. These are then trizygotic triplets. All 3 have different genotypes and can therefore also be of different sexes.

Dizygotic twins develop independently of each other in 2 different oocytes. Therefore, both embryonal states form their own membranes: each child has its own placenta, as well as its own amnion and chorionic cavity. If the 2 embryos are very close to one another, the placentas may be fused together, as in the case of dichorionic-diamniotic multiples. Similarly, anastomoses can arise between the chorionic vessels.

Two-thirds of all twins are dizygotic twins. Their frequency among the multiples is, therefore, the highest and even increases with the age of the mother. While the birth rate of monozygotic multiples has remained more or less constant over the years, the number of dizygotic multiples has risen significantly in industrialized countries in the last decade. This can be mainly attributed to artificial fertilization, which often transfers 2 or even more fertilized eggs into the uterus to increase the chance of success. Other types of fertility treatment have contributed to the increase in dizygotic multiple pregnancies in affluent countries.

Investigations show that only about 29% of all twin pregnancies result in twin births. This dysfunction of a twin during pregnancy has various causes: the death of one of the twins can, for example, be caused by unbalanced nutrient supply and resorption of the malnourished twin.

Rarer than resorption is the mummification of the twin (the fetus papyraceus). In about 10% of cases of a common chorion, a twin is not supplied enough with blood. As a result, its growth is reduced and twins of different sizes are produced (twin-twin transfusion syndrome).

In a few cases, fetal inclusion or fetus in fetu may occur. Here, one of the twins is incorporated into the other. After inclusion, the fetus in fetu ceases to grow normally. It usually remains undetected for a long time, unless the surviving twin has problems of prematurity. However, fetal inclusion is so rare that no possible cause is known.

Mothers with suspected or confirmed diagnosis of multiple pregnancies should be admitted after showing the first signs of labor and an abdominal ultrasound performed to ascertain the position of each fetus as well as to estimate the weight of each fetus.

Delivery is either via

C-section in case of:

Vaginal delivery in case of: