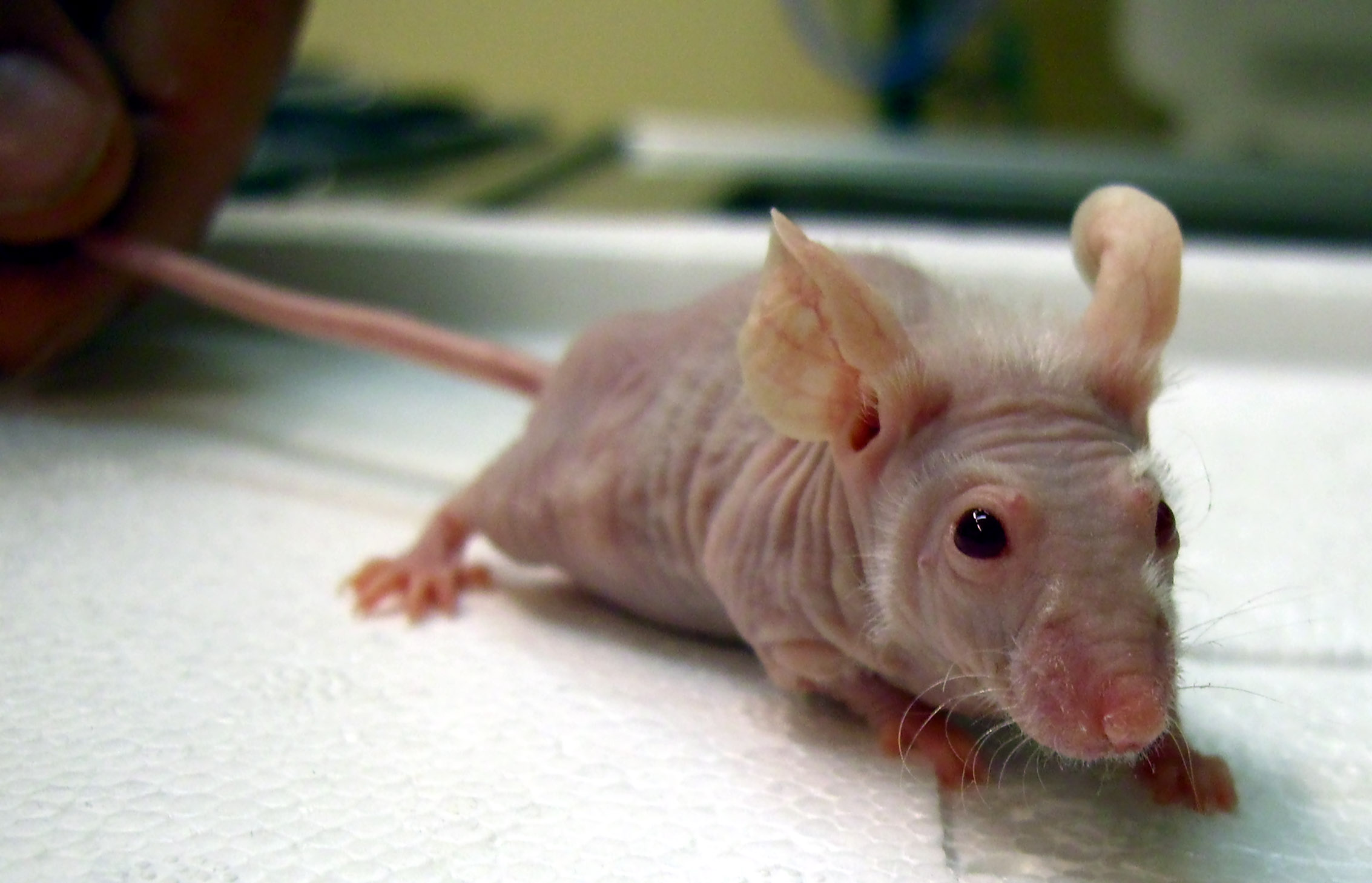 The standard genetic code is a unique set of rules which assign groups of nucleotides, called codons, in an mRNA to amino acids in a protein. Codons tend to be similar when these are meant to create similar amino acids. This indicates that our genetic code evolved to minimize the costs of amino acid replacements in proteins, caused by mutations or translational errors. 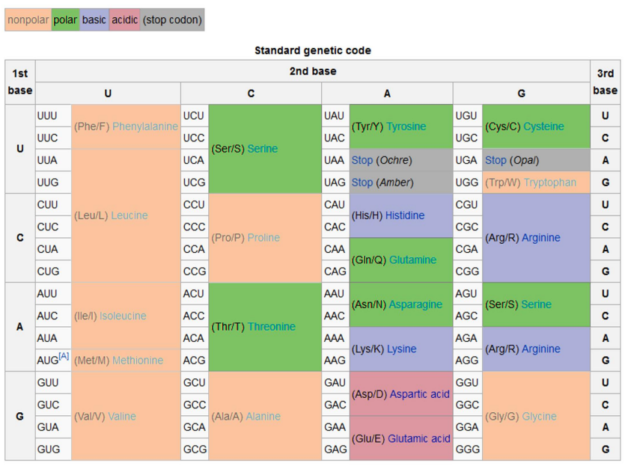 A gene mutation is a permanent change in the sequence of DNA that composes a gene. The alteration leads to a dysfunction in the protein or enzyme to be created, possibly leading to a disorder in the individual. 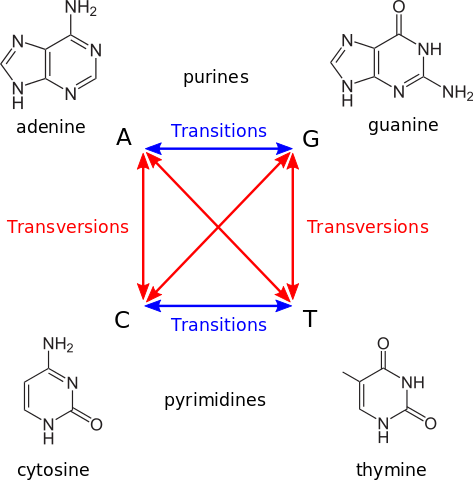 The simplest types of mutations switch one type of base to another. These are called transitions or transversions. Transitions are pyrimidine-to-pyrimidine and purine-to-purine substitutions, such as T to C and A to G; and transversions are pyrimidine-to-purine and purine-to-pyrimidine substitutions, such as T to G or A and A to C or T. Mutations that alter a single nucleotide are called point mutations.

More drastic changes to the DNA sequence are caused by extensive insertions and deletions, or large rearrangements of chromosome structure. These can be caused by the insertion of a transposon, inserts thousands of nucleotides of foreign DNA into the coding or regulatory sequences genes, as well as cellular recombination processes.

The 3’à5’ exonuclease component of the replisome has a proofreading mechanism, which accounts for its high degree of accuracy during DNA replication, allowing it to remove incorrectly placed nucleotides. This proofreading improves the fidelity of DNA replication by a factor of 100, but is not foolproof, as some misincorporated nucleotides escape detection and become a mismatched between the newly synthesized strand and the template strand.

Because mismatches are transient (they are eliminated following the second round of replication when they result in mutations), the mismatch repair system must rapidly find and repair mismatches. Second, the system must correct the mismatch accurately; in other words, it must replace the misincorporated nucleotide in the newly synthesized strand and not the correct nucleotide in the parental strand.

Mutations arise not only from errors in replication but also from damage to the DNA itself. Environmental factors, such as radiation and chemical agents also cause DNA damage, as well as increase the frequency of mutations.

The most frequent and important kind of hydrolytic damage is deamination of cytosine. Under normal physiological conditions, cytosine undergoes spontaneous deamination, to create uracil in DNA. Uracil preferentially pairs with adenine and thus introduces that base in the opposite strand upon replication, rather than the G that would have been directed by C.

Adenine and guanine are also subject to spontaneous deamination. Deamination converts adenine to hypoxanthine, which hydrogen bonds to cytosine rather than to thymine; guanine is converted to xanthine, which continues to pair with cytosine, although with only two hydrogen bonds. DNA also undergoes depurination by spontaneous hydrolysis of the N-glycosyl linkage, and this produces an abasic site (deoxyribose lacking a base) in the DNA.

Notice that all of these hydrolytic reactions result in unnatural alterations to the DNA. Aprinic sites are unnatural, and each of the deamination reactions generates an unnatural base. This situation allows changes to be recognized by the repair systems. This also explains why DNA has thymine instead of uracil. If DNA naturally contained uracil instead of thymine, then deamination of cytosine would generate a natural base, which the repair systems could not easily recognize.

The hazard of having deamination generate a naturally occurring base is illustrated by the problem caused by the presence of 5-methylcytosine. Human DNA frequently contains 5-methylcytosine in place of cytosine as a result of the action of methyltransferases. This modified base has a role in transcriptional silencing.

Deamination of 5-methylcytosine generates thymine, which obviously will not be recognized as an abnormal base and, following a round of DNA replication, can become fixed as a C-to-T transition. Methylated Cs are hot spots for spontaneous mutations in human DNA.

DNA is also vulnerable to damage from alkylation, oxidation, and radiation. In alkylation, methyl or ethyl groups are transferred to reactive sites on the bases and to phosphates in the DNA backbone. Alkylating chemicals include nitrosamines and N-methyl-N1-nitro-N- nitrosoguanidine. One of the most vulnerable sites of alkylation is the keto group at carbon atom 6 of guanine. The product of this methylation, O6-methylguanine, often mispairs with thymine, resulting in the change of a G:C base pair into an A:T base pair when the damaged DNA is replicated.

DNA is also subject to attack from reactive oxygen species (for example, O2 , H2O2, and OH+). These potent oxidizing agents are generated by ionizing radiation and by chemical agents that generate free radicals. Oxidation of guanine, for example, generates 7,8-dihydro-8-oxoguanine. This adduct is highly mutagenic because it can base-pair with adenine as well as with cytosine.

If it base-pairs with adenine during replication, it gives rise to a G:C to T:A transversion, which is one of the most common mutations found in human cancers. Thus, perhaps the carcinogenic effects of ionizing radiation and oxidizing agents are partly caused by free radicals that convert guanine to this adduct.

Another type of damage to bases is caused by UV light. Radiation with a wavelength of 260 nm is strongly absorbed by bases, one consequence of which is the fusion of two pyrimidines that occupy adjacent positions on the same polynucleotide chain. In the case of two thymines, the fusion is called a thymine dimer, which comprises a cyclobutane ring generated by links between carbon atoms 5 and 6 of adjacent thymines.

In the case of thymine adjacent to cytosine, the resulting fusion is a thymine-cytosine adduct in which the thymine is linked via its carbon atom 6 to the carbon atom 4 of cytosine. These linked bases are incapable of base pairing and cause the DNA polymerase to stop during replication.

Intercalating agents are flat molecules that containing several polycyclic rings that bind to the equally flat purine or pyrimidine bases of DNA. This occurs just as the bases bind or stack with each other in the double helix. Example compounds are proflavin, acridine, and ethidium; which cause the deletion or addition of a base pair or even a few base pairs. When such deletions or additions arise in a gene they can have profound consequences on the translation of its mRNA, because they shift the coding sequence out of its proper reading frame.

Damage to DNA can have two consequences. Some kinds of damage, such as thymine dimers or nicks and breaks in the DNA backbone, create impediments to replication or transcription. Other kinds of DNA damage create altered bases that have no immediate structural consequence on replication but instead cause mispairings; which can result in a permanent alteration to the DNA sequence after replication.

For example, the conversion of cytosine to uracil by deamination creates a U:G mismatch, which, after a round of replication becomes a C:G to T:A transition mutation on one daughter chromosome. Cells possess elaborate mechanisms to identify and repair DNA damage before it blocks replication or causes a mutation. Cells would not endure long without such mechanisms. 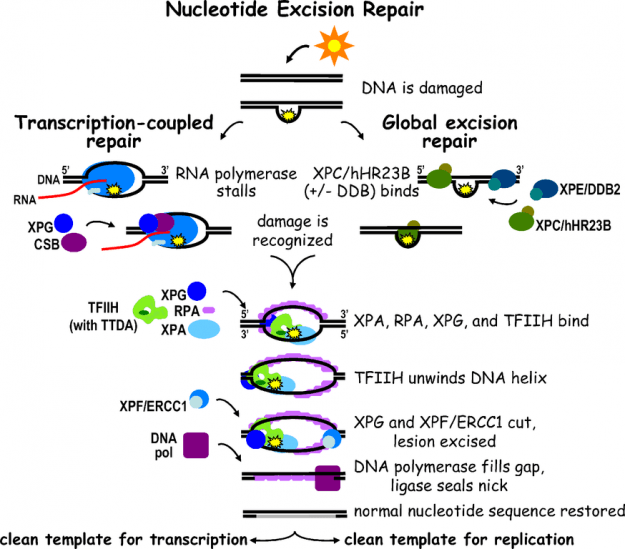 Image: “When DNA is damaged by sunlight, the damage is recognized differently depending on whether the DNA is transcriptionally active (transcription-coupled repair) or not (global excision repair). After the initial recognition step, the damage is repaired in a similar manner with the final outcome being the restoration of the normal nucleotide sequence. A more detailed description is provided in the text.“ by Jill O. Fuss, Priscilla K. Cooper. License: CC BY 2.5

An even more elaborate system is recombinational repair, which is used when both strands are damaged. In this case the DNA is broken. One strand cannot serve as a template for the repair of the other. Hence, in recombinational repair (also called double-strand break repair), the sequence information is retrieved from a second undamaged copy of the chromosome.

Finally, when damaged bases block the progression of a replicating DNA polymerase, a special translesion polymerase copies across the site of the damage in a manner that does not depend on base pairing between the templates and newly synthesized DNA strands.

Photoreactivation directly reverses the formation of pyrimidine dimers that result from ultraviolet irradiation. In photoreactivation, the enzyme DNA photolyase captures energy from light and uses it to break the covalent bonds linking adjacent pyrimidines

In base excision repair, an enzyme called a glycosylase recognizes and removes the damaged base by hydrolyzing the glycosidic bond. The resulting abasic sugar is removed from the DNA backbone in a further endonucleolytic step. Endonucleolytic cleavage also removes apurinic and apyrimidinic sugars that arise by spontaneous hydrolysis. After the damaged nucleotide has been entirely removed from the backbone, a repair DNA polymerase and DNA ligase restore an intact strand using the undamaged strand as a template.

Cloning and Detection of Gene Mutations

Cloning in natural biological function is the process of producing similar populations of genetically identical individuals that occurs in nature when organisms reproduce asexually.

Cloning in biotechnology refers to processes used to create copies of either piece of DNA, whole cells (cell cloning) or complete organisms.

Cloning a single-celled organism to derive a population of cells from a single cell. Cloning stem cells used to create cloned human embryos in what is termed ‘therapeutic cloning’. Organism cloning (reproductive cloning) creates a new multicellular organism, genetically identical to another, e.g. Dolly the sheep in 1996.