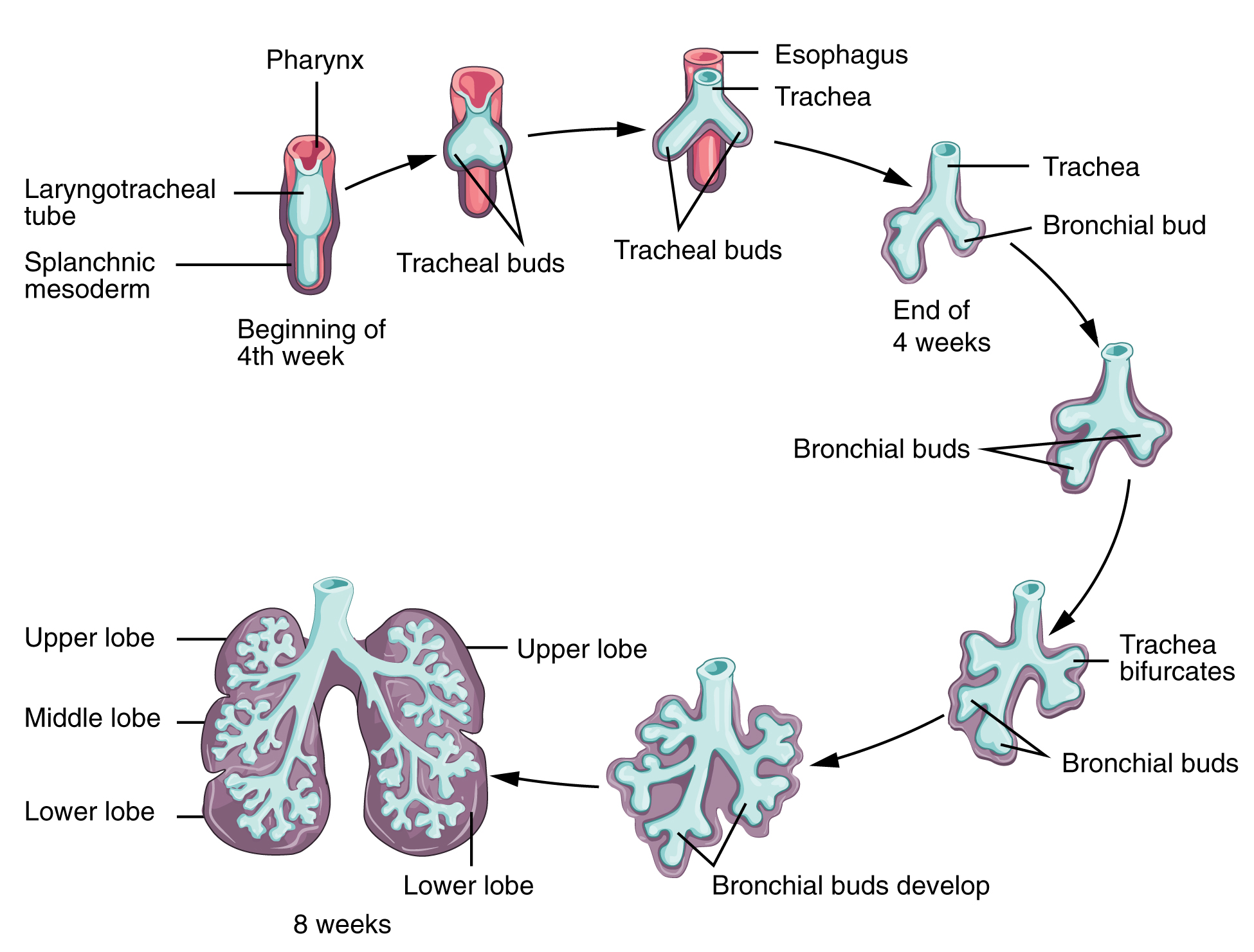 Development of the Gastrointestinal Tract

Embryonic origin of the gastrointestinal tract 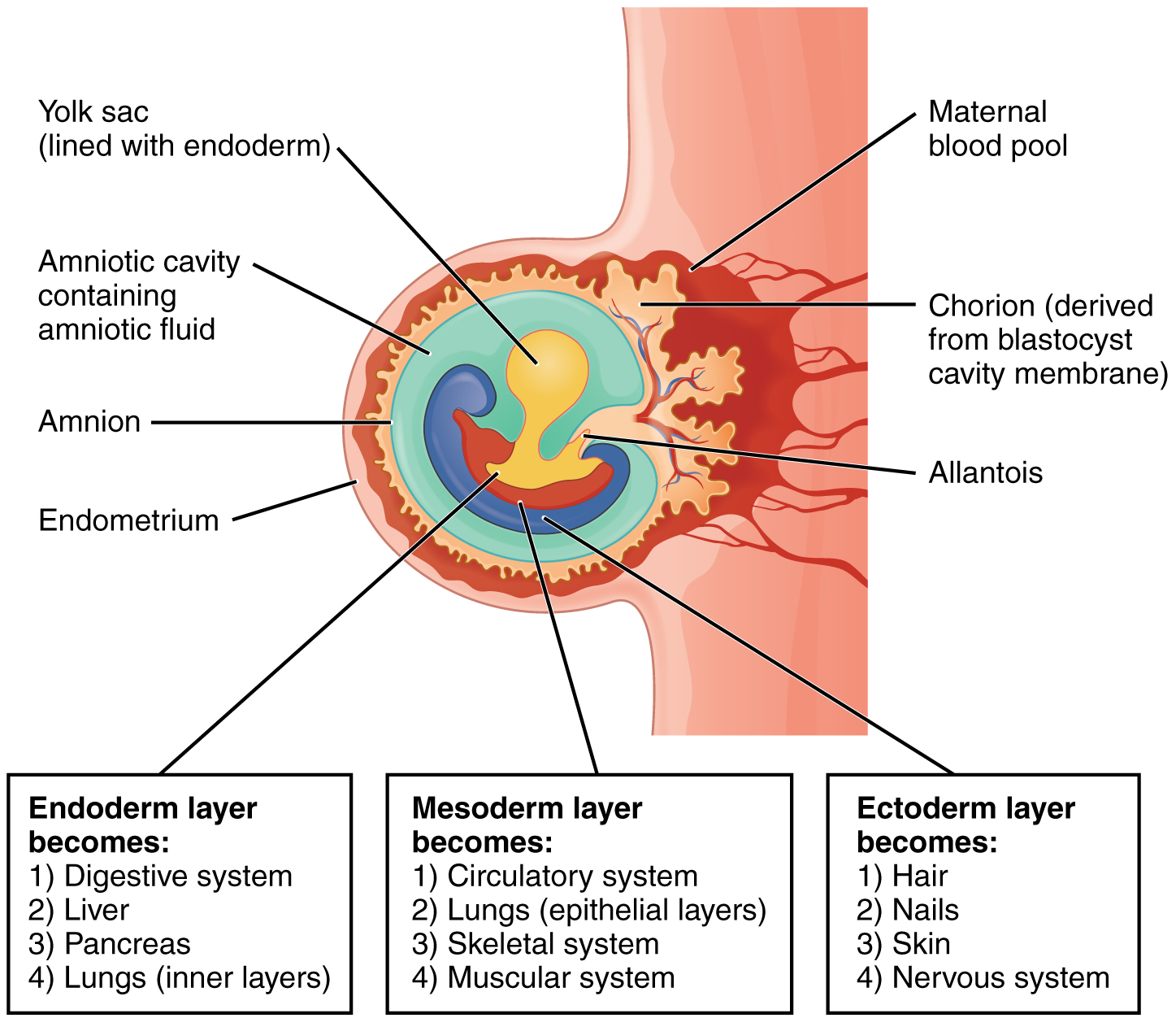 Image: Fates of germ layers in embryo. By philschatz, License: CC BY 4.0

Approx. on the 23rd day of development, the folding of the embryonic disc takes place, separating part of the yolk sac. At the time of the formation of the embryo, the endoderm gives rise to the primitive gut tube – the origin of the entire gastrointestinal tract, as well as other organs, such as the liver and lungs. The gut tube is incorporated into the growing embryo, which means that the gut can develop within the emerging peritoneal cavity. The gut tube is folded into a blind-ended tube. Its cranial end terminates blindly at the oropharyngeal membrane (membrana buccopharyngea) and its caudal end terminates blindly at the cloacal membrane. The gut tube can be divided into 4 sections:

Development of the peritoneal cavity and mesentery

Body cavities, or celoms, are ‘spaces’ within the embryo lined with a serous membrane (or serosa). The emergence of a really big space is pathological and might occur, for example, through an influx of air or blood. In the physiological state, the parietal serosa, deriving from the mesoderm of the body wall, and the visceral serosa from the mesoderm of the organ wall, are closely associated with each other. The parietal serosa lines the abdominal wall, while the visceral serosa covers the intestinal wall.

Pericardioperitoneal canals (celomic openings) extend along the intestinal tube and connect the pericardial cavity with the peritoneal cavity. The lateral folding of the embryo results in the growth of pleuropericardial folds on both sides of the intestinal tube. These are flaps that converge anteriorly and posteriorly with the intestinal tube; dorsally, only a narrow fold of tissue remains. This connection between the eventual intestine and abdominal cavity is called the mesentery. Mesenteries are covered with visceral serosa, connect organs to each other or to the abdominal wall, and conduct associated nerves and blood vessels.

The dorsal mesentery associated with ascending and descending colon coalesces later with the posterior abdominal wall and then becomes retroperitoneal. This gives rise to the root of the mesentery (radix mesenterii), which attaches the small intestine to the dorsal body wall. It extends from the upper left corner of the junction between duodenum and jejunum (duodenojejunal flexure) to the bottom right junction between ileum and colon (ileocecal junction). At the transverse colon, the root of the transverse mesocolon and, attached to the sigmoid colon, the mesosigmoid arises.

Organs of the upper abdomen 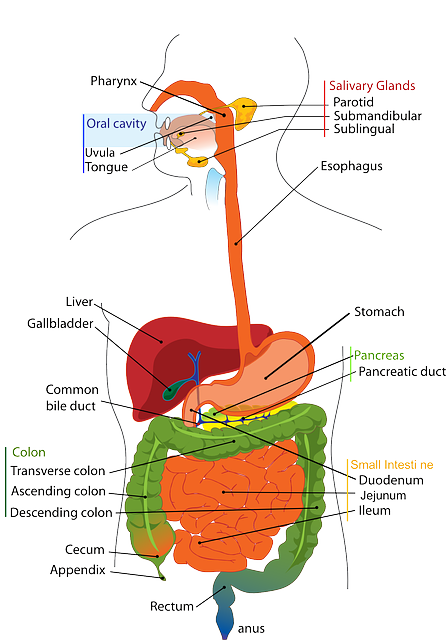 Image: The organs of the upper abdomen. By Clker-Free-Vector-Images, License: Public domain

Considering the location of the stomach within the embryo, the descent can be noted. On day 32, the stomach is level with the 7th cervical vertebra. On day 50, it reaches its final position between the 11th thoracic and 3rd lumbar vertebrae. During the process, the stomach is shifted towards the left and the pylorus is brought into a horizontal position. Thus, on the right side, a space for the developing liver and pancreas is created as a budding from the duodenum.

Development of the pancreas

From day 26 and on day 28, 2 pancreatic buds develop, which eventually fuse to form the exocrine pancreas. It is only based on the later duct system that these 2 primordial (dorsal and ventral) portions can still be distinguished. In week 9, the endocrine parts of the pancreas (islets of Langerhans) arise from the endocrine cells of the pancreatic epithelium. The pancreatic islets already synthesize hormones during the fetal period, in particular, the growth-enhancing insulin, whereas, the exocrine pancreas becomes functionally active only after birth.

Development of the liver

The liver starts to develop from the 25th/26th day. It is the most important hematopoietic organ of the embryo and fetus. Gland-like epithelial liver cords and the excretory duct system (later referred to as the biliary system) arise from another epithelial bud (liver bud or hepatic diverticulum). Hematopoietic stem cells are embedded in the fast-growing mesenchymal tissue located between the epithelial liver cords.

In the 2nd half of pregnancy, hematopoiesis is downregulated and the development of hepatocytes is facilitated. Epithelial liver cords develop gradually into the typical hepatic lobules. The liver reaches its full and versatile metabolic capacity only after birth when the intestine is also fully developed. Prenatally, the liver is responsible for the degradation of fetal hemoglobin, causing the dark coloring of the meconium – the 1st bowel movement of the neonate.

Organs of the lower abdomen

In the lower abdomen, the midgut gives rise to the small and large intestines. To understand how both reach their final position within the abdominal cavity, one has to consider the rotation of the umbilical loop.

Image: Embryology of dorsal mesoesophagus, mesogastrium, and ligaments of the stomach. By Openi, License: CC BY 2.0

On the 32nd day approximately, the midgut forms the umbilical loop, which is supplied by the superior mesenteric artery in the dorsal mesentery. This artery now serves as the axis of rotation. The small intestine located cranial to the loop grows faster than the caudally located large intestine. The small intestine initially extends into the umbilical coelom, and, at a later stage, once the abdominal cavity is large enough, shifts inwards again. This is referred to as physiologic herniation. 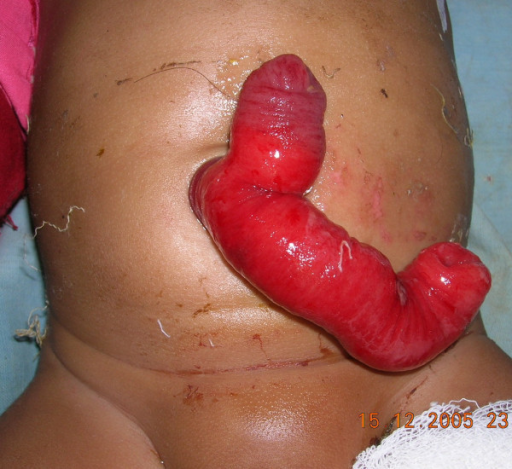 Image: The bowel was not completely relocated before birth back into the abdominal cavity. By Openi, License: CC BY 2.0

Functional development of the intestine

Development of the Bronchial System

Although the lung is not needed before birth, its complex development begins during the embryonic stage. The lung emerges as the budding of a part of the embryonic gut tube and, therefore, from an evolutionary point of view, belongs to the endoderm. In the following section, the stages of lung development are presented concisely in 5 developmental stages:

The lower respiratory organs arise from the laryngotracheal groove. This median longitudinal epithelial groove begins to form during the 4th week at the bottom end of the pharyngeal gut. The epithelial layer, the glands of the endodermal respiratory tract, and the alveolar epithelium of the lung arise from the endodermal epithelium of the laryngotracheal groove. Mesenchymal cells give rise to musculature, cartilage, and other connective tissue of the lung.

The lung bud divides into 2 primary bronchial buds, later corresponding to the left and right lungs. At this stage, the right bronchial bud is already bigger and facing caudally. The right lung is eventually larger than the left lung. Gradually, as a result of uneven, dichotomous divisions, the main bronchi, lobar bronchi, and segmental bronchi develop.

By the end of the 5th week, the necessary cavities for directing air have been developed. Now, the anatomical and histological structures develop, which allow the exchange of gas between air and blood.

From week 6–16, the lobules (acini) and terminal bronchioles, which form the bronchial tree of the lungs, develop. The lobules are structurally similar to a gland, which is why this stage is referred to as the pseudo-glandular stage. At this stage, the blood-air barrier has not yet been formed, and at this stage, the fetus would not be viable at birth.

In the 16th–26th week, the respiratory part of the lung, the respiratory bronchioles, is formed. From here, the canaliculi or tubules branch, which is later referred to as alveolar ducts. Simultaneously, vascularization of the surrounding mesenchymal tissue takes place. At the end of the canaliculi, the 1st primitive alveolar sacculi develop. This development continues into the next stage.

From the 26th week until birth, more terminal saccules are formed. Their epithelium is initially cubic, and then differentiates into the thin squamous epithelium and ultimately into the typical thin type I pneumocytes. In addition to type I pneumocytes, type II pneumocytes are sporadically formed and are responsible for the secretion of surfactant. Surfactant reduces the surface tension of the alveoli and prevents the lung from collapsing. Sufficient production of surfactant, however, is achieved only shortly before birth. It is vital and a lack of it often creates a problem for premature babies. At the same time, the capillary network grows quickly and forms dense networks around the terminal saccules, as a result of which the blood-air barrier develops.

From the 32nd week, the epithelium of the alveolar sacs thins further. Now, the capillaries push into ductus and sacculi, while the primitive alveoli bulge into the connective tissue. They form the functional respiratory membrane, but they only turn into mature alveoli once they have been exposed to air. The lung continues to develop after birth. Whilst there are 50 million alveoli at birth, these immature alveoli multiply during the 1st 8 years of life to about 300 million mature alveoli.

Pulmonary function during and after pregnancy

Respiration is not required in intrauterine life, yet the lung fulfills an important task. It produces part of the amniotic fluid. Every day, about 15 ml of amniotic fluid per kilogram of body weight is generated within the embryo. From birth, a healthy lung is responsible for oxygen supply. Its maximum capacity is reached during the 1st few years of life.

Singh, I. (1978). An introduction to human embryology for medical students. London: Macmillan Press.