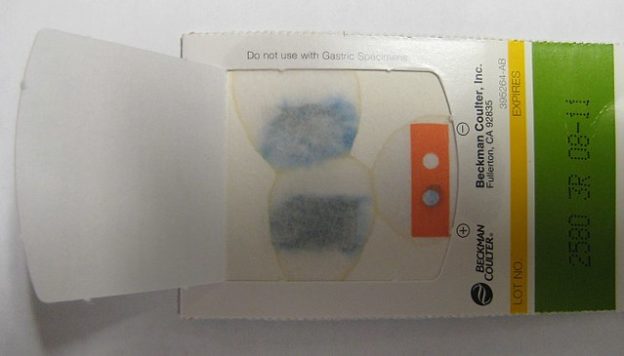 Definition and Background of Gastrointestinal Bleeding

NSAIDs inhibit cyclooxygenase, which results in decreased synthesis of mucosal prostaglandin and leads to impaired mucosal defenses. There is a 40-fold increase in the risk of developing a gastric ulcer (leading to gastrointestinal bleeding) in patients who use NSAIDs on a daily basis, and the risk of duodenal ulcer formation increases to 8-fold in these patients.

The majority of patients presenting with upper gastrointestinal bleeding suffer from peptic ulcers. As the ulcer gets deeper into the mucosa, it causes weakening and necrosis of the arterial wall, eventually resulting in bleeding.

The upper stomach and the lower esophagus are inverted forcefully during vomiting, which may lead to a mucosal tear in one of these parts. The severity of the bleeding is determined by the depth of the tear in the mucosa. Sometimes, in rare cases, an esophageal rupture may occur, leading to a condition called Boerhaave syndrome. 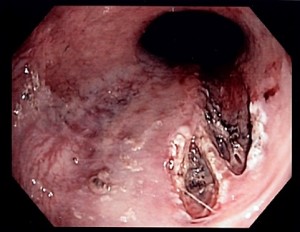 Different predisposing clinical conditions, such as multiple trauma, shock, acute renal failure, and respiratory distress syndrome, may have the potential to alter the protective barriers of the mucosa.

It is important to do a thorough physical examination in order to evaluate for shock or blood loss. Blood pressure and pulse should be checked for patients presenting with upper GI bleeding. A physical examination should also include looking for signs of liver disease, such as gynecomastia, splenomegaly, ascites and spider angioma; or signs of a tumor, such as abdominal mass, nodular liver, and enlarged lymph nodes.

A thorough history and physical examination are important in patients presenting with symptoms and signs of GI bleeding. It is important to ask about comorbid diseases, medications use, exposure to toxins, as well as the course of the symptoms.

It is important to assess the level of blood loss in patients with gastrointestinal bleeding through a complete blood count with platelet count and differential. Patients should be assessed for a hemorrhagic shock as it has a high mortality risk up to 30%. Hemorrhagic shock can be classified into four classes based on the detected signs: 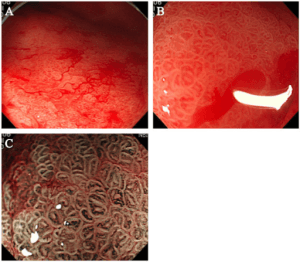 Image: “ Esophagogastroduodenoscopy (EGD) when the patient presented with gastrointestinal bleeding. (A) Esophagogastroduodenoscopy revealed diffuse mucosal bleeding of the antrum that resembled gastric antral vascular ectasia. (B) Magnifying endoscopy (ME) findings. The gastric mucosa was friable, and oozing bleeding occurred from ectatic vessel rupture. (C) ME with narrow-band imaging revealed congestive and dilated subepithelial capillaries in the background mucosa.” by openi. License: CC BY 2.0

Blood type and crossmatch should be ordered, depending on the clinical assessment and the initial hemoglobin level of the patient. Because of hypovolemia and hypoperfusion, patients with GI bleeding usually require blood transfusions.

It is essential to evaluate for renal comorbidity using the basic metabolic profile (BMP). However, BUN levels may be elevated as a result of the blood in the upper intestine.

Using endoscopy is very useful in both the diagnosis and management of GI bleeding. It can be used to detect the source of bleeding and manage it.

Different conditions can be evaluated using CT scanning and ultrasonography, such as liver cirrhosis, cholecystitis, pancreatitis with hemorrhage and pseudocyst, aortoenteric fistula, or other uncommon causes of gastrointestinal bleeding.

If endoscopy fails to identify the source of bleeding, then angiography can be useful in case the bleeding persists.

It is an important procedure used to confirm possible active bleeding or recent bleeding. The nasogastric tube can also reduce the chance of vomiting in patients.

Correction of the shock and coagulation abnormalities in order to stabilize the patient is the main goal in management.

Treatment with high doses of proton pump inhibitors helps decrease the risk of needing endoscopy as a treatment procedure. PPIs maintain the level of gastric pH above 6, which protects an ulcer clot from fibrinolysis.

It is considered the method of choice in controlling hemorrhages from active ulcers. Seven techniques can be used in therapeutic endoscopy, which are: