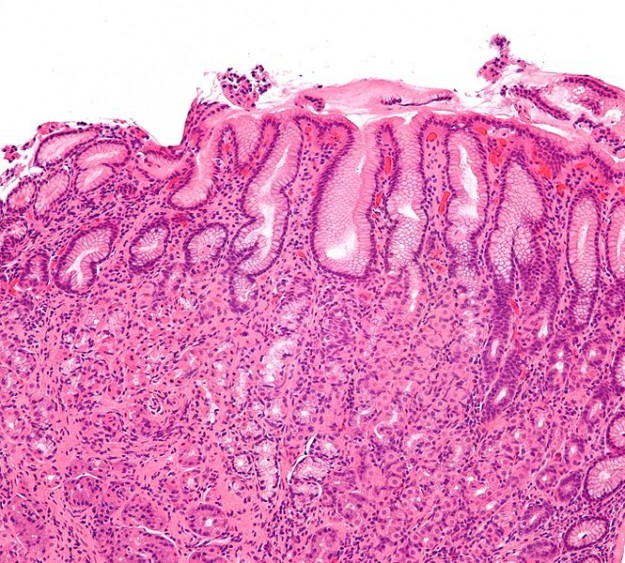 Various endogenous and exogenous factors may lead to acute gastritis. Portal hypertension, for instance, may cause gastritis. Stress, however, be it psychological or physical, is also considered to be 1 of the main triggers of acute gastritis. This includes burns, shock, traumas, stress after surgery or stress in competitive athletes which is commonly referred to as ‘runner’s stomach’. 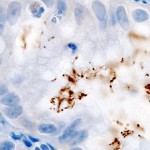 Image: Histopathology of Helicobacter pylori infection in a gastric foveolar pit demonstrated in the endoscopic gastric biopsy. By KGH, License: CC BY 3.0

Exogenous causes may be chemical/toxic, such as excessive alcohol use, alimentary excesses, severe smoking, as well as pharmacological therapy with nonsteroidal anti-rheumatic drugs (i.e. ASS), corticosteroids, and cytostatic drugs. It may also have infectious causes, especially pathogens like Helicobacter pylori, Candida albicans, the cytomegalovirus, herpes viruses or salmonella. In patients undergoing radiation, acute gastritis may develop as comorbidity.

A so-called stress ulcer is a form of acute erosive gastritis. It develops as a result of decreased mucosal blood flow, excessive stomach acid secretion and, at the same time, reduced alkaline protection of the stomach in stressful situations. 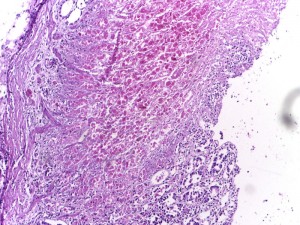 Image: Acute stress ulcer of the stomach in a postmortem specimen. By Netha Hussain, License: CC BY 4.0

Regarding the patient’s medical history, the aforementioned symptoms will be observed. During the patient’s physical examination, he will experience epigastric pain when pressure is applied to that area. To rule out gastroduodenal ulcer disease, it is necessary to perform gastroscopy and histology.

In endoscopic imaging, acute gastritis will present as edematous gastric mucosa, leukocytes infiltrating the mucosa, and possibly superficial mucosa defects. In cases of more severe defects such as erosions, this is referred to as erosive gastritis. One of the most feared complications of erosive gastritis is bleeding.

To eliminate exogenous toxic substances is the most important measure when treating acute gastritis. Fasting and bed rest may be a reasonable approach as well, followed by a light diet – coffee, alcohol, and other irritants to the mucosa must be avoided by the patient under any circumstances. Taking proton pump inhibitors until the symptoms subside is an option. Furthermore, antiemetic therapy for the treatment of nausea and spasmolytic medications are available as well. Herbal products made from chamomile, yarrow, licorice root, balm, etc. may also promote healing.

Acute gastritis, without complications, should heal on its own within a few days, which differs from the chronic form of gastritis.

In cases of chronic gastritis, there may be no clinical symptoms. Frequently, symptoms such as upper abdominal pain, bloating, and halitosis are rather non-specific.

Classifying chronic gastritis according to the ABC classification

This type of chronic gastritis is found in the gastric corpus and cardia, and shows the formation of autoantibodies to gastric parietal cells and the intrinsic factor: 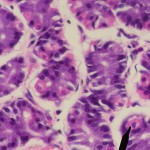 The consequences are low or no acid output, hypergastrinemia, and pernicious anemia. The causes of type A gastritis have not yet been conclusively determined. In a portion of these cases, the infection is thought to have been caused by H. pylori.

Five % of all cases of chronic gastritis have autoimmune causes.

B gastritis = Bacterial by H. pylori 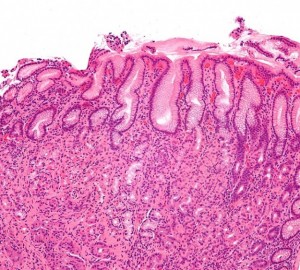 Eighty % of all cases of chronic gastritis are caused by an infection. The most common cause of type B gastritis is the urea-producing bacteria H. pylori, which colonizes a large part of the population. The bacteria are spread via oral and oral-fecal transmission and cause an infection at the antrum that ascends from there.

This results in gastric atrophy and finally hypochlorhydria (It does, however, never lead to low or no acid output as can be observed with type A gastritis!). In more than 90% of cases, so-called triple therapy consisting of 2 antibiotics and 1 proton pump inhibitor will achieve complete elimination of the bacteria.

Fifteen % of all cases of chronic gastritis are chemical/toxic.

Non-steroidal anti-rheumatic (NSAR) drugs such as diclofenac or ibuprofen and reflux of bile, i.e. following gastrectomy, may cause type C gastritis, predominantly affecting the antrum. Eliminating toxic substances and administering proton pump inhibitors results in subsiding of the inflammation. In cases of type C gastritis, there is the possibility, however, that complications such as ulcers and stomach bleeding may occur if the disease is not treated. 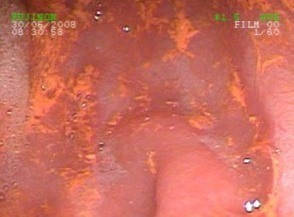 Image: Endoscopy appearance of the gastric antrum with discoloration after bromazepam intake. By Openi, License: CC BY 2.0

The diagnosis of chronic gastritis is confirmed by performing gastroscopy screening, which may show changes such as erythematous mucosa and possibly erosions. Here, histological samples are taken from the antrum and the corpus. To rule out an infection with H. pylori (HP) bacteria, the Helicobacter urease test (HUT) is performed.

Furthermore, there are non-invasive test methods such as the breath test and stool or serum antigen testing for HP available as well. Gastroscopy and testing for HP bacteria should be repeated 6–8 weeks after therapy with antibiotics has been concluded, to ensure therapy success. Type A gastritis is diagnosed by the presence of antibodies to parietal cells and intrinsic factor. In some cases, serum vitamin B12 levels may be low as well.

Type B gastritis caused by HP:

The so-called giant fold gastritis or Ménétrier disease (Morbus Ménétrier) is considered to be a complication of lymphocytic gastritis. There is also the possibility of degenerative malignancies which is why annual follow-up endoscopies are recommended. Severe forms of progression with dysplasia may necessitate a gastrectomy.

Giant fold gastritis is a form of gastritis of unknown cause. HP is again suspected to be a triggering factor.

The name of this disease is telling: the mucosal folds become enlarged, the chief and parietal cells degenerate resulting in hypoplasia and little or no acid output. This leads to excessive mucus production. In most cases, giant fold gastritis remains without symptoms. Diarrhea and intestinal protein loss with anemia and edema are rare occurrences. It is usually discovered by accident during an endoscopic examination during which the folds remain stable, even with maximum air insufflation. The folds may be removed via gastric resection.

Eosinophilic gastritis is caused by an allergic reaction or parasitic infection. Symptoms include nausea, vomiting, abdominal pain, and diarrhea. In rare instances, malabsorption and steatorrhea have been reported.

In a large part of the cases, eosinophilia and elevated serum immunoglobulin E (IgE) are present. During the histopathological examination, eosinophilic infiltration, crypt hyperplasia, villous atrophy, and ulcerations are noticeable. Dietary measures and the administration of glucocorticoids, possibly supported by low-dose maintenance therapy, will bring the progression of the disease under control.

Gastritis in the context of Crohn’s disease

During the progression of Crohn’s disease, the stomach may become affected. The causes of this are unknown.

Other causes of gastritis

Granulomatous diseases such as tuberculosis and sarcoidosis may cause gastritis as well.