Gastric cancer refers to the formation of malignant neoplasms of the stomach lining (ICD code C16).

Gastric cancer has a wide geographical variation. Previously, it was one of the most common cancers in Western Europe and the United States, but the incidence has currently declined. However, it is still common in countries such as China and Japan.

Worldwide, gastric cancer is still the 2nd most common cancer of the gastrointestinal tract. It is also the 3rd most common cause of cancer-related deaths in the world, with about 723,000 deaths worldwide.

Men are slightly more affected than women, with a peak incidence of over 50 years. Gastric cancer usually has an unfavorable prognosis because it is often diagnosed late when metastasis has already occurred due to the initial vague, nonspecific symptoms. 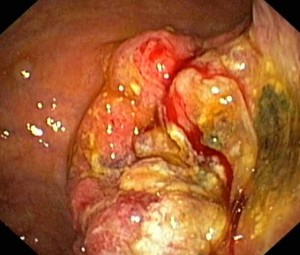 Multiple factors have been linked to the development of gastric cancer. The biggest risk factor, however, is gastritis caused by Helicobacter pylori, followed by type A gastritis. An H. pylori infection increases the risk for gastric carcinoma by 4–6 times.

Gastric cancer is linked to the consumption of certain foods, especially foods rich in nitrate, whereas foods rich in fiber and antioxidants are thought to protect the stomach. Smoking also increases the risk of gastric cancer. Furthermore, partial gastrectomy, the presence of certain gastric adenomatous polyps, and giant fold gastritis pose a certain risk for gastric cancer.

The following diseases are risk factors for gastric cancer:

Gastric cancer often remains undiagnosed for a long time due to vague nonspecific initial symptoms such as abdominal discomfort, indigestion, nausea, heartburn, bloating, decreased appetite, night sweats, fatigue, and weight loss. Sudden aversion to meat may be an indicator of gastric cancer. In many cases, however, the complications of the tumor, such as pyloric stenosis and bleeding, are the first significant symptoms of the disease.

Occasionally on clinical examination, the left supraclavicular lymph node is palpable (Virchow’s lymph node) which may be indicative of the underlying gastric cancer. Hepatomegaly and ascites may occur in advanced stages. In cases of aggressive, metastasizing growth, malignant acanthosis nigricans or cutaneous paraneoplastic syndrome may occur.

The following studies are available for diagnosing and staging gastric cancer:

The tumor markers CA 19-9, CA 72-4, and CEA are relevant for monitoring the progression of the tumor and the treatment response.

Location and spread of gastric cancer

Gastric cancer is most commonly located in the antrum and pylorus, followed by the lesser curvature and cardia. 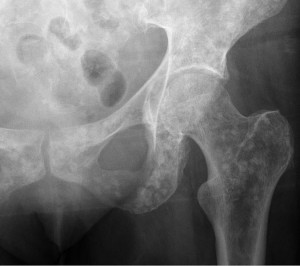 The Lauren classification groups gastric cancers according to their histological growth pattern into 2 main types:

In some gastric cancers (5%), the stomach becomes rigid, thickened, and leather-like (linitis plastica). This is due to extensive infiltration by the malignant cells. Patients with this presentation have an extremely poor prognosis. 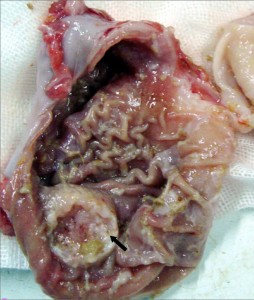 The Borrmann classification divides advanced gastric cancer into 4 types based on their macroscopic (gross) appearance:

Classification based on location:

Note: The frequency of distal gastric cancer has declined, which is attributed to the implementation of eradication therapy for H. pylori infections.

Note: Cancer of the gastroesophageal junction has become increasingly frequent. Over the past several years, the incidence of gastroesophageal cancer has sharply risen. Even after stage T0 resection and the wide application of lymph node dissection, the recurrence rate is high at this specific tumor location.

The Siewert classification for adenocarcinoma of the gastroesophageal junction (AEG) is as follows:

Histologically, the degree of differentiation (grading) of the tumor is determined from G1 to G4, with G1 being well-differentiated and slow-growing with a good prognosis and G4 being undifferentiated, aggressive, with a poor prognosis.

T = Primary tumor according to the depth of infiltration

Following surgery, the residual tumor is assessed according to the R classification:

The standard therapy for gastric cancer is the complete surgical resection – R0 – of the tumor. In most cases, R0 resection means performing a gastrectomy; the total removal of the stomach to include the greater and lesser omentum and the lymph nodes. Smaller early cancers that are limited to the mucosa are also suitable for endoscopic removal. Starting with stage T3, multimodal therapy, consisting of perioperative chemotherapy and surgical intervention, is recommended.

In cases of gastroesophageal junction cancers, a distal esophagus resection is additionally performed. In later stages, once the tumor has already metastasized, an attempt is made to extend survival through palliative chemotherapy.

The prognosis of gastric cancer largely depends on the stage of the tumor at the time of diagnosis. Carcinoma in situ has a 5-year survival rate of 100% and, with regard to pT1N1M0 and pT2N0M0, it is still at 70%. In all advanced stages, the deciding factor is how resectable the tumor is. If R0 resections have a 5-year survival rate of up to 45%, this rate decreases to almost zero with R1 and R2 resections!

Note: Following a gastrectomy, patients receive nutritional counseling. Furthermore, they will have to substitute Vitamin B12 and pancreatic enzymes for the rest of their lives.

Benign gastric neoplasms (polyps, cysts, hamartoma) are often found incidentally and are usually asymptomatic. They are rarer than malignant neoplasms and do not have the ability to infiltrate or metastasize. If they grow expansively, dysphagia, bleeding, and symptoms of pyloric stenosis may occur, depending on the location of the tumor. Therapy options consist of endoscopic or surgical removal of the tumor.

GISTs are mesenchymal sarcomas that frequently occur in the stomach and small intestine. It is unusual to find GISTs outside the stomach, i.e. in the omentum or peritoneum, in which case they have a far more negative prognosis.

The incidence of GIST is 1 in 100.000 annually. GIST diagnosis is confirmed via imaging procedures, such as CT, MRT, and PET, as well as a biopsy to provide histological findings. Ninety percent of these tumors express the antigen CD117, which is part of the c-KIT receptor. The therapy and prognosis of GIST significantly depend on the size of the tumor and its mitotic index. 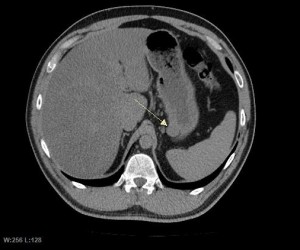 Small R0 resectable tumors that may have been treated with neoadjuvant therapy have a good chance of healing. Inoperable GISTs are preferably treated with tyrosine kinase inhibitors, such as imatinib. These tumors develop hepatic and peritoneal metastases. Most GISTs are found incidentally due to their nonspecific vague symptoms, in some cases, there may be bleeding.

Other tumors may affect the stomach as well, i.e. MALT lymphoma, which is considered to be part of the non-Hodgkin lymphomas.