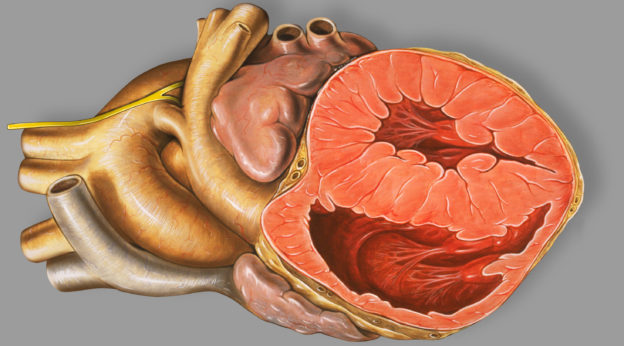 What is the Frank-Starling Mechanism? 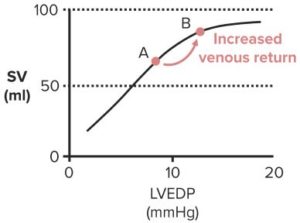 The Frank-Starling mechanism is a regulatory mechanism of the heart. It gets activated when the heart needs to pump an increased blood volume following increased venous return. That way, the law of continuity is maintained.

If the right ventricle is pumping more blood than the left ventricle, congestion in the pulmonary circulation would be the consequence. The lungs’ vessels would have to take up more blood, causing pulmonary edema. Similarly, if the right ventricle pumped less blood than is required to sustain left ventricular function then, edema in the extremities would appear. Hence, a balance is important to maintain circulation.

Work Diagram of the Heart

Before clarifying how the mechanism works, 1st the normal functioning of the heart without any load is shown in a volume-pressure-diagram (see work diagram of the heart): 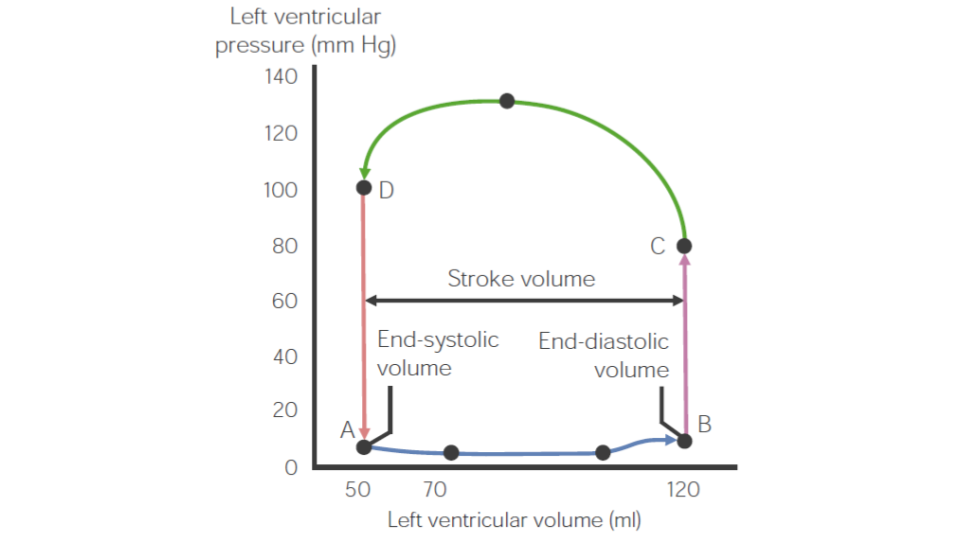 During systole, the blood is ejected. The volume decreases while the pressure keeps rising to later decreased at point D, marking the end of systole.

The myocardium relaxes and the pressure decreases. The volume, however, remains constant until blood flows from the atrium into the ventricle through the atrioventricular valve.

Diastolic filling begins at point A. See that end ventricular volume is never 0, since the ventricle never empties completely but always ends up with a residual volume.

After connecting points A-D, the resulting area A1 approximately indicates the work provided by the heart. Area A2 shows the diastolic work. The change in volume from point C to D is equivalent to the stroke volume.

The following curves, acquired through experimental studies, can be inserted into the work diagram:

Resting tension curve: This curve is obtained after filling the heart with a certain amount of liquid and measuring the resulting volume. With the increased volume, myocardial extensibility decreases, and the pressure rises rapidly.

Isovolumic peak curve: While the volume does not change, the pressure rises to a maximum due to the contraction of the heart.

Isotonic peak curve: At a certain constant pressure, the stroke volume is determined by using a point on the resting tension curve.

Adaptation of heart activity is necessary for a change of preload and afterload.

The preload is the volume load at the end-diastolic phase (point A). Increased preload is equivalent to a higher volume strain. In diastole, the ventricle is filled with more blood.

The afterload is the resistance that the heart must overcome to pump blood out of the heart chambers during systole. It is equivalent to the pressure inside the aorta. Increased afterload results in a higher pressure burden for the heart – it has to pump against a higher resistance.

The Frank-Starling Mechanism in Charge of Preload

No matter what, the heart has to do more work during increased volume or pressure strain, to maintain a balance between blood inflow and blood ejection. The easiest way to learn that is to draw a work diagram by yourself by following these instructions:

The end-diastolic volume is increased:

If more blood flows into the right ventricle in diastole, the myocardium is pre-stretched more. This enables a higher tension growth to raise stroke volumes.

Image: Effects of preload on PV loops. By Lecturio

The Frank-Starling Mechanism in Charge of Afterload

The pressure strain is transformed into a volume strain.

Image: Effects of afterload on PV loops. By Lecturio

Leave a Reply to Huezin

One thought on “Frank-Starling Law — Preload and Afterload”