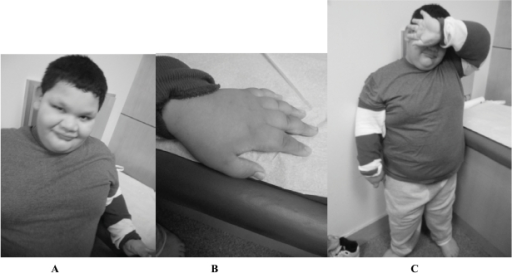 Single gene disorders are caused by a mutation of a single gene with very little influence from other genes. The disorders show single patterns of inherited genes dominated by Mendelian laws.

These disorders occur in approximately 1% of the general population. It is easy to detect them, track their inheritance through generations of the same family, and predict the risk of inheritance because only one single gene is responsible.

Although a single gene causes these conditions, they can also be caused by different mutations that lead to varying phenotypic manifestations and severity because of environmental and genetic variations. Single gene disorders can be classified as dominant, recessive, or X-linked and can be diagnosed with genetic tests.

Huntington’s disease is an example of a dominant disorder. The affected individual inherits one mutant gene and one normal gene and is, therefore, heterozygous. Since copies of these defective genes occur in autosomes, the inheritance is equally present in males and females. The mutant gene is dominant over the normal gene, so clinical manifestations of the disease occur in every generation of the family. The genes are transmitted from parents to their progeny during pregnancy, and there is a 50% chance that the progeny will inherit the disorder.

An individual who inherits two copies of the mutant gene is considered “homozygous” and has more severe manifestations of the disorder. 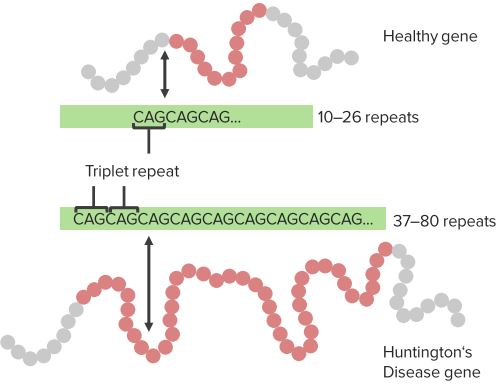 Huntington’s disease presents when an individual presents too many copies of the DNA sequence known as ‘CAG repeats’. Image created by Lecturio

Sickle cell disease is an example of a recessive disorder. The manifestations of the disorder are observed only when an individual inherits two copies of the mutant genes, i.e., is homozygous. The presence of a single healthy gene will mask the effects of the mutant gene. However, if both genes are abnormal, then symptoms of the disease appear. Recessive disorders are likely to occur in consanguineous relationships, i.e., if the parents are related. The chances of inheriting the defective gene are 25% during pregnancy when both the parents are carriers of the mutated gene.

Recessive genes are more difficult to detect because their features may not have manifested and, as a result, they may appear to have skipped a generation in a genealogical tree.

X-linked disorders are single-gene disorders that occur because of a mutant gene located on the X chromosome. It can be inherited in either a dominant or recessive pattern. Hemophilia and Duchenne’s muscular dystrophy are examples of an X-linked recessive disorder that is seen more frequently in males. The mutant gene is passed by the mother to her male progeny, who manifests the condition’s clinical features.

X-linked dominant single-gene disorders, e.g., Rett syndrome, are rare and have identical incidence in males as well as females. Here, women have a 50% chance of passing the gene to their daughters or sons during each pregnancy. Men with X dominated mutated genes transmit the condition to their daughters instead of their sons.

A TRE refers to three nucleotides that repeat consecutively within a region of DNA. Several human disorders are caused by a trinucleotide repeat expansion, which occurs in various cells, depending on the gender of the parent transmitting the mutation. Almost 14 disorders are linked to TRE. Six disorders are distinct from one other, while eight disorders share an identical codon, CAG, as their underlying cause. CAG codes for the amino acid, glutamine. Hence, these disorders are called ‘polyglutamine diseases’.

However, these repeats are located on different chromosomes, so the eight diseases are different. However, their major clinical manifestations are similar – progressive neurological degeneration beginning in mid-life or early adulthood. Examples of these eight disorders include Huntington’s disease, Spinobulbar muscular atrophy, and Spinocerebellar ataxia type 1 to type 7.

Huntington’s disease is a neurodegenerative disorder caused by a polyglutamine trinucleotide repeat expansion disorder due to CAG repeats. It damages brain nerve cells and gets worse over time. The onset of symptoms typically starts between the age of 30 and 50 years. Men and women are affected equally. The clinical manifestations of the disease include movement, cognitive, and psychiatric symptoms.

This is a non-polyglutamine trinucleotide repeat expansion disorder involving the CGG codon, which causes moderate intellectual disability and is considered an autism spectrum disorder. Excessive methylation of cytosine within the FMR1 promoter region leads to condensation of the chromatin with resultant gene silencing. The condition is named after the FMR1 gene that is located on the X chromosome. It exhibits a dominant pattern in X chromosomes. 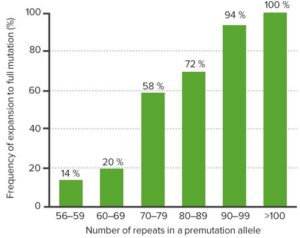 Graph representing the number of CGG repeats in relation to the expansion to full mutation fragile X syndrome. Image created by Lecturio

Affected individuals can have more than 200 and up to 1000 repeats, while asymptomatic individuals have between 53 to 230 CGG copies. Clinical features of Fragile X syndrome include long, prominent pinnae, mental retardation, involuntary hand movements, and hyperactivity.

Fragile X syndrome typically affects males. Males transmit the defective mutated genes to their daughters, not their sons. A carrier mother has an increased risk of affected offspring.

Mitochondrial disorders are inherited from the mother because the mitochondria are part of the ovum during fertilization. A father who has a mitochondrial mutation cannot transmit the mutation to his progeny. The mitochondria have their own DNA, which mutates at a rate greater than 20 times that of nuclear DNA.

Inheritance of mitochondrial disorders includes autosomal dominant, autosomal recessive, and X-linked recessive. They can affect different organ systems and affect males and females equally. Onset can occur at any age. Their phenotypic expression can differ in individuals of the same family and depends on the type of mutation, the prevalence of mutant mitochondria (whether homoplasmy or heteroplasmy), and the affected organ.

Carriers of the mutated genes through mitochondria do not suffer from the condition, but they can transmit their genes to their offspring. Among offspring, 25% will develop the disorder, 50% are carriers, and the rest (25%) do not exhibit either the condition or carrier trait.

What are single gene disorders? via yourgenome.org

Mechanisms of trinucleotide repeat instability during human development via ncbi.nlm.nih.gov