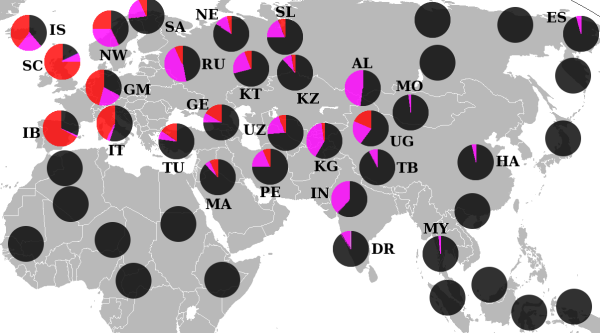 Image: “The distribution of R1a (purple) and R1b (red). Two of the three most common Human Y-chromosome DNA haplogroups in Europe. Black represents all the other haplogroups.” by Dbachmann. License: CC BY-SA 3.0

The rules of inheritance had already been established before the mechanisms in both the cellular and molecular level were ever comprehended. It is important that you memorize the following genetic fundamentals well: 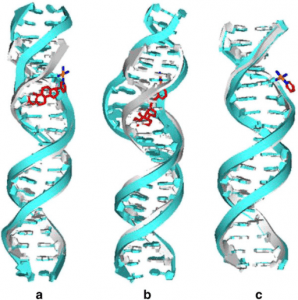 Image: Disturbance of DNA conformation by the binding of testosterone-based platinum drugs via groove-face and intercalative interactions: a molecular dynamics simulation study. By Openi, License: CC BY 2.0

Traits in the phenotype can also be mixed, which is referred to as intermediate inheritance, i.e. height. Expressivity refers to the degree of expression of a trait. Penetrance, on the other hand, refers to the extent to which a trait is present (measured by the proportion of gene carriers).

Conductors are genetic carriers that carry the trait, not in the phenotype but rather recessively in the genotype. Therefore, a conductor can pass on recessive alleles to its descendants without displaying the traits themselves (i.e. red hair). Should a gene control several traits, it is referred to as pleiotropy. Polygenic traits, on the other hand, are controlled by several genes.

The genetic analysis of the origin of the disease becomes difficult if environmental factors are involved – the phenocopies.

Phenocopies can simulate a genetic cause at first.

Iodine deficiency, for instance, can phenotypically be mistaken for cretinism (genetically determined dwarfism). Cretinism is a genetic mutation of the thyroid-stimulating hormone (TSH) or thyrotropin-releasing hormone (TRH) hormone. In cases of iodine deficiency, insufficient thyroid hormones are produced. Both cases lead to hypothyroidism.

The Punnett square, also referred to as combination square, was developed by the British geneticist R. Punnett in order to depict the frequency of genotypes in inheritance.

Another example can be found in the 3rd Mendel’s rule. 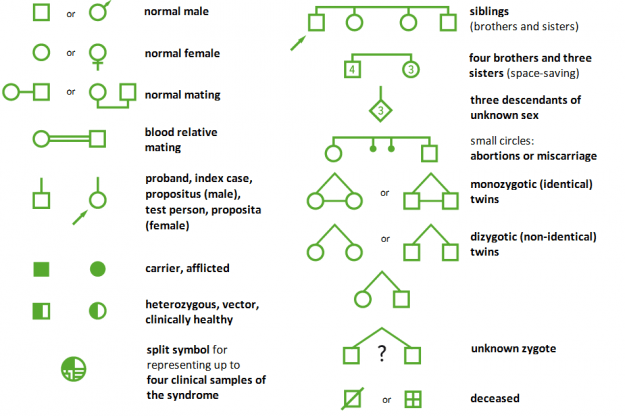 Image: The image depicts the various symbols used in the pedigree analysis. By Lecturio

In our article concerning human genetics, you can read everything regarding pedigree analysis, important diseases as well as many interpretation examples. 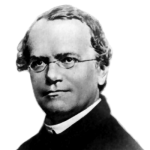 The ‘father of genetics’ Gregor Mendel (1822–1884), an Augustine monk, performed cross-breeding experiments with peas and beans from his monastery’s garden and deduced from them the laws of inheritance that are named after him. In 1865, he presented them for the 1st time in Bruenn, where his discoveries were initially disregarded by experts. Later, Sutton and Boveri postulated the chromosome theory which built on Mendel’s discoveries.

Mendel assumed hereditary factors, which can be passed on by the parental generation to the filial generation. He derived laws that described the inheritance of uncoupled autosomal genes based on statistical laws. 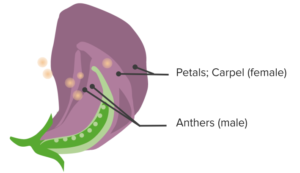 Image: The image showing the female and male portions of the pea plant that allow for self-fertilization. By Lecturio

Note: Mendel’s laws are indispensable for the construction and interpretation of pedigrees and the calculation of probabilities.

Reason for the pea plant

The self-fertilization occurs unless altered. Mendel cross-fertilized plants that were true-breeding. 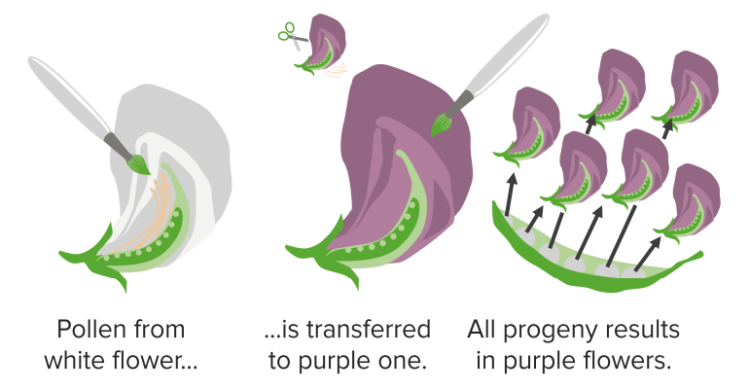 Image: The image shows the process for cross-fertilization of white and purple pea plants with the production of all purple progeny. By Lecturio

If both homozygous parents carry different alleles of a trait, the F1 generation will be uniformly heterozygous. This rule applies independently from the hereditary type (dominant/recessive, codominant or intermediate).

If the heterozygous F1 hybrid generation is crossbred, the F2 generation is split phenotypically according to a certain number ratio (1:2:1 or 1:3).

Image: Principle of segregation: alternative alleles for a character segregate from each other during gamete formation and remain distinct. By Lecturio 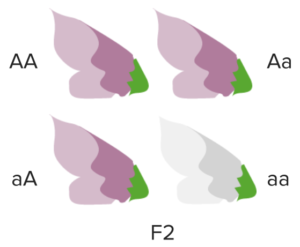 Image: The image depicting the 3:1 ratio associated with independent assortment in the F2 generation. By Lecturio

So far, Mendel had examined the characteristics of the inheritance of 1 single trait. After that, he analyzed plants that had 2 different traits. Here, he also discovered that the F1 generation was identical genotypically as well as phenotypically. If he crossed the F1 hybrids anew, however, new trait combinations appeared in the F2 generation.

Mendel’s conclusion: The 2 traits are inherited independently of 1 another.

If individuals, whose genetic makeup differs in several traits, are crossed, the individual traits are inherited independently of each other according to Mendel’s first and second rules.

Exception: Neighbouring genes are inherited together as a coupled group. (Therefore, Mendel’s achievements were recognized only posthumously because his discoveries could not be completely verified due to these limitations.)

The following is only applicable to a certain extent as well- the coupled inheritance of allele combinations is interrupted by crossing-over. The crossing-over frequency increases in proportion to the distance of 2 genes within a chromosome.

Image: Examination of 1 trait through 2 and 3 generations. By Lecturio

When studying population genetics, it is not the individual that is the focus but rather the larger groups of individuals that reproduce together. This population provides a common gene pool. The gene pool contains several alleles of 1 gene and the relative proportions of these alleles are termed as gene frequency. Gene flow is created when individuals migrate into or away from the population.

In 1908, Hardy and Weinberg found (independently of 1 another):

The frequencies of alleles and genotypes remained constant over generations within a population if the genetic recombination took place according to Mendel’s rules without any export out of or import of genes into the existing gene pool. Hence, a mathematical model can be derived via the probability test: the Hardy-Weinberg equation.

With the aid of the Hardy-Weinberg equation, population geneticists are able to calculate what percentage of a certain disease is contained in a gene.

If gene A and gene a are distributed in a population which is constant, the following applies:

Gene frequency according to the Hardy-Weinberg equation

The frequencies result from the Punnett square.

The Hardy-Weinberg applies if:

These prerequisites only apply to a shorter observation period. Changes in the gene pool always occur over longer periods of time.

Question: In a population, the dominant allele is present with a frequency of 60% in the gene pool. How does the distribution of the possible genotypes within the population look like?

Over longer periods of time, the gene pool of a population always changes – genes are imported or change due to coincidental new mutations. Natural selection favors individuals with a genetic composition that secures the survival and reproduction chances or even increases them. Their genes will occupy a growing share of the gene pool over a longer period of time.

If the genes that offer survival advantages are dominant, they spread rapidly. On the other hand, dominant genes that are disadvantageous to the individual, disappear quickly. Recessive genes remain longer in a population.

Sickle cell anemia is an example of a regionally frequent gene defect, which offers its carriers a selective advantage. Sickle cell anemia, hemolytic anemia, is especially prevalent among black Africans. Heterozygous carriers, who carry the sickle hemoglobin (HbS) gene, have a higher resistance to malaria than non-carriers. Thus, through their selective advantages, the conductors in malaria-endemic regions receive a high share of the HbS gene in the gene pool of the population.

You have already come across the term polymorphism under genetic fundamentals. Genetic polymorphisms are categorized in the ‘normal’ range. Various alleles mutate incidentally and cannot be considered as pathological. If these varying genotypes occur frequently, however, they are referred to as polymorphisms.

Proteins and enzymes are not functional in all variables but rather only in certain configurations. An enzyme/protein polymorphism exists if the polymorphism is of consequence in the genome as well, meaning the gene products can thus be differentiated, i.e. in an enzyme.

The combination possibilities of the variables mean biochemical individuality for every human being.

Every human being can be identified through the ‘genetic fingerprint’.

The only exception is in identical twins: They have an identical genome.

In uniparental disomy, both chromosomes of a homologous chromosome pair come from 1 parent. This leads to a disruption of genomic imprinting. One should differentiate between its 2 forms:

Failure of genetic expression or overexpression of genomic imprinting can lead to certain diseases, i.e. Prader-Willi syndrome or Angelman syndrome.

The disruption of imprinting caused by uniparental disomy is not passed on to the next generation. The expression of genetic information takes place anew and there is no increased risk of recurrence in families.