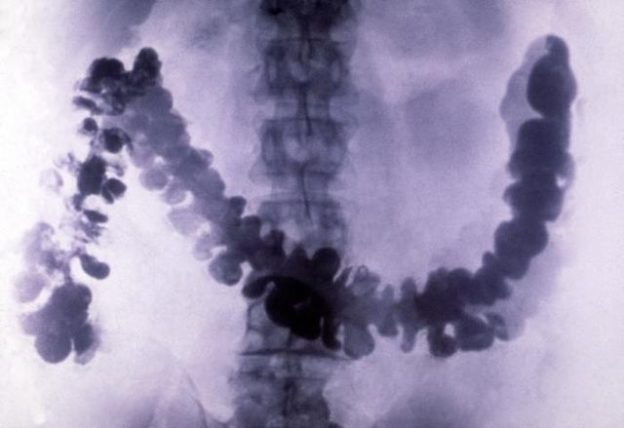 Fluoroscopy and Its Safety

Fluoroscopy uses conventional X-rays to obtain live still pictures or a video of the patient’s body. At one time, fluoroscopy was associated with high doses of radiation. However, recent modifications of fluoroscopy equipment minimize the amount of radiation and lower the associated risks.

Modern fluoroscopy machines have a display that shows the duration and cumulative radiation dose to the patient. This can guide the making process of the doctor’s decision and can make the doctor terminate the procedure if the duration is considered too long.

Fluoroscopy machines now use better X-ray filters to minimize radiation injury with lengthy procedures. Additionally, the irradiated fields now are much smaller than in the past. Images can now be digitally stored, which means the doctor can refer to previous images without re-exposing the patient to radiation again. Finally, accurate laser localization is now used to identify the target precisely so that unnecessary repetitions can be avoided.

Today, fluoroscopy is used for diagnostic applications, including cardiovascular interventions, to monitor catheter introduction and diagnosing gastrointestinal disease. It is considered inferior to endoscopy, which can also be therapeutic. Additionally, fluoroscopy uses ionizing radiation, so it is contraindicated in pregnant women.

Esophageal functional and motility disorders can be visualized and assessed with fluoroscopy. Barium is used to make the stomach, esophagus, or oropharynx opaque to X-rays; however, if it leaks from a perforated viscus, it leads to barium toxicity. Thus, its use in clinical practice is becoming less common.

Patients presenting with heartburn or other symptoms suggestive of gastroesophageal reflux disease should undergo an upper gastrointestinal series study with contrast enhancement.

The main goal of the upper gastrointestinal series is to identify the anatomy of the esophagus and exclude strictures. Barium esophagograms, or barium swallows, are the main methods used to identify structural abnormalities of the esophagus, esophageal hiatus, strictures, ulcers, or hiatal hernias. 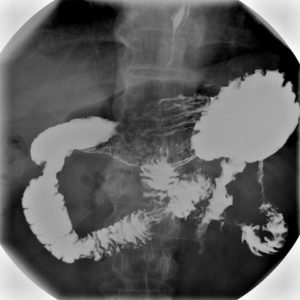 Image: “X-ray of the stomach with both positive (bariumsulphate) and negative (CO2)contrastmedia” by Lucien Monfils. License: CC BY-SA 3.0

Typically, the barium esophagogram is performed on multiple phases. The patient is instructed to swallow a high-density barium solution, and double-contrast views are taken with the patient in the upright and prone positions. A lower-density barium suspension is also used in the subsequent step. Finally, mucosal relief images are obtained.

While these images can be obtained with routine radiographs, fluoroscopy makes it easier to visualize the reflux part of the disease. Additionally, fluoroscopy can produce a live video of the barium swallow study. However, the degree of confidence fluoroscopy results is low. Therefore, these studies are usually used to detect severe esophageal lesions that are known to complicate the endoscopy procedure afterward but are not specific enough to confirm a diagnosis of esophageal reflux disease. 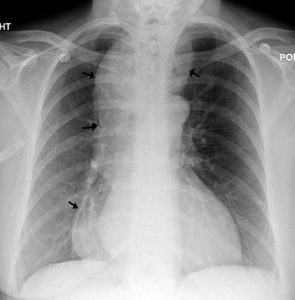 Achalasia is an esophageal motor disorder that is characterized by an increased tone in the lower esophageal sphincter. Peristalsis movements are absent in the distal portion of the esophagus, and the lower esophageal sphincter tends to show poor coordination with swallowing in the patient. Patients with achalasia present with dysphagia to solids and liquids, chest pain, and regurgitation that are unresponsive to proton pump inhibitors.

Use of barium in atypical presentation

Unfortunately, this typical picture is not seen in all patients with achalasia. Patients with less than optimum imaging benefit from barium swallow and esophagogram studies, especially when combined with fluoroscopy. The barium study’s goal is to provide supporting evidence for the diagnosis of achalasia.

The main findings of barium swallow studies in achalasia include the bird’s beak deformity and esophageal dilation. The correlation between the degree of esophageal dilation and the severity of the symptoms is not always straightforward.

Patients with a normal barium swallow study who have symptoms and signs of achalasia should still undergo esophageal manometry testing and possibly endoscopy.

Patients with symptoms and signs suggestive of esophageal obstruction should also undergo a computed tomography scan to exclude esophageal carcinoma, strictures, or other malignant diseases. Oral contrast with computed tomography scanning of the upper gastrointestinal tract can provide excellent images for 3D reconstruction of the upper gastrointestinal tract.

This technique is no longer used in clinical practice because the diagnostic yield of small bowel follow-through ranged between 0 and 20%. Computed tomography enterography and capsule endoscopy provide more reliable diagnoses. The small bowel follow-through used contrast to visualize the stomach and the upper part of the small intestine to rule out conditions such as duodenal disease.

A barium enema is no longer commonly used to evaluate patients for colon cancer because of its very high false-negative rate (22%). Colonoscopy, computed tomography scans, and magnetic resonance imaging studies are now standard practices. If a colonoscopy is incomplete, a double-contrast barium enema should be performed.

After the barium enema, a carcinoma can appear like an apple core lesion with the fluoroscope. This is due to stricture formation and ulceration. Polyps and adenomatous polyposis can be visualized easily with a barium enema study.