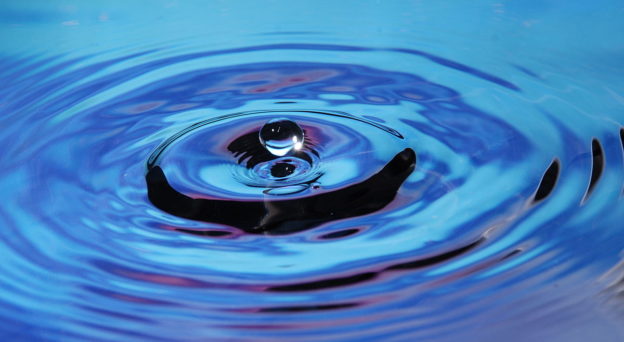 Pressure is defined as a continuous physical force that is exerted on or against an object by something that comes in contact with it. It can be described as the force per unit area. This concept is important in medicine, especially when dealing with blood flow (cardiovascular system) and with airflow (respiratory system).

Imagine a beach ball full of air. The air inside keeps the ball inflated. Inside the ball, collisions take place against the wall of the ball that apply force. Only those collisions that are perpendicular to the wall have an effect. The air molecules moving along the sidewalls will not influence the balloon staying inflated.

The pressure formula is stated as P = F1 / A where P is the pressure, F1 is the force and A is the area involved. Looking at the units, we get:

Pressure is measured in the Pascal units. 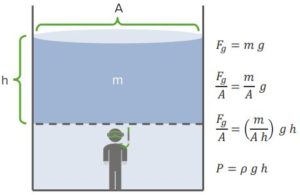 When you go underwater, there are two weights acting on you from above: the atmospheric pressure and the water pressure. The water pressure is referred to as hydrostatic pressure or Gauge pressure. It is denoted as P = ρ g h, where ρ is the density of the liquid medium, g is the gravitational force, and h is the height of water above the person. So, the total pressure exerted on a person underwater is:

The famous Greek mathematician Archimedes stated that anybody, completely or partially submerged in a fluid at rest, is acted upon by an upward (buoyant) force. This force is equal to the weight of the fluid that the body displaces. Buoyancy occurs because the pressure of the water underneath is greater than the pressure of the water above. When measuring the displaced water, the calculation is based on the volume of the object that was submerged. The pressure acting upward is FB = buoyant force and the pressure acting downward is Fg = gravitational force.

An object will float if:

How much of the object will emerge from the water?

If an object is floating, it will emerge from the water until:

French scientist Blaise Pascal discovered an interesting phenomenon we now know as Pascal’s law or Pascal’s principle. It states that pressure is equally distributed throughout a fluid. In a fluid at rest in a closed container, a pressure change in one part is transmitted without loss to every part of the fluid and to the walls of the container.

In order to determine the pressures and forces associated with Pascal’s Law, the following must be observed:

Since the pressure is equally distributed throughout a fluid, P1 = P2.

Since pressure is related to force and area, then the following relationship occurs:

Pascal’s law is useful in machinery that uses hydraulics (the science involving the mechanical properties and uses of liquids). In these scenarios, one can gain a mechanical advantage by making one area greater than another, such that:

Ideal flow deals with an ideal fluid— one that is incompressible, not viscous, and laminar without turbulence. Liquids do not have the ability to be compressible, unlike gases. The flow in liquids occurs due to the lack of viscosity. The ideal flow must be laminar and orderly without turbulence or chaos. In general, laminar flow occurs at lower velocities and is smooth, not rough.

The flow rate is the amount of fluid that flows at a given time. It is calculated as follows:

Daniel Bernoulli explained an important principle in fluid dynamics. His principle stated that an increase in the speed of a fluid occurs simultaneously with a decrease in pressure or a decrease in the fluid’s potential energy. At any portion along the tube, energy is conserved.

A pitot tube is a pressure measuring instrument used to measure fluid flow velocity. The basic setup consists of a tube pointing directly into the fluid flow. As this tube contains fluid, pressure can be measured. The moving fluid is brought to rest (stagnates) as there is no outlet to allow flow to continue. This pressure is the stagnation pressure, or total pressure, of the fluid.