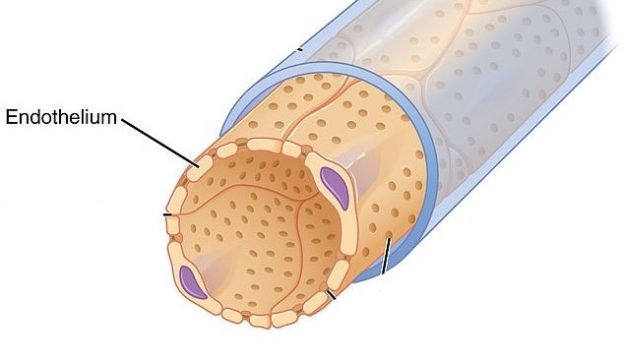 The endothelium is the innermost layer of a blood vessel. It is a thin layer of simple squamous cells called endothelial cells. In arteries and veins, the endothelium is surrounded by a thick muscular and an elastic layer.

However, capillaries are made up of a single layer of endothelial cells. They are the site where a rapid exchange of substances occurs. For example, skeletal muscles require glucose and oxygen for rapid respiration, which is transported to them as the blood flows through the capillaries. 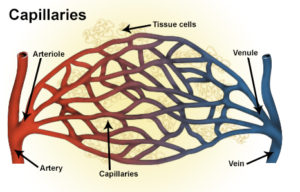 Capillaries can be divided into the following three types, based upon the arrangement of endothelial cells.

Continuous capillaries have an uninterrupted lining of endothelial cells. These allow only the smallest molecules and ions to pass through their intercellular clefts. However, lipid-soluble molecules can easily pass through them. These capillaries are found in the skeletal muscles, central nervous system, skin.

Fenestrated capillaries have several pores measuring 60-80nm nanometers) in diameter in their endothelial lining. These pores have a thin layer of fibrils that limit the movement of proteins. Such type of capillary is found in the glomeruli of kidneys, endocrine glands, intestines, and pancreas.

Sinusoidal capillaries, also known as discontinuous capillaries have relatively larger openings in their endothelial lining measuring 30-40μm (micrometers) in diameter. The basal lamina (or basement membrane) is also discontinuous. Blood cells and proteins can easily move out of these capillaries. Such capillaries are found in the liver, spleen, bone marrow and adrenal glands.

Fenestrated capillaries are able to move larger molecules in and out and therefore do not require carrier proteins. However, the movement of molecules is dependent upon three factors:

Smaller molecules such as oxygen and carbon dioxide can easily move by simple diffusion and are not dependent upon the factors mentioned above. Water also moves by osmosis. The phenomenon of osmosis arises from the propensity of a pure solvent (water) to move through a semi-permeable membrane and into a solution containing a solute (e.g. proteins) to which the membrane is impermeable. This process is of vital importance in biology as the cell’s membrane is semipermeable, and there are proteins in the blood as well as in the interstitium.

As mentioned above, the capillaries found in the glomerulus of the kidney are fenestrated capillaries. The basic structure of the filtration unit (membrane) includes:

The cells form foot processes and are therefore called podocytes.

As blood flows into the afferent arteriole it has high hydrostatic pressure. Plasma along with other soluble molecules such as glucose, peptides, amino acids, ions, drugs, and other metabolic waste substances, move from glomerulus into the Bowman’s capsule. Blood cells and proteins are left behind. The fluid that has moved into the Bowman’s capsule is known as the ultrafiltrate. 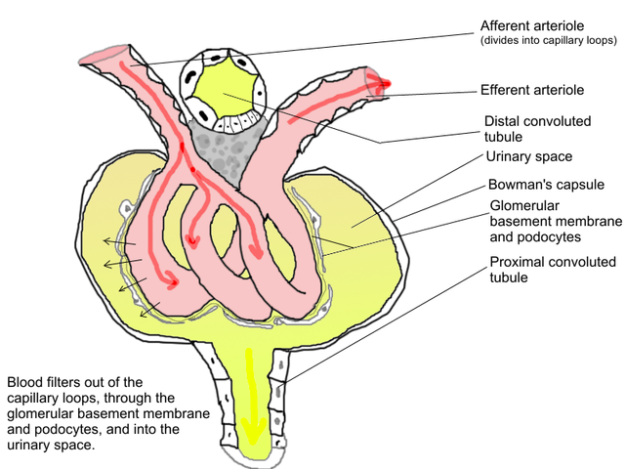 Any disease process that damages the structure of the filtration membrane may cause proteins or red blood cells to spill into the Bowman’s capsule and they will appear in the urine. The conditions are called proteinuria and hematuria, respectively.

Transport across the endothelium

The transcellular pathway transports plasma proteins of the size of albumin or greater via the process of transcytosis in vesicle carriers originating from cell surface caveolae. Specific signaling cues are able to induce the internalization of caveolae and their movement to the basal side of the endothelium. Caveolin-1 is the primary structural protein required for the formation of caveolae.

Caveolin-1 is also important in regulating vesicle trafficking through the cell by controlling the activity and localization of signaling molecules that mediate vesicle fission, endocytosis, fusion and finally exocytosis.

An important function of the transcytotic pathways is to regulate the delivery of albumin and immunoglobulins, thereby controlling tissue oncotic pressure and host-defense.

The paracellular pathway induced in continuous endothelium during inflammation is formed by gaps between endothelial cells at the level of adherence and tight junctional complexes. Paracellular permeability is increased by second messenger signaling pathways involving Ca2+ influx via activation of store-operated channels, protein kinase Calpha (PKCalpha), and Rho kinase that together participate in the stimulation of myosin light chain phosphorylation, actin-myosin contraction, and disruption of the junctions.